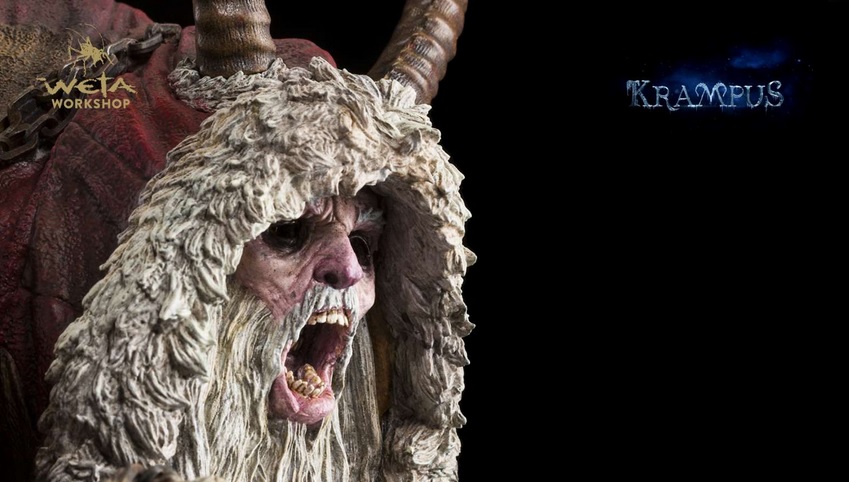 The popularity of the mythical Alpine creature known as Krampus reached a fever pitch last year, and a few films came along to capitalize on the trend. There was the low-budget Krampus: The Reckoning and the (better than you’d expect) anthology A Christmas Horror Story, but it was Trick ‘r Treat director Michael Dougherty who unleashed the definitive Krampus horror film.

Dougherty’s Krampus was a surprise hit at the box office and a huge win in the eyes of fans and critics alike, rightfully taking a spot on many year-end “Best Of” lists across the internet. Loaded with awesome practical effects and armed with a sense of fun not often found in the Hollywood horror films of today, Dougherty’s second feature was indeed one of 2015’s very best horror movies, and like Trick ‘r Treat before it, it’s destined to become an annual watch for fans.

It was New Zealand-based company Weta Workshop that handled the aforementioned practical effects in Krampus, bringing to life all sorts of twisted holiday monsters from Dougherty’s wonderful imagination. From a demonic tree topper to a truly nightmarish jack-in-the-box monster, the creature effects were a sight to behold, and the star of the show was of course the big K himself. Staying true to old-school techniques, Krampus was – believe it or not – played by an actor in a suit.

Who played Krampus, you ask? That’d be Luke Hawker, an actor/stuntman who has been a workshop technician for Weta since the early 2000s. Hawker was kind enough to take time out of his busy schedule to answer some questions exclusively for you awesome Halloween Love readers, and as far as we’re aware, this is the very first interview about Krampus that he has done.

How did Hawker land the role, what was it like playing such a legendary monster, and what is the man behind the mask’s interpretation of the much-talked-about ending to the film? Read on! 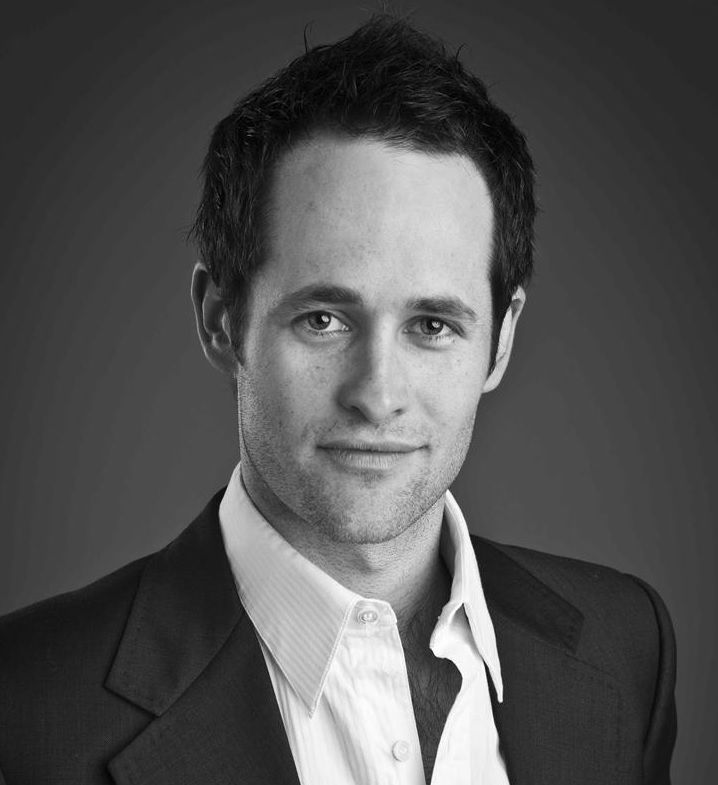 HALLOWEEN LOVE: How did the role of Krampus come to you?

LUKE HAWKER: My day job for the last 16 years has been a technician for Weta Workshop down here in New Zealand and I have worked on films such as Lord of the Rings, The Hobbit, King Kong, and Avatar – I was an actor on Avatar. My agent put me forward for the role [of Krampus] and after I hastily updated my show reel I was asked to audition. The audition, in its usually awkward format, involved jumping off of and crawling out of a table that doubled for a roof top and fireplace and stroking a production assistant’s face whilst pretending I was a seven-foot demon from ancient folkore.

After a long few weeks, where I assumed I had been overlooked, I was finally notified that I was going to be Krampus, and though the physical task was rather daunting to say the least, I was pretty excited. Christmas had definitely come early that year for me!

HL: Had you heard of Krampus (the character) prior to being cast?

HAWKER: I had a vague recollection of the Krampus mythology, though from what source I’m not entirely sure. After researching the character for the film I stumbled across reference to an arcade game called CarnEvil, which was released in the late ’90s and which I remember playing! The big boss at the end of the game (which I must have gotten to, YAY!) was indeed Krampus. Though an antler-adorned, ice-skating, blocky ’90s computer character does not do the amazing mythology justice.

HL: Tell us what it was like getting into the Krampus costume. It looks so large that I was surprised to learn there was an actual person in there.

HAWKER: The Krampus costume was immense. The costume weighed around 40kgs (88 pounds) and had its own metal frame that it hung from on set when I wasn’t wearing it. Because I stand only 5’8” we had a box under the costume and rack that I would use to climb inside the suit and stand on while I strapped myself in. With the base of a strong, close-fitting hiking pack I strapped myself in with the aid of LED torch light that was strategically clipped inside the suit. After this I was then assisted by my amazing Weta Workshop comrades to get into the arm extensions and stilt legs that gave me my 7” tall stature.

Inside the suit I would have one hand to puppeteer either my left or right hand, and the other I would use to drive the head and neck. The back of the head had a small screen mounted inside that was connected to a tiny camera inside one of Krampus’ moles. This is how I saw the entire world and my fellow cast members. Wherever I turned Krampus’ head, I saw [what he saw]. Except of course when I was doing wire stunts – this required the head to be locked off and I saw whatever the heck Krampus’ jostling head was pointing at!

At certain points there was also more than one person in the suit. Kate Venables, a long time performance colleague of mine, was also crammed inside the suit with me to perform the hand that I couldn’t as I was steering the head. Most notably the fireplace scene involved both Kate and I stuffed in the fireplace together, and when walking toward Omi, Kate literally hugged my stilt leg as I slammed my hoof between her feet. She was my right and left hand girl, for sure! 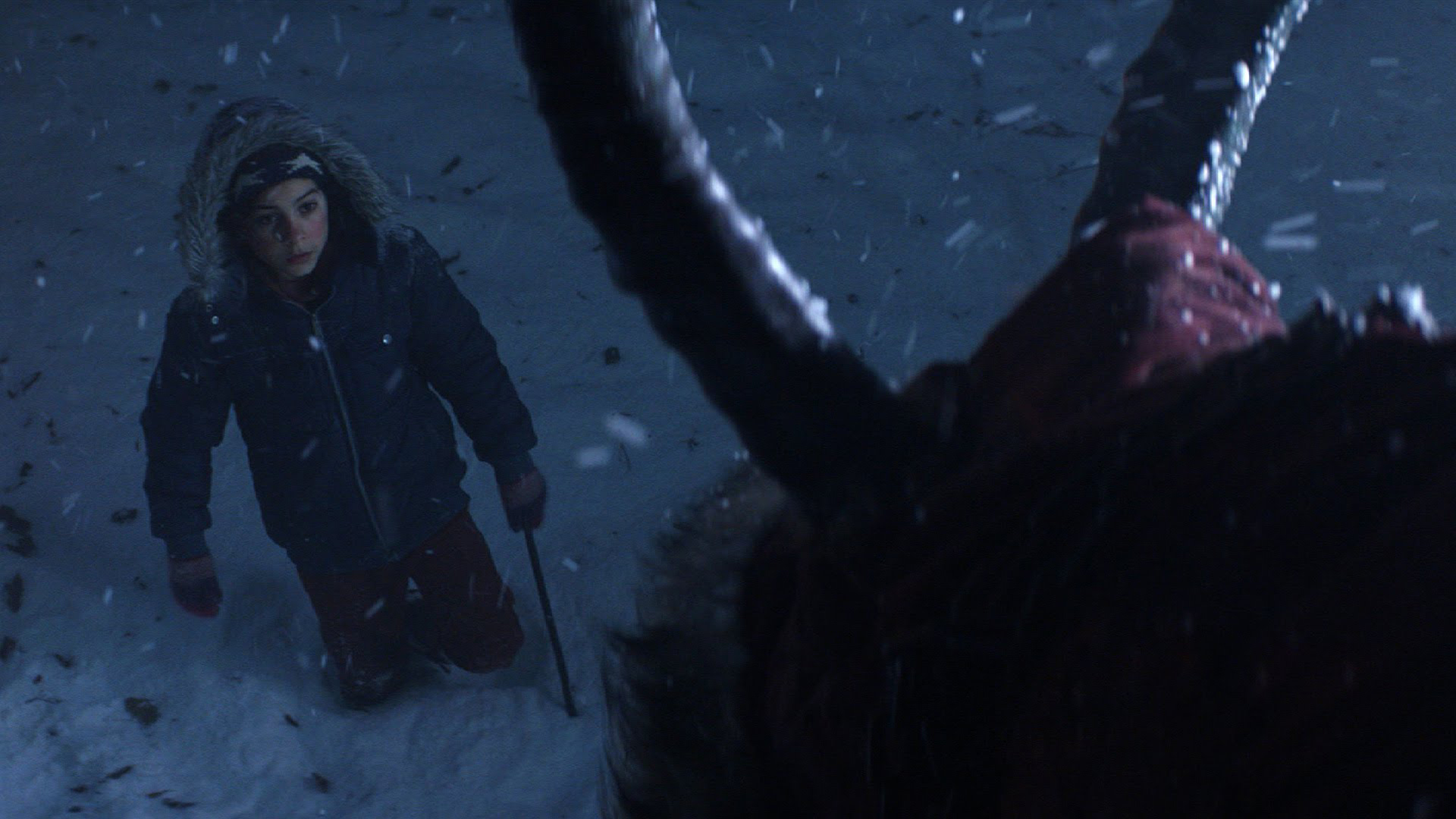 HL: There are a lot of child actors in Krampus. When you walked on set, in full costume, were they scared of you?

HAWKER: Michael [Dougherty] was really keen to make sure the cast saw no designs and no work in progress images of Krampus during filming. And many of them I don’t think actually saw him until the film was released. Emjay [Anthony], who played Max, was the first to see me and it was in the confrontation scene in the snow where I was first revealed to him. He was told to close his eyes during the setup as I was readied for the shot. The cameras rolled and as the take started I slowly stood up from a crouch to my full height in front of him on camera. Although I only had a very small camera in which to view the world, his reaction was priceless.

After we cut Michael asked the shocked Emjay what he thought of Krampus and Emjay responded immediately “I don’t like him.” Perfect!

HL: In the close-up shots we see of Krampus himself, are we looking at a mask or his actual face? He appears to almost be wearing Santa’s face as a disguise.

HAWKER: Ah you have a keen eye! Yes the concept behind Krampus’ ghoulish face is that he has flayed a Santa (or a Santa-like person) and is wearing his face like a mask. Underneath is a beast with cat-like eyes and gnarled yellow teeth. It created a pretty cool effect I think and added a great depth to the backstory of the character. 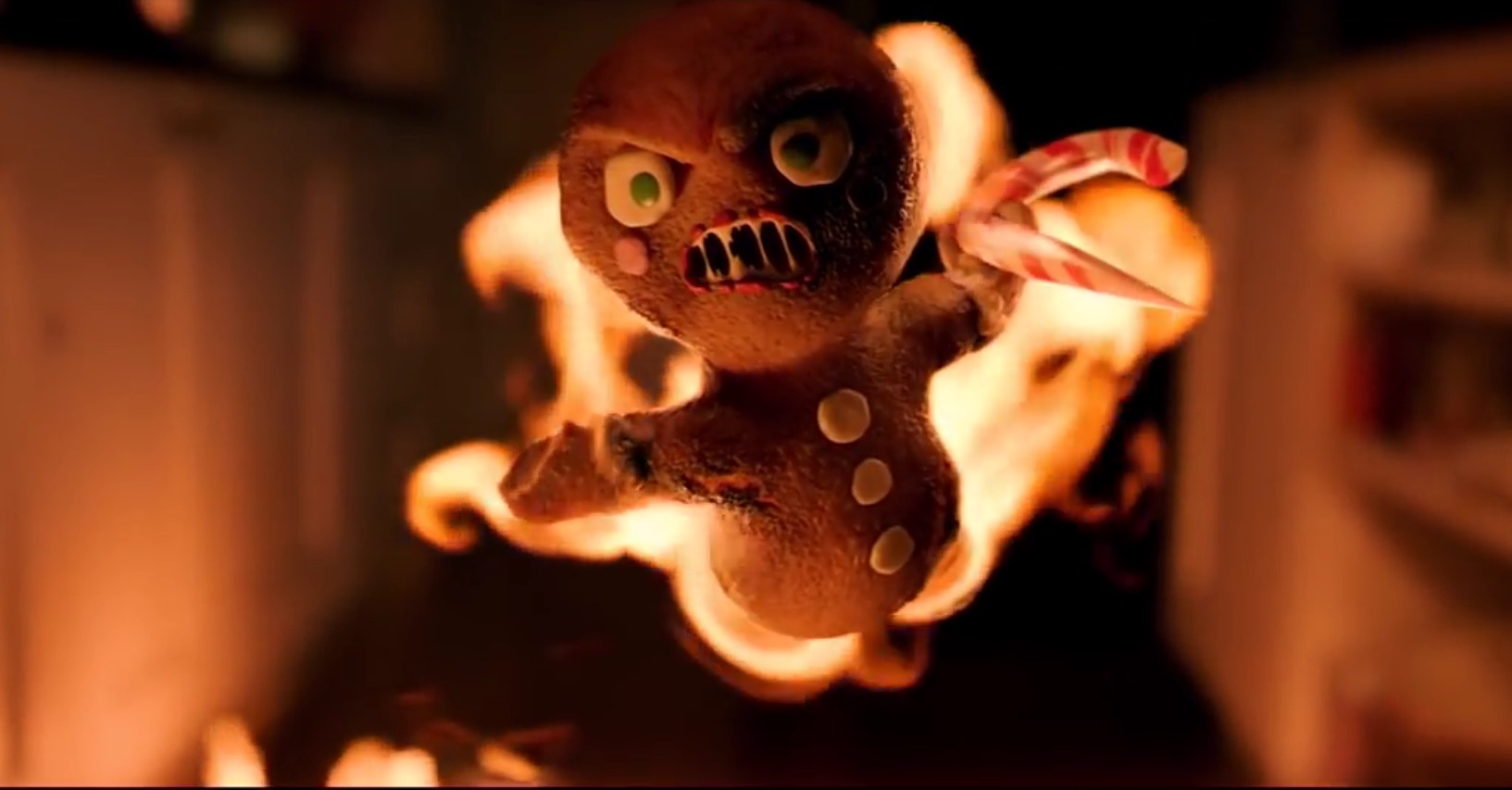 HL: Krampus has all sorts of hellish minions. Do you have a favorite?

HAWKER: I really loved the devilish and cheeky gingerbread men, they were so mental! But I must say the jack-in-the-box was totally creepy. The way he grew from each child he ate, and the snake-like tail with the extended monster jaw. Such a great concept and really cool puppet to see working on set!

HL: Fans are hotly debating the ending of the film. Is it a happy one or a horrifying one? Do you have any thoughts on that?

HAWKER: I think the ending is meant to be ambiguous and I really like that. Much like Inception or even some of the first Nightmare on Elm Street films, the ending is a last taste of the horror theme and leaves you with a resounding feeling and those unanswered questions about what really happened. That said I also really like the idea that they are all trapped in Krampus’ lair and that they live Christmas morning for eternity knowing deep down it’s all a farce.

HL: Any upcoming projects you’d like to promote or tell us about?

HAWKER: I’d love to tell you about the projects I’m currently working on but unfortunately I can’t due to confidentiality. Though for the next couple of films I will be behind the camera working with Weta. They are some pretty amazing projects that fans are going to go crazy over. I had to pinch myself when I found out what they were, because I of course started life as a fanboy too!

Could one of those top secret projects be Krampus 2? Here’s hoping!