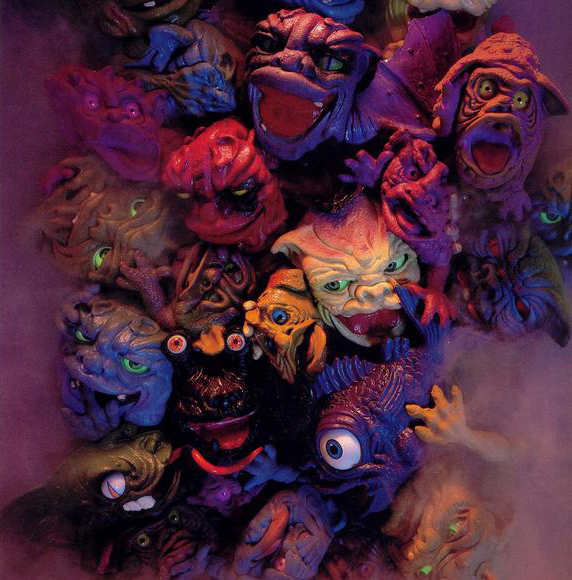 Whenever you bring up the topic of 80s monster toys, there are a handful of lines that immediately come to anyone’s mind who spent a little time in the decade. The cuddly My Pet Monster is of course one, while those gross-out Madballs also rank high up on the list.

Released by Mattel in 1986, the Boglins are another toy line that has become synonymous with the decade’s monster output.

Rubbery hand puppets depicting disgusting-yet-charming bog creatures, Boglins were the brain-child of Timothy Clarke and Maureen Trotto, and they’re without question one of the coolest gross-out lines of all time.

Inheriting a hand-me-down from my older brother, I became a Boglins fan at a very young age and that love has only grown in more recent years, when a yard sale reunited me with my lovable pal Dwork. Just as it was love at first sight when I was a kid, it was love at second sight on that fateful day, and the little guy has become a cherished part of my toy collection.

I’m now approaching 30 years old and you’ll still often find me with my hand up Dwork’s ass, moving around his eyeballs and puppeting his mouth open and closed – which is as much of a testament to my inability to grow up as it is the line’s enduring awesomeness.

Until recently, I admit to having no idea who created the Boglins, but a little digging revealed to me that Clarke was one of the co-creators. Upon finding out that he had a Facebook page, I reached out to him in an effort to speak with the man responsible for one of the world’s coolest toys, and I was delighted when he handed over his number and agreed to a phone chat.

Though I mostly spoke with Tim about the Boglins, my pre-interview research taught me some pretty interesting things about him, and it seems only right that I provide a little history here, before we get into our chat.

So here’s some necessary pre-Boglins backstory, before we pick Tim’s brain about all things Boglins!

Before breaking into the toy business, Tim Clarke was a freelance artist for the Jim Henson Company, doing everything from dyeing Snuffaluffagus’ fur to re-sewing feathers onto Big Bird. In 1982, he designed and fabricated several creatures for The Dark Crystal, and he was also a Muppet designer on the TV series Fraggle Rock. 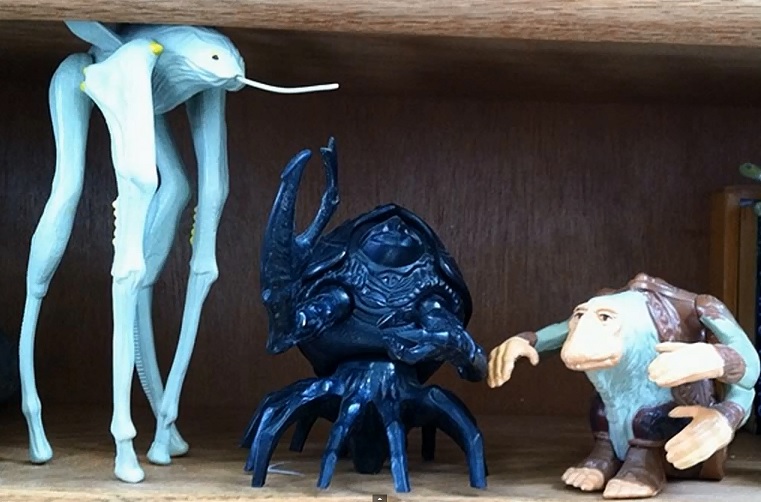 It was after Hasbro picked up the license to The Dark Crystal that Clarke got his first taste of toy-making, tasked by Jim Henson to create prototype figures for the company’s line of movie-inspired toys. The characters of Garthim, a Landstrider and a Mystic were turned into poseable action figures by Clarke (above), though Hasbro ultimately determined that the film was too scary for children, and abandoned the line.

After failing to convince Jim Henson to start his own in-house toy production facility, Clarke and Trotto launched a line of their own called Sectaurs, which were essentially insect puppets that served as vehicles for small action figures. The idea inspired by a puppet he made for one of Henson’s Halloween parties, Clarke eventually sold the concept to Coleco, paving the way for his most monstrous creation…

Putting skills he learned from Academy Awarding-winning makeup FX legend Dick Smith (The Exorcist) to the test, Clarke next set out to create his own line of movie quality puppet monsters, which he hoped would get kids both young and old interested in puppetry.

“Having worked on Dark Crystal and working with foam latex, I always wanted to do a foam latex hand puppet creature, because there was nothing on the market like it,” Clarke told me. “I thought it would be so much fun for kids.”

After receiving a green light on the idea from Seven Towns Agency’s Larry Mass – who had previously sold Sectaurs to Coleco – Clarke got to work (in the pre-Gremlins early 1980s) on two prototype Boglins creations (above), loosely basing their design on the ‘Olmec Colossal Heads’ – 17 stone representations of human heads that were left behind on the Gulf Coast of Mexico, by the Olmec civilization.

Those original prototypes, slightly different from the ones we all know and love, featured a lever in the tail that controlled the opening and closing of the hands, as well as a different mechanism that controlled eye movement. And though Mattel eventually would pick up the line and bring it into our lives, they weren’t the first ones to take a stab at the Boglins.

“Originally, Coleco bought Boglins and wanted to add it on to the Sectaurs line as this big evil monster,” says Clarke. “But the prototype they came back with was horrendous. They had added a body onto it, and the head was connected to the body by a vacuum hose tube. It was just terrible.”

Thankfully, it wasn’t long before Coleco dropped the Sectaurs line and therefore lost interest in the Boglins, leaving Seven Towns free to pitch the concept elsewhere. “Mattel bought it right away,” Clarke remembers, “and we launched at Toy Fair in February of 1985.”

Looking back, Clarke says he’s still amazed at how close the finished Mattel product stuck to his original sculpts, to the point that it’s hard to even tell the prototypes apart from the real things. Though they got rid of the tail lever and changed the eye mechanism – for the better, he says – Mattel pretty much created exact replicas of Clarke’s prototypes, and he notes that both he and Maureen Trotto were “incredibly pleased.”

As for the cage-like boxes the Boglins were housed in, which have become as iconic and memorable as the toys themselves, those were designed by Maureen’s husband Duane Langenwalter, before Mattel entered the deal. Those too were kept much the same way they had been designed, and it’s not a stretch in the least to suggest that the unique packaging played a pivotal role in the success of the line. 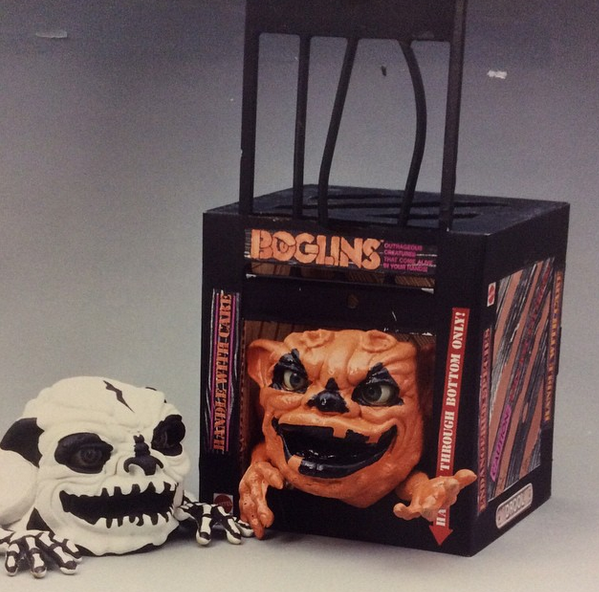 Several spin-off lines followed in the wake of the original Boglins releases, in the late 1980s, my favorite of which has always been the two ‘Halloween Boglins’ – one of which was painted to look like a jack-o’-lantern, the other a skeleton. “It was kind of a kitschy thing to do for Halloween,” Clarke admits, “and I never thought they’d become so popular. But people really loved them.” 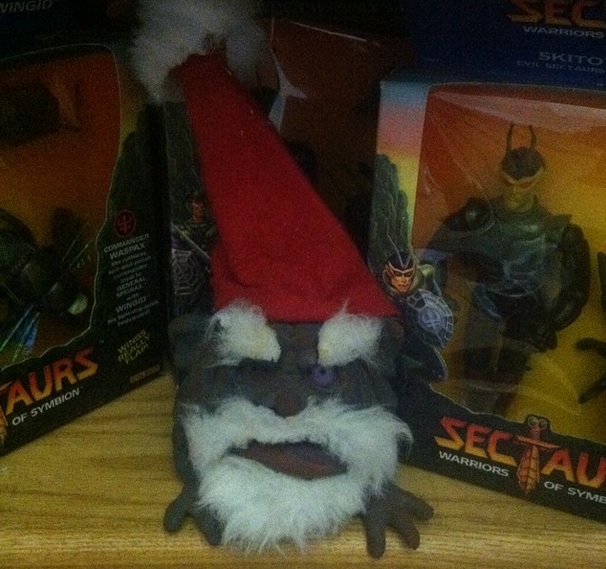 Subsequent spin-off lines included Glow-in-the-Dark Boglins, ‘Soggy Boglins,’ made to look like mutated aquatic animals, and ‘Acrobat Boglins,’ which we’re sticky enough that they could be thrown against walls and crawl down them. One of the ‘ones that got away,’ so to speak, was Clarke’s pitch for a ‘Christmas Boglin,’ creating the crude prototype you see above. Mattel didn’t care for the idea, and that particular spin-off was never produced. 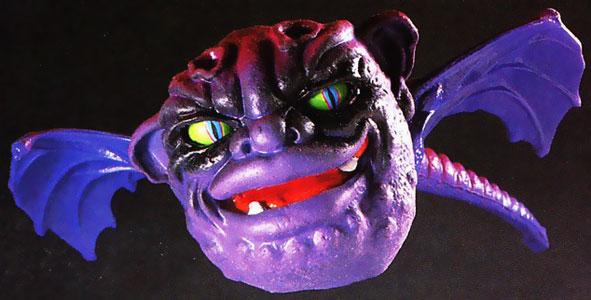 Another noteworthy unproduced line was the ‘Nite Creature Boglins,’ three different creatures that were designed to look like bats. Though there are existing advertising materials promoting the spin-off line, Clarke says they were never in any way actually produced. “Bat Boglins were never done,” he revealed. “There were prototypes made but I never saw them.”

After just two years on the market here in the United States, Mattel lost interest in the line at the tail end of the 80s, which is a shame considering the Boglins were on the verge of really expanding and blowing up.

“Seven Towns had given secondary licensing to Surge Marketing, who designed t-shirts, and all kinds of stuff,” says Clarke. “Mattel, however, wanted to take over all secondary licensing themselves. So they pushed Surge out, and turned around and did absolutely nothing with it. They just dropped the ball completely. Going into the second year, they said Boglins were not big enough to continue, despite having seven million dollars in orders.”

It was at this point that Seven Towns took the orphaned Boglins to UK toy company Ideal, who grabbed the ball and ran with it. Over in Europe, the Boglins became more popular and successful than they ever were here in the states, selling on store shelves for nearly a decade.

“There were line extensions like crazy,” Clarke remembers. “Baby Boglins, Boglins in slime and all kinds of different offshoots. Then they did a whole series of Mini Boglins. There are some that show up online, like one that had an eye that popped out, that were sold in Europe that I didn’t even know about until recently. We were supposed to get samples of everything, but when it went to Europe, they weren’t very good at keeping us up to date with what was going on.”

After lying dormant for a handful of years, the Boglins made their triumphant return in 2000 thanks to the company Action GT, who did a limited run of creatures that lit up and made sounds. More advanced than any of the Boglins that had previously been released, the revival proved unsuccessful, which Clarke blames on both the design and a lack of proper advertising.

“They didn’t have any TV advertising, so they kind of came in and disappeared,” says Clarke. “They just weren’t very popular. The problem was they had a hard mechanism in their heads, to hold batteries. It very much limited the movement of the face, which to me was always the important part of Boglins.”

Over the course of the past decade, Boglins haven’t been seen or heard from, which has needless to say left fans of the line itching for their return. With retro toys becoming all the rage in the last few years, it seems the groundwork has been laid for the Boglins to once again emerge from the bog, and Clarke promises that he is doing all he can to make sure that happens.

“I’m working with a company now on bringing Boglins back, in a couple different ways,” he told me. “I’m constantly negotiating with and pitching to different companies. It’s just hard to get to that next step. People say ‘yes yes yes,’ but then the reality of mold costs come in and they get cold feet. It never comes to fruition. But I think there’s more potential for it to happen than ever before, with the latest company I’m working with.”

Though Clarke is well aware that it’s a long road, and that nothing is ever set in stone, he said that he hopes by next year the Boglins will be back on the market, in some capacity. When I pressed him for more info about the revival, he remained tight-lipped, not spilling many details about the plans he has for the future.

“I have lots of great ideas for things, so we’ll see how things go,” he noted. “If I’m lucky and can get things finalized and organized, we may be able to make some announcements at [New York] Comic Con this October. Right now, the process is taking longer than I expected.”

All Clarke was able to reveal to me is that he hopes the line gives him the opportunity to create Boglins spin-off products that were planned in the 80s but never got off the ground, and he told me that the company he’s working with is interested in possibly even doing an animated series and a line of children’s books.

While we wait for those loveable Boglins to come back into our lives, I encourage you to check out Tim’s latest product Totims, which are sort of monster totem poles in the vein of Boglins. You can also follow Tim on Instagram for all the latest updates, and be sure to poke around there, as he posts all sorts of photographs that all you vintage toy lovers will get a real kick out of.

Thank you for your time, Tim, and VIVA LA BOGLINS!

(Not seeing any relevant products? Start your search on Amazon through us.)