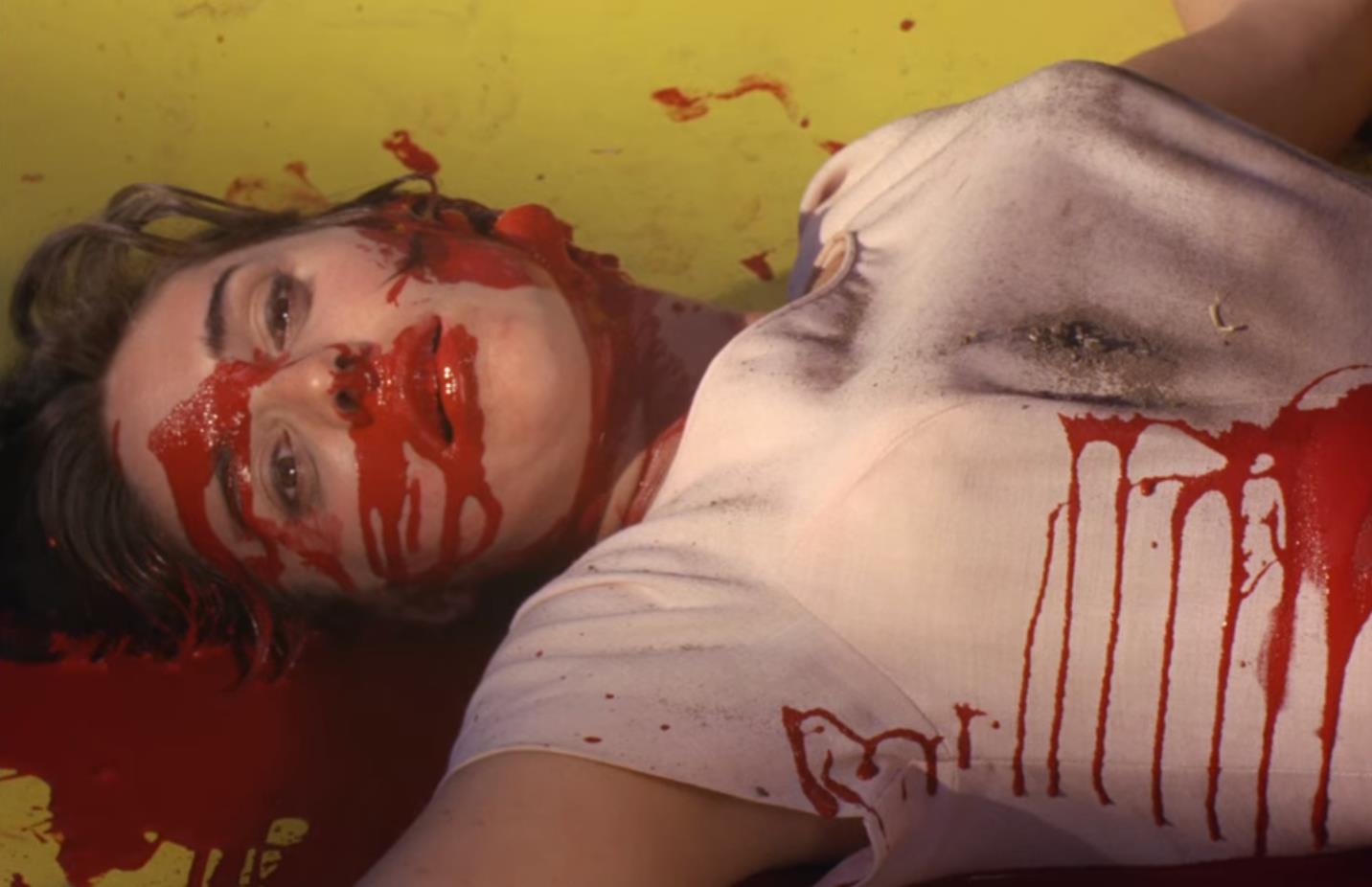 There was a time when the sun did not set on the VHS empire.

Even in a smallish town like the one where I grew up in the 1980s — Flushing, MI, population hovering around 8,000 — there were a few stores that rented VHS tapes. My folks let me get Jason and the Argonauts (1963) from the Silver Screen downtown on my 11th birthday, for instance, and I first saw Krush Groove (1985) thanks to the Video Den across from the local ice-cream parlor. My mom took me to the Curtis Mathes a couple of times. That’s where I first rented The Terminator (1984) and Liquid Sky (1982). Meijer had a pretty decent selection for a while, too. I remember renting every film in the Psycho franchise from them. Sometime in the mid-to-late ’90s, Family Video came in and sort of flattened everybody else. I can still remember how they had Witchcraft (1988) and all its sequels lined up on one long shelf.

To get anything out of the ordinary, though, I knew I had to go to the Michigan Video in Flint. They stocked some more oddball titles, like Phantom of the Paradise (1974) and Shock Treatment (1981), and they were probably the only place in Genesee County that rented laserdiscs. But my all-time greatest find at Michigan Video was Herschell Gordon Lewis’ Two Thousand Maniacs! (1964). At the time, I had no idea who Lewis even was, let alone the influence he’d had on other filmmakers. All I knew was that this tape had tremendous cover art: a leering closeup of a woman’s face with blood trickling out one side of her mouth.

What the hell was this thing? I soon found out.

Loosely inspired by the 1947 stage musical Brigadoon, Two Thousand Maniacs! is about a quaint Southern community called Pleasant Valley that rises mysteriously from the mist every century so that its residents can take revenge for having been wiped out in the Civil War by renegade Union soldiers in 1865. Toward that end, two malicious goons named Rufus (Gary Bakeman) and Lester (Ben Moore) lure some unsuspecting Northerners off the main highway and into Pleasant Valley with misleading road signs. In all, they snare two carloads — one with four passengers, another with two.

Jovial Mayor Buckman (Jeffrey Allen) informs the newly-arrived Yankees that they’re the so-called “guests of honor” at the town’s “centennial.” From there, it’s time to divide and conquer, as Buckman and his cohorts contrive reasons to keep the guests apart from each other and ignorant of the true nature of the celebration. One by one, these unlucky visitors are dispatched in gruesome and sadistic public displays. Two of the brighter captives, Terry (Connie Mason) and Tom (Thomas Wood), eventually figure out what’s happening and skedaddle, barely outrunning a lynch mob. The survivors bring back a baffled cop (Andy Wilson), but by then, Pleasant Valley has retreated into the ether from whence it came.

I’d seen my share of horror films by my teens, both recent and otherwise, but nothing quite like this. For one thing, most of the violence in Two Thousand Maniacs! occurs in broad daylight, right out in the open, complete with gawking spectators. The horror genre has its share of psychotic killers and monsters, but most of them at least have the decency to wait until nightfall and commit their murders in relative privacy. They don’t invite crowds to watch them commit these horrible acts. Not so in Pleasant Valley. The homicide victims in Two Thousand Maniacs! — half of them jerks, half of them nice — are denied even a tiny bit of dignity in their final moments. As they’re being dismembered and squashed, they have to endure the laughter and jeers of the locals.

I suppose, back then, Two Thousand Maniacs! got to me because it presented a level of meanness that I had not previously imagined possible. The nice Northerners aren’t treated any better than the jerks. One of the jerks, Johnny (Jerome Eden), actually gets something like a moment of silence after he’s drawn and quartered. But about 30 seconds later, everyone’s singing “Dixie” and waving Confederate flags around. Lewis, a Pittsburgh native who also scripted the movie, understood that many Northerners have a deep paranoia about the South, and he exploits that to the fullest here. Years before Deliverance (1972), another candidate for the most anti-Southern film of all time, Lewis’ film includes a menacing closeup of a banjo during its main title sequence.

The nicest guy in the movie, mild-mannered David (Michael Korb), gets what I feel is the nastiest death. The good people of Pleasant Valley force David to climb into a bright yellow barrel decorated with little Confederate flags, and Rufus and Lester grab the man’s hands and feet so he can’t free himself. Mayor Buckman drives some long nails into the wooden staves, and he and the others roll the barrel down a hill until poor David is punctured on all sides like a pin cushion. Afterward, Lewis’ camera lingers on the nails dripping with blood.

I’d always assumed Lewis had devised this particular fate himself until I came across a 1954 English language edition of Grimm’s Fairy Tales from Doubleday. In the story “The Goose Girl,” a jealous maid masquerades as royalty while forcing a true princess into humble servitude. The pretender’s punishment at the end is to “be put naked into a cask, studded inside with sharp nails, and be dragged along in it by two white horses from street to street until she be dead.” In “The Three Little Men in the Wood,” a cruel stepmother and her ugly daughter are “put into a cask with iron nails in it and rolled down the hill into the water.”

It really baffles me that, in all the hubbub about Ari Aster’s Midsommar (2019) last year, there weren’t more comparisons drawn to Two Thousand Maniacs! I feel these two films are cut from the same cloth, yet no one dared connect them. Maybe it’s because Lewis and Aster exist at opposite ends of the critical spectrum.

Herschell Gordon Lewis was much more of a businessman than he was a craftsman — in fact, he wrote numerous books about advertising and sales — and he never harbored any illusions about his films’ artistic quality. He was self-effacing in interviews and commentary tracks. Maniacs! is about as fancy as Lewis ever got, and it still features clunky dialogue, unconvincing effects, wonky dubbing, and exactly two kinds of acting: wild over-emoting and comatose blankness. Midsommar, on the other hand, is clearly the work of an artisan director who puts the utmost care and attention into every frame. Who would ever think to compare it to Lewis’ drive-in trash?

Nevertheless, as I watched Midsommar play out in all its fastidious glory, my mind kept wandering back to Pleasant Valley. Just like Two Thousand Maniacs!, Midsommar is a shockingly bright, colorful movie in which most of the violence occurs during the sunniest hours of the day with pleasant scenery all around. It’s a deliberate departure from the usual gray, shadowy look of most horror films. Both Aster and Lewis seem to understand that ritualistic carnage is even more shocking when in occurs in a bucolic setting.

More importantly, though, these are both movies about mass hysteria, about places where utter insanity is so common that it’s the default local mindset. In the trailer for Two Thousand Maniacs!, an announcer describes the festivities in Pleasant Valley: “What they were celebrating wasn’t important, and it sounded like a heap of fun until 2,000 maniacs, crazed for carnage, started bathing an entire town in pulsing human blood. You’ll see six young strangers doomed to slaughter by an ancient curse.”

That basically sounds like what happens in Midsommar, too. In that film, the members of a remote Swedish commune called the Hårga are celebrating a strange, violent ritual that happens every 93 years (nearly a centennial), and they need tourists — six in all — to make it happen. A friendly-seeming Swede named Pelle (Vilhelm Blomgren) is tasked with rounding up some unsuspecting outsiders. So he serves the function of Rufus and Lester in Two Thousand Maniacs! In both films, the visitors are initially given the royal treatment but soon start to suspect that something is up. Which it is.

I noticed further plot similarities. In Midsommar, scholarly Josh (William Jackson Harper) sneaks around the commune at night, trying to find out more about the Swedish cult. He unwisely photographs some kind of sacred book. This is analogous to the scenes in Maniacs! in which Terry and Tom do some late night detective work in Pleasant Valley and discover a tell-tale plaque that describes the 1865 massacre of the town’s residents.

The central conflict in Midsommar exists between grieving protagonist Dani (Florence Pugh) and her insensitive boyfriend Christian (Jack Reynor). Dani and Christian are already having severe relationship problems, and their trip to Sweden only exacerbates the situation. Likewise, in Two Thousand Maniacs!, we have the aforementioned Johnny and his brassy blonde wife Bea (Shelby Livingston). These two bicker constantly, and it’s implied that Johnny has little interest in staying faithful to his better half. Eventually, it’s infidelity that proves to be the undoing of both Johnny and Christian, with Johnny seduced by the curvaceous Betsy (Linda Cochran) and Christian lured into impregnating a cultist named Maja (Isabelle Grill). It’s interesting how, in both Lewis’ film and Aster’s, the crafty locals repeatedly use sex to lure the victims into various traps.

Another odd coincidence is how the children of both Pleasant Valley and the Hårga mimic the violent ways of their elders in their own naive fashion. In Two Thousand Maniacs!, the first onscreen fatality is a cat lynched by pugnacious brat Billy (Vincent Santo) and his young peers. In Midsommar, meanwhile, the children of the commune play an unsettling game called “skin the fool.” It’s not as awful as it sounds, but the name is still cause for alarm.

One significant difference between Two Thousand Maniacs! and Midsommar is that only tourists are murdered in the former, while both tourists and locals die in the latter. But even here, there are parallels. One of the most shocking scenes in Midsommar occurs when two elderly cultists leap from a cliff to their deaths. This matches the infamous scene in Maniacs! in which Beverly (Yvonne Gilbert) is crushed by a boulder that falls from a dunk-tank-like contraption. In both scenes, we have the same feeling of dreadful suspense, followed by a big fall and an even bigger splatter involving large rocks.

I’m not saying that Ari Aster has seen or even heard of Two Thousand Maniacs! I’m certainly not suggesting he used it as a blueprint. But I’m fascinated by how he and Herschell Gordon Lewis arrived at very similar conclusions in very different settings. I suppose, ultimately, these two films highlight the ugly side of human nature and the dangers of groupthink. Maybe they’re both descendants of Shirley Jackson’s 1948 short story, “The Lottery.” The public stoning in that tale actually looks tame compared to what Lewis and Aster depict. Then again, the lottery happens every year rather than every 93 or 100 years.