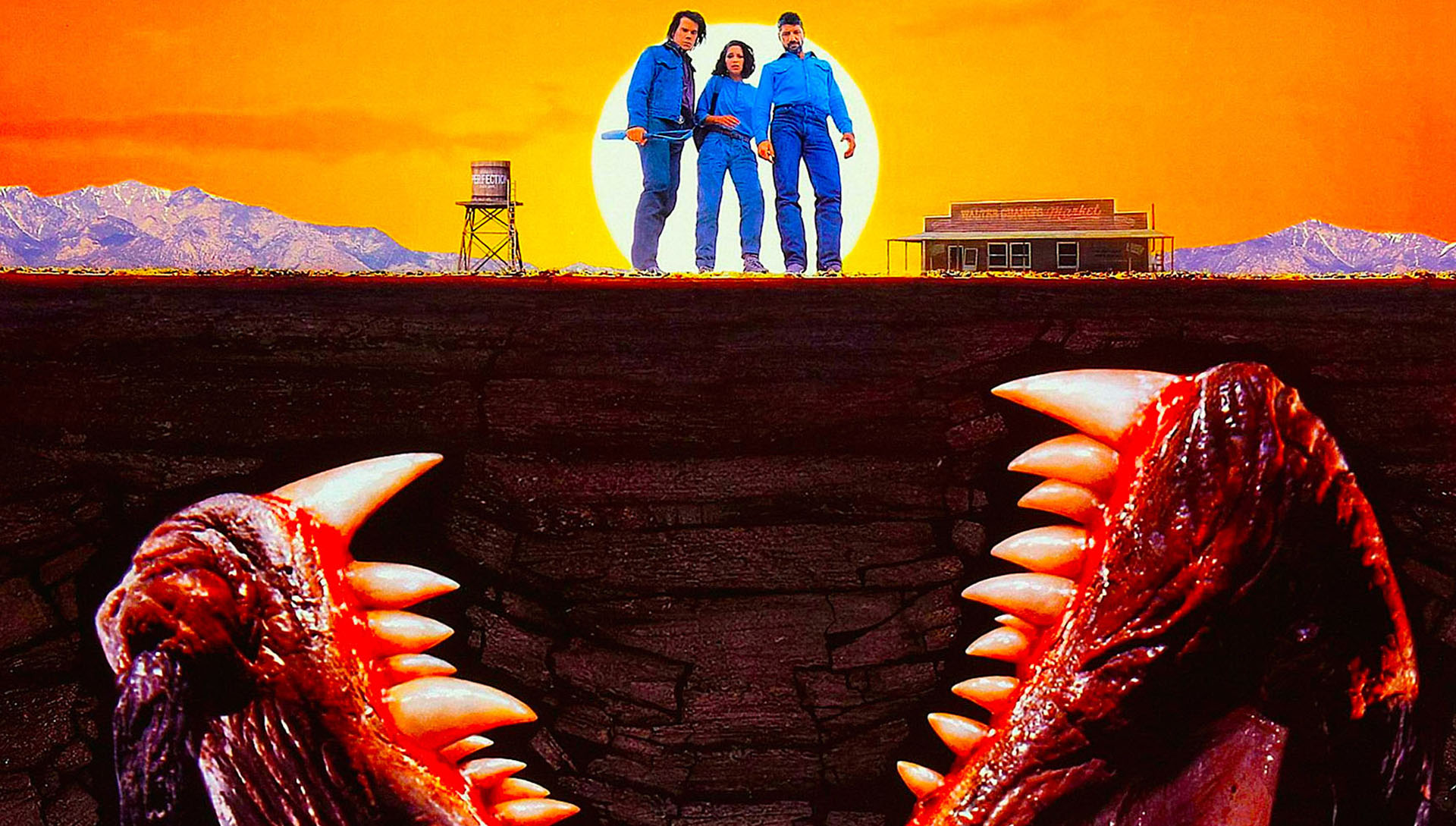 Earlier this week we got a first look at the trailer for the FIFTH movie in the Tremors franchise, Tremors 5: Bloodlines. It’s been a few years since I really thought about these movies, but watching the trailer made my mind drift back to the year 1990, and I spent some time pondering a low budget monster movie that is generally loved by all.

Tremors was officially the first mildly “adult” movie I watched in a cinema. I’d been raised on a healthy diet of films like The Terminator and Aliens since I was old enough to walk, but unlike America the UK had (and still has) very strict restrictions when it comes to gaining access to that magical big screen. I was 14 at the time, and Tremors had been awarded a “15” certificate, but when I nervously approached the stern-faced woman at the ticket desk she only stared at me for a fraction of a second before taking my money and I was IN!

It was a movie experience I’ll never forget, and in the years since that excitement filled afternoon I’ve come to realize that most people react VERY positively when you mention the word “Tremors” to them. So what did this little movie do right? And why has it stood the test of time so well?

The answer to that is simple, but it’s something SO many similar movies fail to understand and fail to strive for these days – a good script, and good actors giving life to the words on the page.

Tremors REALLY nailed just about every character choice it made, and in doing so the makers ensured you got to follow likeable, funny and enjoyable personalities through the crazy adventure that unfolded. I talk about the need to feel a connection with the actors on-screen a LOT when I write reviews, but to me it really is everything. From the biggest mega-budget blockbusters, to the smallest creature features – solid writing with the right casting is the foundation you build upon, and when that foundation is strong you can start having some fun and watch the magic happen.

Tremors has a lot of comedy running through it, and the tone of the movie could have been potentially challenging for many performers, but director Ron Underwood (working on his first feature length film), had some effortless talent at his disposal, and it’s through them that the quality contained within Tremors starts to flow, working its way outwards across the whole production.

Fred Ward brings an instantly lovable maturity to the role of Earl Basset, an easy-going handyman who dreams of moving to a bigger town with more opportunities. He’s cool, resourceful and wise, but still has an excitable and energetic streak running through him that makes the character a joy to watch. Ward is a very skilled actor, and has proved over the years that he can switch from serious roles to balls-out comedy with ease. He has presence, and always commits to a part.

Matching that commitment was Kevin Bacon, playing the other half of our reluctantly heroic handyman team, Valentine “Val” McKee. Bacon is on FIRE throughout Tremors, displaying perfect comedy timing with relentless energy and enthusiasm. His acting career was in a bit of a slump during the late 80s, after a very promising start to the decade, and if you scan through his IMDb page you can see a clear change in fortunes after Tremors was released. Maybe it was pure coincidence, but it wouldn’t surprise me one bit if this movie did make a genuine difference to his career path. He was awesome, and I say that as someone who normally isn’t very keen on him as an actor.

Ward and Bacon illuminate every scene they appear in, but Tremors isn’t happy to just rely on them to carry the story. The guys have some serious competition for the title of ‘Most enjoyable characters in the movie’, and of course I’m referring to Burt Gummer and his wife Heather, played by Michael Gross and Reba McEntire. 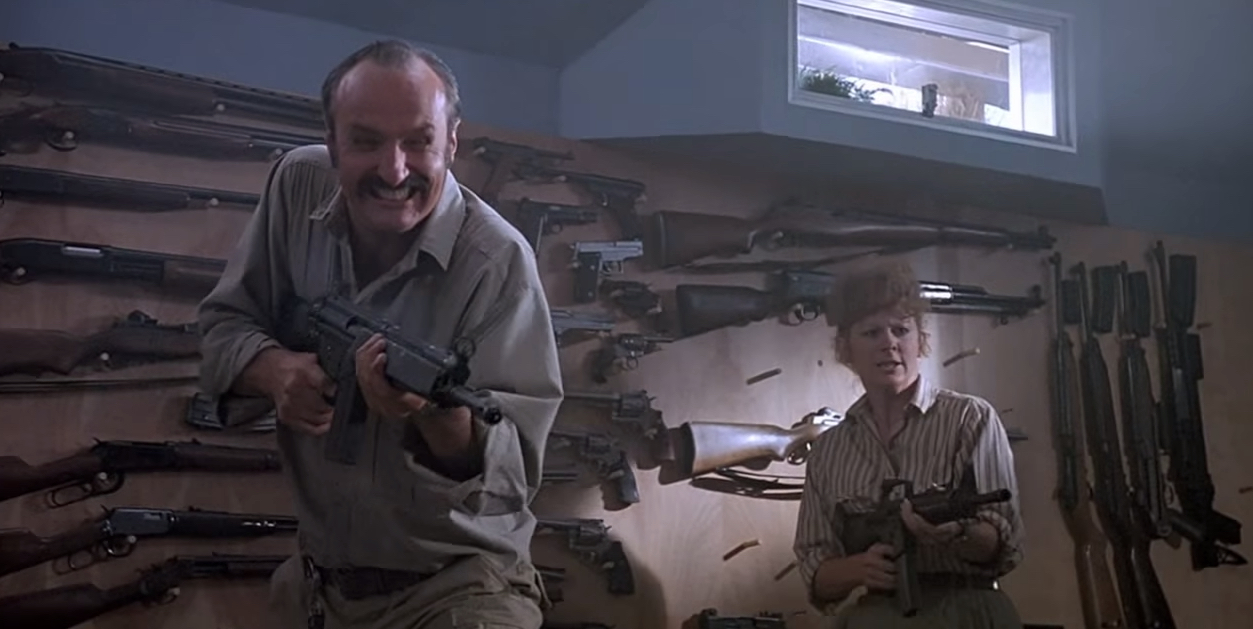 Burt and Heather are intelligent, quick thinking and useful to have around in a crisis situation. They are also ever so slightly unhinged survivalists, who own more guns than a Mexican drug cartel and know how to use them! Some brilliantly deadpan comedy moments are created when the Gummer’s are called into action, and the easily irritated and paranoid Burt arguably steals the whole damn show. Michael Gross would go on to become the face and star of the franchise as it stumbled onward from one disappointing sequel to the next, but when you rewatch the original movie you are instantly reminded why this character was embraced, and why he’s still popular 25 years later!

Finn Carter completes the main cast playing Rhonda LeBeck, a young student seismologist who provides some much needed intelligent exposition to the easily confused Val and Earl. It was probably too much to ask that she not be used in a romantic way, but it has to be said that the mutual attraction that develops between her and Val is pleasingly subtle, and never intrudes in a way that feels forced.

All five are different, all five have unique character traits, and all five of them grow and develop across the relatively short running time. They make you smile, they make you feel concern, and they make you CARE!!

The biggest compliment I can give to Tremors is that it still remains one of my all-time favorite monster movies, but it contains monsters that just don’t excite me and are honestly a bit dull … which simply doesn’t matter!

The “Graboids” serve their purpose, look good thanks to some awesome practical effects, and the way they stalk and attack unsuspecting victims is unnerving enough to make the danger legitimate. They do what is necessary below, while the real quality goes to work above ground.

Tremors feels a bit like a goodbye to a golden era. A time when movies had to entertain you and engage you without the limitless possibilities that CGI can provide. Even though it came out in 1990 it was made a year before and has the scent of the 1980s all over it. It’s my favorite smell in the world, because it normally means characters FIRST, monsters second.

Like Ghostbusters, Gremlins, Jaws and many others from that time, Tremors had to walk a fine line, but maintained perfect balance all the way across. Horror, comedy, scares and laughs all gliding around each other in perfect formation and never colliding.

It’s a wonderful thing to watch when it happens, and even at 14 years of age I knew that this crazy movie about giant killer worms would be something I’d always remember and love.

The town in the movie is called Perfection, and they weren’t far from it!