The muggy air wrapped around him in a tightly-knit blanket, warm and moist from his breath and sweat that lingered and trickled down his face and neck. Red burns had been dragged across his shoulders and back, and briefly dotted his cheeks. His eyes constantly blinked moisture away as he worked.

A fan hummed over the soft sound of Video Killed the Radio Star in the background, and flies encircled plates of food and other matter that lay in piles about the room. The window was open, but did little to quell the air, clouded with steam and heat.

Sweat weaved in between the hair on his arms, dancing and darting down toward other liquids that trickled and beaded on his skin and in his pores. He took in a breath; cloudy air drew into his lungs and coated his throat. He released a breath; a grunt, a swing, and more of the ghastly liquid spattered on his face.

In my mind and in my car… Another swing. The sound of an axe hitting bone hit his ears even harder. It thunked above the cool hum of the fan and the radio that groggily played away beneath it. His foot tapped to the rhythm, but its excitement died almost as quickly as it had begun. A forearm pulled across his forehead, leaving behind a red smear among the washed sweat. 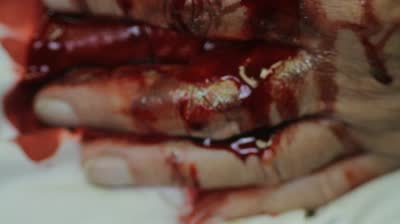 Pictures came and broke your heart… A sob broke between grunts and axe swings, sputtering red and white bubbles from between two thick, cracked lips. Another hand dashed across his face. Another axe swing followed the prior. The bone snapped.

Swing after swing, cleave and crush and smash, he stared down at the bloodied pile, and in turn it stared back at him. The ghost of his son, alert and running, lingered in his mind.

You were the first one.

Another sob broke through.

You were the last one.