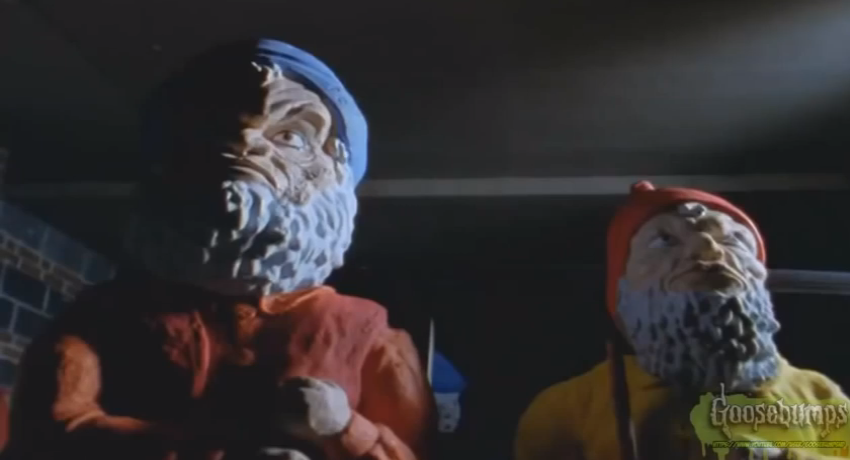 Horror films and spooky adventures have played a pivotal role in my life for as long as I can remember. I love seeing the look on people’s faces when I tell them about watching Stephen King’s ‘IT’ at only four years old, and my home has become a proverbial shrine to all things scary. I laugh in the face of zombies, I’m unaffected by even the creepiest of clowns, and the dark is a sanctuary where I thrive. I’ve written for numerous publications about rape revenge and exploitation films, and I’m a person that watched the entire Saw series in one sitting, but there’s one thing that I’ve never been able to shake…

If you ask anyone that knows me in real life, they’ll probably have at least one story of my breath quickening in the garden section of a Home Depot, or my erratic walking pattern throughout the store once supermarkets start putting their lawn ornaments on display for the Spring. It’s an uncontrollable terror that overcomes me and no matter how hard I try, I can’t make it stop. I get teased about it constantly, and with good reason. I am fully aware of how stupid it is to be afraid of an inanimate object, but there is nothing on this planet that scares me more than lawn gnomes.

And this phobia is deeply rooted within an old episode of the Goosebumps television show.

Every day after school, I would hurry home to finish my homework before planting myself in front of the TV to catch episodes of Goosebumps. I consumed this show the way most kids devoured Happy Meals, and never once did I have a nightmare. That is, until “Revenge of the Lawn Gnomes” popped up on the screen.

Like most Goosebumps episodes, “Revenge of the Lawn Gnomes” is a cautionary tale about being a truthful person, but showcased two lawn gnomes that come to life and cause mischief. The gnomes start off simple enough by destroying the mean old neighbor’s lawn, but then they soon grow more vengeful and malicious. Goosebumps episodes loved to dress up little people actors in costumes and have them run amok, but there was something about watching these lawn gnomes turn from stone statues to moving creatures with sharpened fang teeth that stuck with me. This is an episode that didn’t have a happy ending, and instead ended on the note that the gnomes were going to get us all.

Shortly after watching this episode, my father (a man who LIVES to scare people) thought it would be funny to convince me that the garden gnomes my next-door neighbor proudly displayed were going to come to life and turn me to stone. This, combined with a childhood friend that thought it would be funny to hide a lawn gnome in my bedroom was a recipe for disaster. To this day I’ve avoided the “Revenge of the Lawn Gnomes” episode upon Goosebumps rewatches and I’ve yet to see the new Goosebumps movie because the presence of the lawn gnomes in the trailer was enough to revert me back to being a horrified six year old girl.

Hopped up on cold medicine and freshly off of a joyful high from watching Tales of Halloween and Deathgasm, I stumbled across the Goosebumps television show on Netflix. After hearing about my colleagues enjoyed the feature film adaptation of Goosebumps, I realized that I had some fears to overcome, and this was my moment to finally bite the bullet and revisit the creatures that caused me so many nightmares over the years.

The anticipation while watching the opening credits was almost too much to handle. Had someone been sitting next to me, I’m sure they could have heard my heart beating out of my chest. I’m fully aware of how insane it must sound to hear a grown woman speak of horror in regard to a child’s television show, but this experience, I can assure you, was very real.

Joe Burton’s dad (Peter Keleghan aka Mr. Wayne from Ginger Snaps) brings home the lawn gnomes and keeps them hidden under a tarp in the flatbed of his truck. I could see their silhouettes peaking under the fabric, their pointed hats pushing toward the sky. I think this is the moment where I began to bite my lip to the point of drawing blood. Once he revealed the gnomes, I began to breathe a little easier. I had completely forgotten how ridiculous the gnome design is. It’s clearly two little people dressed in a costume (which is problematic enough on its own, but that’s an entirely different argument) and they’re clearly wearing children’s raincoats. Their faces hold a displeased expression, but these gnomes were so much larger than I remembered as a child. My realization that they were much too tall to be normal garden gnomes helped put me at ease. That is, until they transformed.

My boyfriend was in the room at this point, so I didn’t want to scream out loud, but I could hear my heart beating in my ears. “Are you okay? You look visibly disturbed.” My boyfriend has always been an observant one, and my attempt at hiding my fear was going terribly.

Once they showed their teeth, I immediately turned into a six year old all over again. I was instantly flooded with the memories of finding a lawn gnome in my bed and the way my neighbors gnomes looked nestled between her rose bushes. Between a heart beating faster and breaths getting shorter, I managed to finish the episode unharmed. Sort of. I had finally watched something I had been avoiding for over fourteen years, and I now feel a little more comfortable watching the new Goosebumps film without going into cardiac arrest. Screw beating cancer (which I did). If I can make it through “Revenge of the Lawn Gnomes,” I can make it through anything. Will I make it through the new movie?

I guess there’s only one way to find out.