He’s one of the best writers in the digital realm and I’m constantly thrilled to be working alongside him here at Halloween Love – I am of course talking about Mr John Squires.

A few days ago John participated in a fun horror movie Q&A that’s been floating around online, and part of the process was to challenge some more individuals to take part. My name came up so here I am with my answers!

Every now and then I create an article called “Your Choice” where readers try to put together a list of their 10 favorite horror movies of all time and I’ve often been told how difficult it can be. Answering the questions below has given me an insight into this, and I have to admit I better understand what they mean now. This was a lot of fun but tough! A few weeks from now I’ll probably have different answers for most of them but at this moment in time I’m satisfied. Here we go …

1. What was the first horror movie you remember watching?

The STRONGEST and most distant memory I have of watching a horror movie, sadly features a film that is, shall we say, less than impressive. Yes boys and girls – I was sat at home on a hot summer afternoon watching Zoltan: Hound Of Dracula! I was probably about 6 or 7 years old and had been ill for a day or two, so afternoon sessions curled up on the sofa with a blanket were in full effect. I was eating a large bowl of strawberry sundae desert that one of my parents had purchased from the local ice cream van and I just vividly remember being VERY happy.

It was a terrible movie but it contained a lot of classic and cheesy horror imagery that stayed with me: Vampires sleeping in coffins, Dracula wearing a red velvet lined cloak and a medallion – stuff like that. It was a gentle push down the horror loving road, and I’ll never forget it.

I also remember being exposed to The Shining a lot in my early days as well, but that was just snippets here and there. My dad was very open minded and relaxed about what we could watch, but he had his limits – and apparently Nicholson going insane with an axe was one of them!

2. What is your favorite horror movie?

It’s horror on a different level. Every shot is beautiful to look at, every scene and line of dialogue serves a purpose, and it just makes you feel uneasy and creeped out from start to finish. If the world was about to end and I only had time to watch one horror movie before the apocalypse arrived, it would be Kubrick’s masterpiece that I would reach for.

3. What is your favorite horror movie sub-genre?

Psychological horror. When it’s written well and directed with a skilled eye there is nothing quite like it, and there is always room to throw in plenty of good old fashioned gore and slasher set-pieces – with Silence Of The Lambs and The Shining being perfect examples. Session 9 and Angel Heart are also examples that have seriously impressed me in the past. When John answered this question he mentioned liking films that can blend sub-genres together, and I’m very much in that camp as well. I never target specific sub-genres and love all horror, but psychological is the answer to this question.

4. What horror sub-genre scares you the most?

I suppose supernatural horror. In the last ten to fifteen years it’s been Japanese/Asian horror movies that have creeped me out the most, and they tend to feature ghosts and cursed evil spirits more than anything else. It’s just the way they do it – slow build up, tension building silences, confusing imagery, it’s very effective and different. But in general I’m hard to PROPERLY scare these days.

5. What is the last horror movie that actually scared you?

Parts of The Babadook unnerved me. Every time Amelia is in bed and she hears movement approaching down the hallway – DAMN!! I’d have that door barricaded with a wardrobe and the bed faster than you can say “FUCK THIS” …

But to find the last time a horror movie scared the crap out of me from start to finish and left me a sweating mess – you have to go back to 2001, when I watched Ringu for the very first time, alone and with no prior knowledge of what it was about or what would happen. People used to joke about wanting to turn their TV to face the wall after experiencing that and I can honestly say I considered it.

6. Who is your ultimate scream queen?

Has to be Jamie Lee. I love Neve Campbell in every Scream movie and I believe she was the glue that held the series together, but when I think “scream queen” I think Jamie Lee Curtis. 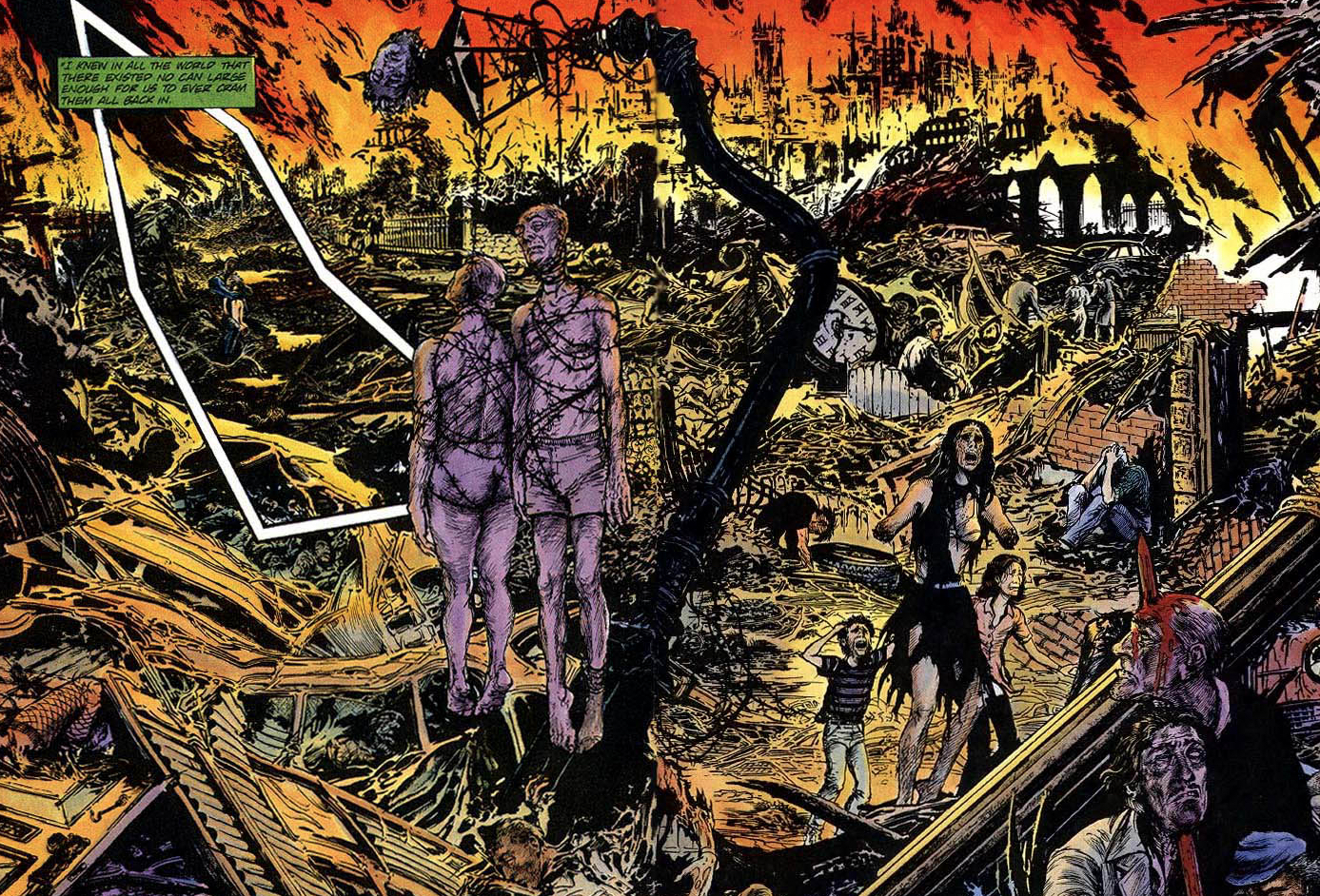 7. What is a concept that you would like to see in a horror movie?

Super-powered beings going insane and doing untold damage to the earth and the human race! Absolute power in the hands of pure evil. This idea was born after reading Alan Moore’s Miracleman comic book run, especially the horrific events contained within issue 15!

It basically featured an evil superhuman character (Kid Miracleman) going completely off the rails and turning London into hell on earth. Mothers and their children were mutilated and blinded, naked bodies were hung from lamp posts wrapped in barbed wire. The entire city was destroyed and burning – It’s the Avengers meets Hellraiser.

If it was written and directed in a very dark and serious way by talented people – yeah, I’d like to see something like that.

8. What is your favorite onscreen kill?

Oh boy, possibly Drew Barrymore kicking off the Scream franchise and giving the entire genre a much needed boost. That whole opening scene is directed to perfection and when her death is finally confirmed it’s truly brutal and gory. But there are just SO many to choose from, my answer to this could be different from one day to the next depending on my mood. Almost impossible to pin one down permanently.

9. What is your favorite horror franchise?

It’s the franchise I encountered and embraced first in my youth, and It’s the franchise that made me think horror was awesome and made me utterly obsessed by these iconic masked and disfigured killers. Plus, when you are a kid, Jason is just SUCH a cool creation – with the smooth white mask concealing a monster underneath. There are BETTER franchises out there, but Friday The 13th will always be my favorite.

10. Who is your favorite horror director?

It’s tempting to say Wes Craven, but the name that entered my head first is John Carpenter. Halloween and The Thing are just insanely perfect movies, Backed up by some of my other eternal favorites such as The Fog and Prince Of Darkness – he is my choice in my heart AND my head. Craven is a genius and probably a superior “ideas” guy, but Carpenter is the king in my humble opinion.