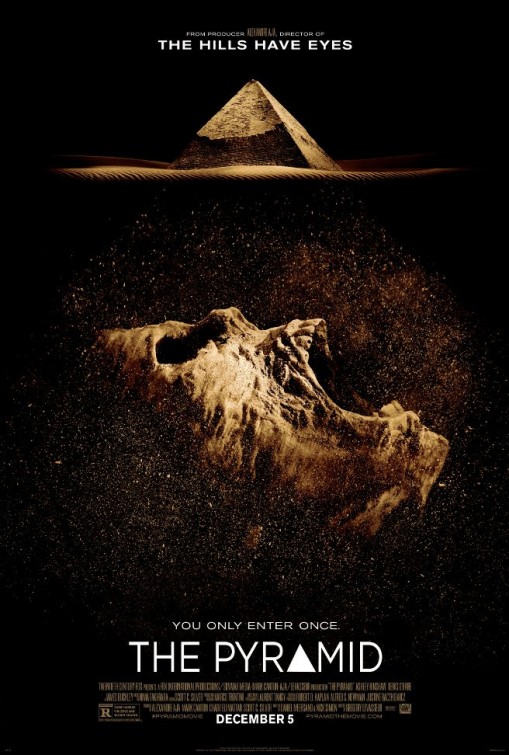 Last year’s The Pyramid has the unfortunate honor of being the rare Hollywood found footage movie that didn’t at least make back its miniscule budget at the box office, and that failure must be partially blamed on the fact that it was released into less than 600 theaters. After a dismal theatrical run, The Pyramid is now available on home video, offering all the chance to step inside.

Produced by Alexandre Aja and directed by frequent collaborator Gregory Levasseur, The Pyramid centers on an archaeological dig that uncovers an ancient pyramid buried deep underneath the Egyptian desert. Dr. Miles Holden and his daughter Nora enter the pyramid against their better judgment, joined by a documentary crew. Once inside, they quickly find that they’re not alone.

The Pyramid is typically classified as a found footage film, and though I called it one up in that first paragraph, the truth is that it only partially belongs in that sub-genre. Levasseur utilizes the cameras of his characters only when he needs to, alternating between a traditional filmmaking style and the shaky cam gimmickry that many fans have come to loathe over the years.

It’s an interesting approach to the proceedings, reminding that a filmmaker need not be tethered to a gimmick. And while one could argue that Levasseur wanted to have his cake and eat it too, and kind of cheated by disregarding the confines of the found footage style, it’s nevertheless nice to see a film of this sort that doesn’t really bother to play by the rules – by design, rather than by mistake.

Regardless, The Pyramid very much feels like a found footage film, to the point that it may be a while before many viewers even realize that what they’re watching isn’t being filmed by one of the characters. In other words, many of the sub-genre’s nauseating tropes are very much present throughout, and the film also suffers from many of the issues inherent to that type of movie.

For one, the characters are underwritten and poorly acted almost across the board, coming off as one of the most unconvincing groups of archaeological experts you’ll ever meet. Ashley Hinshaw is particularly dull as main character Nora, and though her dad is played by the supremely talented Denis O’Hare, the script doesn’t give him much of a chance to show his stuff. And that, my friends, is a bummer.

I always say that it’s hard to care about any horror movie that’s filled with characters you don’t care about, and though that’s very much the case with The Pyramid, the good news is that this one has got other things working in its favor. For one, it’s the rare movie of this sort with the balls to have an R rating, and its lack of restraint when it comes to killing off characters in gruesome ways is to be admired.

And then there’s the location, which in and of itself separates this one from the pack. The majority of the film takes place inside the titular Pyramid and it’s a fun setting to play around in, full of things like sand traps, spike pits and secret doors. Sure, other recent horror films have been set underground, but the pyramid locale gives the movie a certain personality and a thrilling sense of adventure.

So, what’s the threat that resides within The Pyramid? Well, there’s more than just one. Aside from the dangerous terrain, as well as some sort of airborne infection, nasty little cat creatures roam the premises, and just wait until you meet the big guy. It’s not quite a mummy movie, as I went in expecting, but those who are interested in Egyptian mythology will be pleased by the film’s various threats.

There’s admittedly a lot to rag on when it comes to The Pyramid, from the borderline laughable computer-generated monsters to the cookie cutter characters, and the shoddy acting to the indecisive filmmaking style, but in the end it’s enough fun that none of that stuff really matters. Because sometimes, all a horror movie needs to be is a silly slice of entertainment.

The Pyramid is just that, and I’m totally okay with it being nothing more. In that sense, it’s almost a throwback to a simpler time for the genre – a time wherein we didn’t take horror movies so seriously, and simply asked for them to be fun. If you can put yourself back into that childlike headspace, I think you’ll find that the secrets this pyramid holds are worth uncovering.

Double feature this one with As Above, So Below, if you ever find yourself with the time. In my eyes, that’s a damn fine way to spend a night.