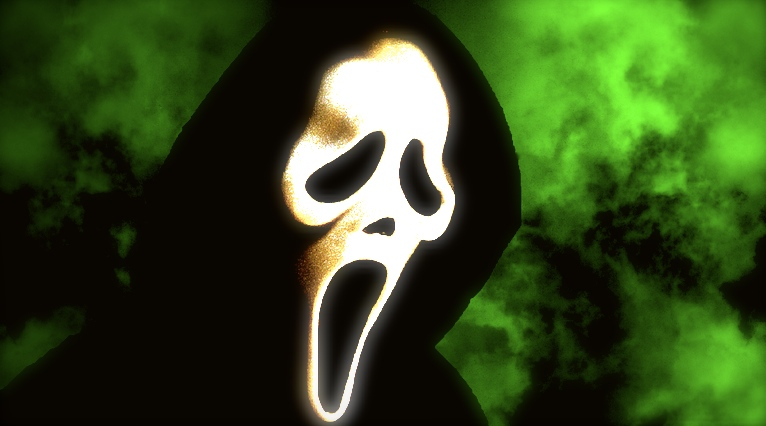 No matter what you think of the Scream movies, love, hate, indifference – there is one aspect that is hard not to seriously like, and that is of course Ghostface, the most energetic and clumsy of all the horror movie icons.

Freddy likes to prowl and pose, the master of his dream realm. Michael Myers moves with almost silent power and purpose. Jason walks with hate-filled tunnel vision – but Scream has a killer who runs, jumps, sprints, trips, dives and stumbles. It’s all very human. At times it can be almost comical, but then you start to imagine what it would be like to have this masked, knife-wielding tornado hot on your heels and amusement turns to terror.

When you were young did you ever experience that fun but panic-filled feeling of dread as your friends were chasing you? When you are running as fast as you can but you sense the other person is still very close behind you and all your efforts aren’t making much of a difference. I hated that sensation, so the normally brief but intense chase moments in Scream movies really do creep me out.

Visually he is a wonderful creation, and Wes Craven wisely decided that no matter who was under the mask (man or woman), Ghostface would always physically move and react in the same way, meaning you got a familiar character to enjoy from movie to movie before the inevitable revelations would arrive.

It’s a costume designed to terrify the victims in their final moments and it just looks awesome!

So join me now as I select my ten favorite Ghostface ‘moments’ across all four movies. Scream is at its best when this playful killer is stalking his victims and having some fun!

Sarah (Jenny McCarthy), unwisely decides it would be a good idea to hide in a storeroom FULL of Ghostface costumes. Is the actual killer in the room? Of course he fucking is!

Arguably the most brutal kill in the entire franchise. Olivia (Marielle Jaffe), discovers far too late that Ghostface has been patiently sitting in her closet waiting for JUST the right moment to emerge for maximum effect. Being in the dark for so long must have put him in a foul mood because he REALLY makes a mess here …

Fonzie aka Principal Arthur Himbry (Henry Winkler), has some fun with a Ghostface mask he has confiscated from a student just before the real thing shows up in his office and introduces him to the end of a knife. Not so cool now!

Randy (Jamie Kennedy), gives Ghostface a brilliant verbal slapping just before being pulled into a news van and getting stabbed more times than I care to mention. Randy knew the rules, but apparently watching your back isn’t one of them.

Cotton Weary (Liev Schreiber), reaches the end of the line after surviving the first two movies. Ghostface even manages to manipulate Cotton and his girlfriend into having a physical confrontation with each other – before killing them both!

Maureen (Jada Pinkett Smith), gets sliced and diced in front of a movie theatre full of mask wearing ‘Stab’ fans. An epic opening to the impressive 1997 sequel (Has it really been that long??).

The first face-to-mask encounter between Sidney (Neve Campbell), and Ghostface, the killer who will make her life a misery over the next four movies.

Cici (Sarah Michelle Geller), suffers a textbook Ghostface death that includes: Spooky phone calls, strange noises, lots of running and screaming and finally knife injuries. Oh, and he throws her from a balcony just to make sure. I expected more from Buffy to be honest …

Who needs a knife? Tatum (Rose McGowan), discovers that pet flaps can be unreliable escape routes, allowing Ghostface to casually flip a switch and watch the poor girl thrash around until her inevitable skull crushing demise. AND she wasted beer – not good.

The kill that started it all and set the tone for the entire franchise. Casey (Drew Barrymore), has to endure the ultimate horror movie set piece and ends up gutted and hanging from a tree! The whole scene was tense, shocking, brutal, and most importantly – it built up the terror slowly and carefully, never rushing. The end result is one of the finest moments in modern horror movie history.