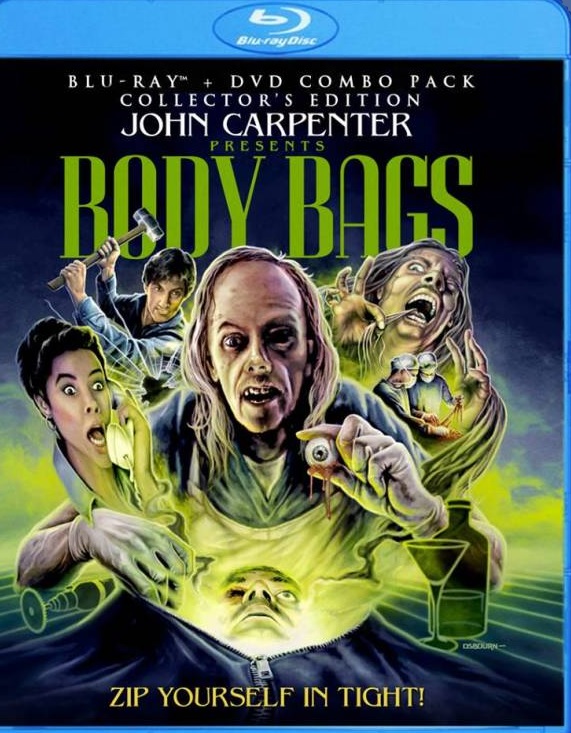 The year was 1993. With HBO knocking the horror anthology format straight out of the park with their EC Comics-based series Tales from the Crypt, competing network Showtime wanted their slice of the proverbial pie. And so they developed Body Bags, originally intended to be a television series that would deliver weekly tales of horror.

Showtime found their Crypt Keeper in John Carpenter, who was to present each story as a man known only as ‘The Coroner.’ Cracking wise and goofing around in the county morgue, Carpenter’s starring role allowed him to show off his acting chops, and he was also set to direct a handful of episodes – bringing in horror pals to tackle their own tales.

Unfortunately, this early iteration of Showtime’s Masters of Horror simply wasn’t meant to be. The network pulled the plug on the series after just three episodes were filmed, and instead turned the footage into a same-named TV movie. Body Bags premiered on August 8th, 1993, the standalone episodes cobbled together to form an anthology film.

In this new installment of Halloween Love’s Anthology Rank, I take a closer look at each of those three segments, ranking them from least to most favorite. But before we get to that, I simply must point out the thing that makes Body Bags one of the most unique horror anthologies ever made: the fact that the wraparound segment is genuinely the most enjoyable thing about it.

My favorite thing about Body Bags is unquestionably Carpenter’s gleeful performance as The Coroner, which is the true joy of the film. Caked in makeup that makes him look, as a friend described, like a ‘white trash Beetlejuice,’ Carpenter drinks formaldehyde, plays around with dead bodies and makes jokes that would make the Crypt Keeper cringe, and it’s so much fun to watch him having, well, so much fun.

The concept of the series is quite brilliant, as Carpenter’s character prowls the morgue looking for the most mutilated bodies he can find. Once he finds just the right ones, he unzips their body bags and tells the stories of their final days, and in a fun twist at the end, we find out that the Coroner is actually one of the bodies housed in the morgue – paving way for a cameo by Tom Arnold and Tobe Hooper.

Yes, the wraparound is indeed the best thing about Body Bags, but that doesn’t mean that there isn’t a whole lot of fun to be found inside of those titular bags… 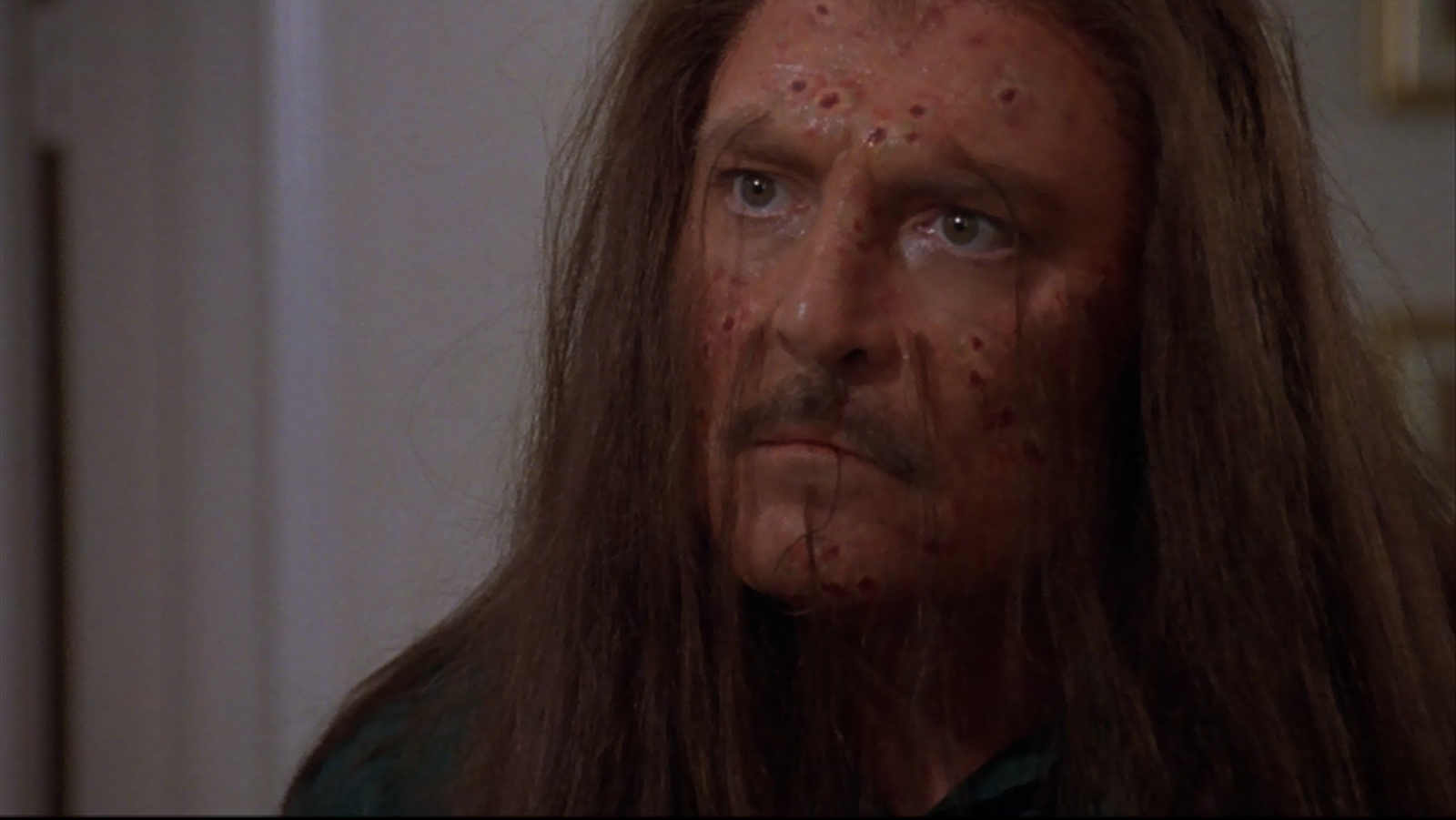 If there’s a segment in Body Bags that feels like it doesn’t quite belong it’s ‘Hair,’ which was directed by John Carpenter himself. Stacy Keach stars as a man consumed by his thinning hair, taking part in a medical experiment that promises to give him a Fabio-like mane. It works, at first, but the follicles soon develop a mind of their own.

Stacy Keach is a delight as the man who has everything but the thing he wants most, and his performance – particularly when he realizes that the operation was a success – is almost as much fun to watch as Carpenter’s. And then we’ve got iconic actor David Warner as Dr. Lock, the man who promises Keach that he can give him the hair he so desires.

‘Hair’ can in many ways be seen as somewhat of a sibling to Carpenter’s They Live, as we find out that Dr. Lock is an alien being, and the ‘hair’ is actually comprised of alien organisms that are seeding the Earth with his kind. Though things get pretty revolting in the end, thanks to charmingly outdated CG effects, the payoff to the joke feels like a case of ‘too little, too late.’

Carpenter’s second of two segments just doesn’t feel like much of a horror story, so much as it does a goofy sci-fi comedy. Which is fine, I suppose, because it allowed for him to do something different – and tell a story that he never would’ve been able to otherwise tell. It’s for precisely that reason that I can’t help but wish Body Bags became a series, and had allowed other horror directors to play around a bit. 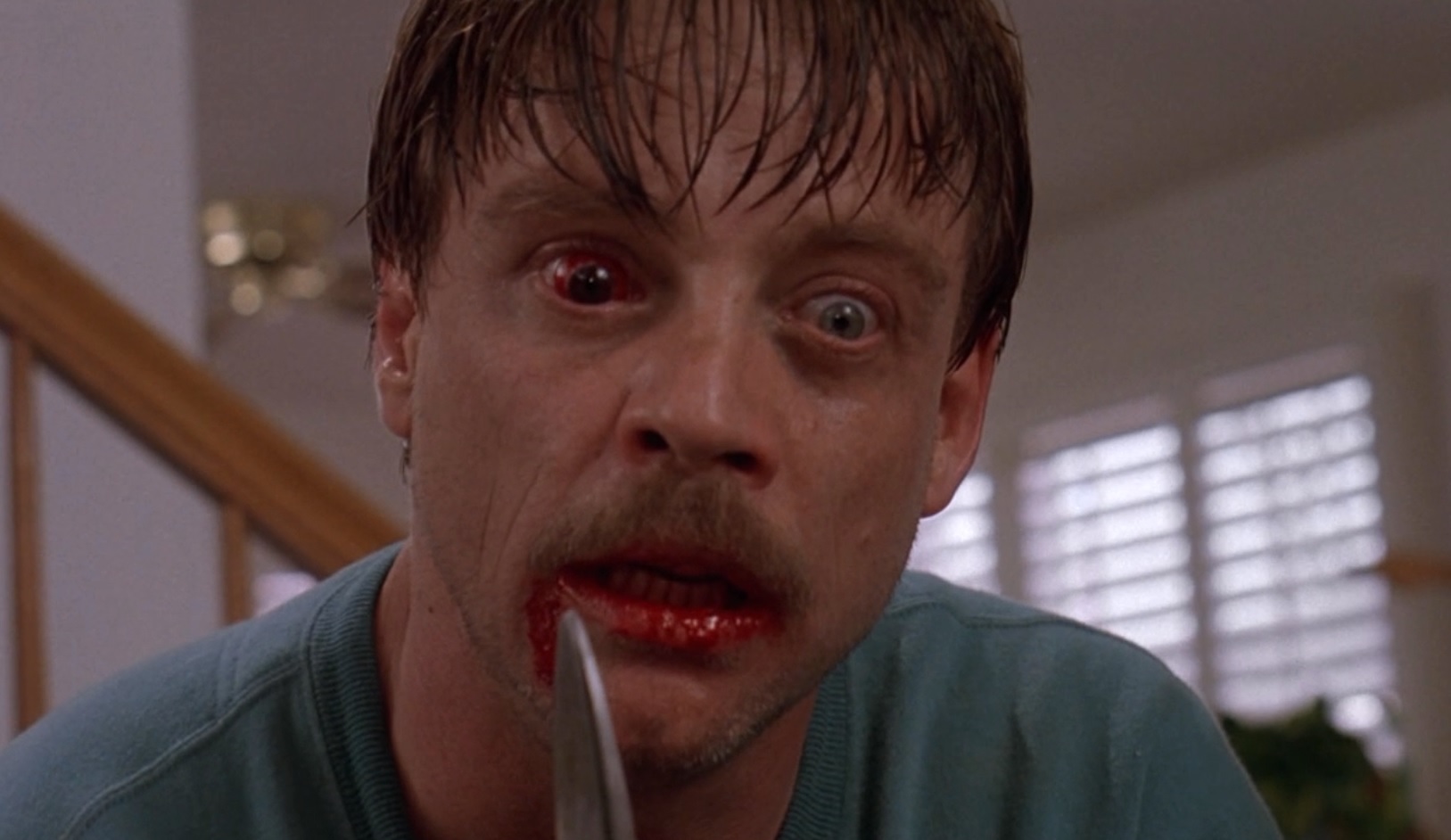 Texas Chain Saw Massacre‘s Tobe Hooper directed the third and final segment of Body Bags, in addition to popping up for the aforementioned cameo at the very end. Predating the 2002 Hong Kong film The Eye by nearly a decade, ‘Eye’ centers on a baseball player who loses his right eye and experiences disturbing visions when it’s replaced with the eye from a cadaver.

As it turns out, the donor eye belonged to a sadistic serial killer who mutilated and sexually assaulted his victims, after death, and while Brent first has visions of the victims, he soon becomes the killer – in a Jack Torrance sort of way. It’s Star Wars‘ Mark Hamill who plays the baseball player-turned-madman, and he’s so damn good at playing the bad guy.

‘Eye’ is without a doubt the most serious segment of Body Bags, and it’s also the one that has enough meat on its bones to warrant a feature-length expansion. Given Hamill’s strong and incredibly sinister performance, I can’t help but wish that ‘Eye’ was indeed a feature length Tobe Hooper film. Hooper goes to some dark places with the material, including a sex scene that I give props to Hamill for signing off on.

Oh and keep your eyes – no pun intended – peeled for a cameo by Roger Corman, who plays one of Brent’s doctors! 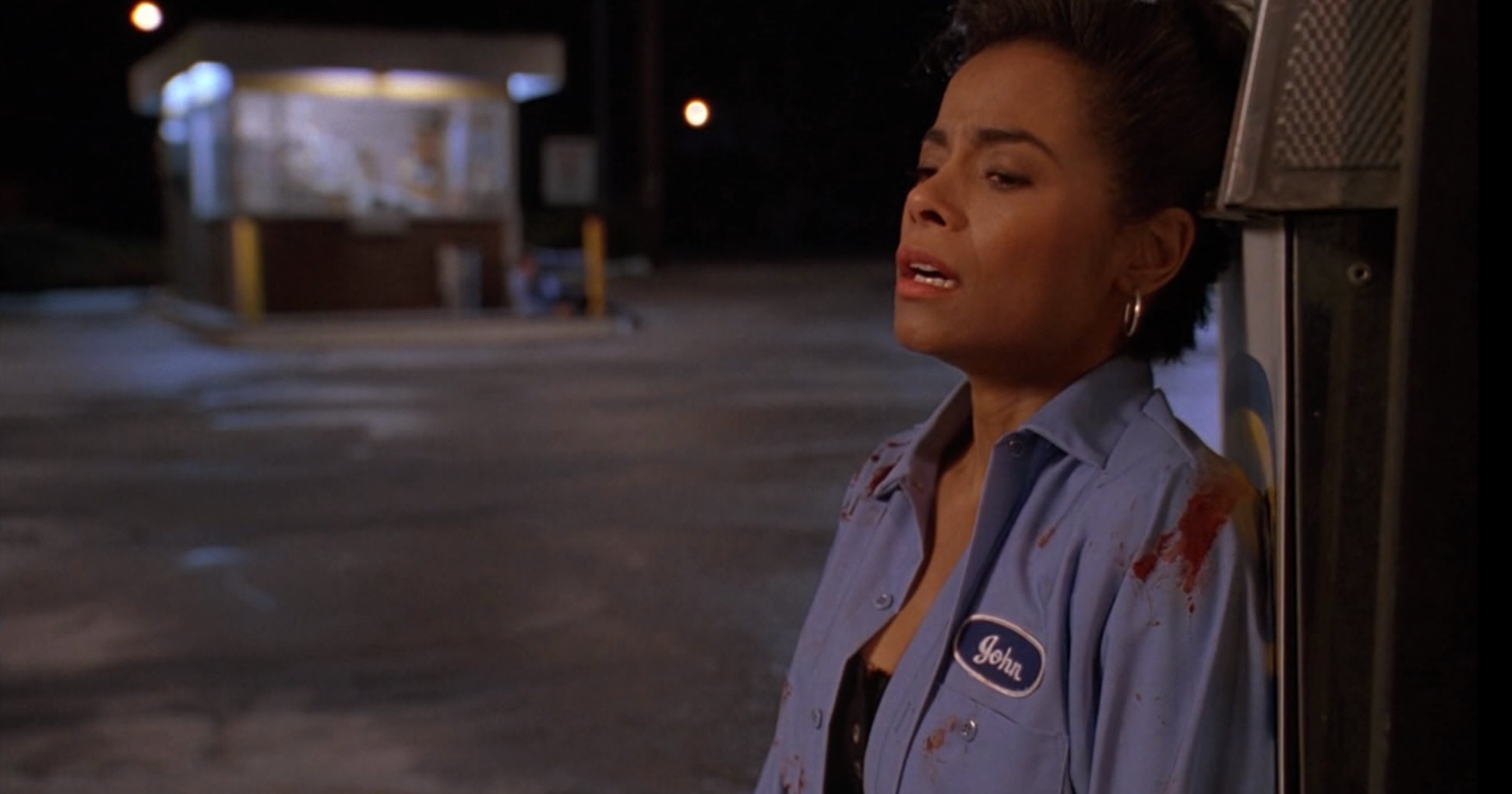 It’s the first segment of Body Bags that is my favorite, and it’s unsurprisingly the one that is universally accepted as the film’s strongest suit. If ‘Hair’ is a spiritual sibling to They Live than the Carpenter-directed ‘The Gas Station’ is definitely kin to Halloween, and out of the two segments he brought to the table, it’s the one that most feels like a Carpenter film.

Set in the fictional town of Haddonfield, Illinois – where Michael Myers resides – the story is about a young woman who takes on a new job at a gas station, spending her first night alone in the booth. With a serial killer on the loose, the woman is immediately on edge, and a string of unusual customers freaks her out even more. And then the bodies start piling up.

Oddly enough, ‘The Gas Station’ is not just the most fun segment of Body Bags but also the scariest, as Carpenter again shows that he’s got a flair for isolated horror stories. The short film is basically Halloween set at a remote gas station, and Carpenter even recreates the iconic moment where we see the villain slowly sit up in the background, unbeknownst to the ‘final girl.’

Body Bags‘ standout segment is a nice tribute to Halloween as well as a fun representation of what the series could – and should – have been. ‘The Gas Station’ includes cameos from An American Werewolf in London‘s David Naughton as well as directors Sam Raimi and Wes Craven, giving it the ‘horror dudes having fun’ vibe that seemed to be the foundation for Body Bags.

You’ll definitely find better horror anthologies than Body Bags, but there’s something special about seeing two of horror’s directorial masters letting loose and making art together. And again, even if the individual segments don’t do all that much for you, it’s worth the watch if only to see John Carpenter playing a cheap knockoff of The Crypt Keeper.

Body Bags is now available on Blu-ray from Scream Factory, and it can also be digitally rented through Amazon, in HD, for just $3.99. That’s kind of a beautiful thing, given how long the original DVD was out-of-print – and how much you previously had to pay to even see the movie. So thanks for everything you do, Scream Factory.