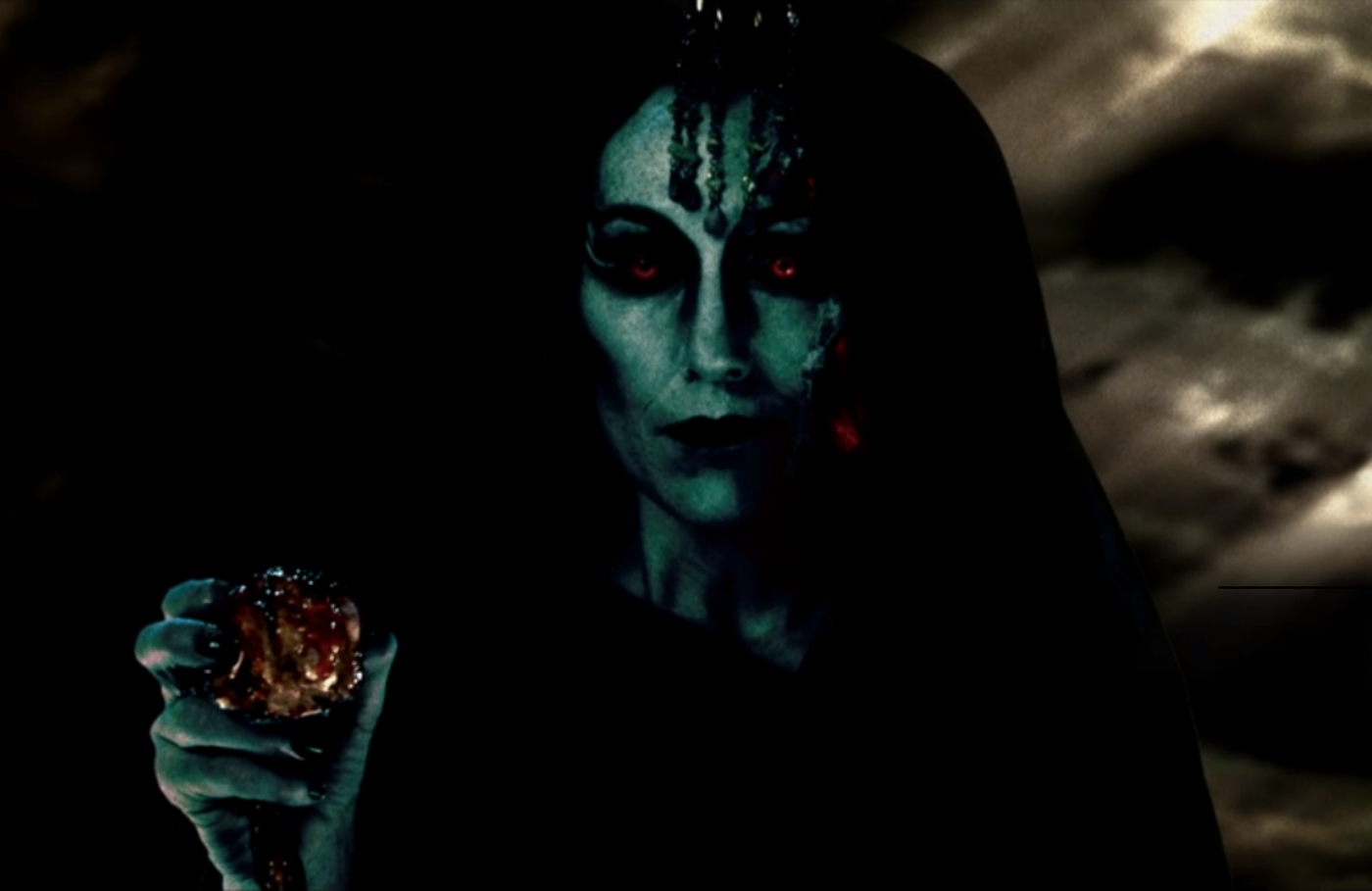 Goddamn, what is wrong with me? It’s been over a month since I posted anything to this site. I have all this free time. Shouldn’t the words just be pouring out of me by now? Well, the sad truth is that I’ve simply been out of ideas. Out of inspiration. Out of gas. I’m used up. At least that’s the way I feel right now.

So what next? Is there a way out of here? Well, what if I gave myself a fairly easy writing prompt? I have Amazon Prime, after all. What if I simply searched for the word “horror” and reviewed the first thing that came up that looked interesting, especially if I’d never heard of it before? That might get me writing again. Naturally, I’d limit myself to movies that are included with the service. I’m not paying extra for this. But if this first article works out, maybe I’ll get a series going.

When I typed in the word “horror,” the very first thing that came up on Amazon Prime was a Swedish movie called Draug. Perfect. That’s the kind of thing I’d never have heard of, let alone watched, on my own. Amazon says it’s from 2019, but every other source — including the movie’s own credits — says 2018. If you want to be technical, it was released in America in 2019. It currently has a rating of three stars out of a possible five. Let’s do this.

Creative principals: Directed by Karin Engman and Klas Persson. Starring Elna Karlsson, Thomas Hedengran, and Ralf Beck. Have you heard of any of them? I hadn’t. Maybe they’re a big deal in Sweden.

“In 11th Century Sweden, a missionary went missing in the dark forests that separated the North from the South. The King sent out a group of soldiers to find the responsible bandits. What they found was something worse. Much worse. (Please note that this film is in Swedish with English subtitles.)“

Promising user review: Ice Nine found the film “amazingly authentic” and awarded it five stars. “Put all those fairy tales about gods from the desert out of mind. This is the world before their stories were told. […] Honestly, this may be the most authentic portrayal I’ve ever seen attempted, and they do a damned good job.” This review does worry me a bit, though, because Ice Nine states, “If you don’t know don’t know anything about the viking age other than longboats and what you’ve gotten from the Vikings TV show, you may or may not enjoy it.” Uh oh. I don’t even watch Vikings. My knowledge does not extend beyond Hagar the Horrible. I may be in some trouble here.

Not-so-promising user review: Richard Jensen, on the other hand, called the film “disjointed, slow, badly subtitled, and pretty stupid” and gave it only one star. “I really want to like this,” he said, “and the positive reviews made me think it would be worth the watch. Nope!” But this may be a simple case of subtitle-phobia. Personally, I’ve seen my share of Ingmar Bergman films, and they’re all in Swedish with subtitles. To be fair, the subtitles in Draug are a little stilted with a few minor typos (“know” is spelled “now,” for instance), but they didn’t get in my way too much as a viewer. They’re generally fine.

My experience: Well, Ice Nine was right. I didn’t know anything about viking culture or Norse mythology, and I pretty much got my ass handed to me by this movie. I had a devil of a time figuring out what was happening and why. I couldn’t even tell the characters apart for most of the running time. This movie has a lot of morose, weather-beaten Swedish guys with scraggly beards and shoulder-length hair, and they all seemed the same to me. Plus I had to keep reminding myself that “Odd” and “Are” were people’s names.

And let’s just get right to the obvious. The damned movie is called Draug, and I didn’t know what a draug was. Wikipedia says that the term “draug” refers to “an undead creature from Norse mythology.” I can vouch for that. Based on this movie, a draug is like a muddy zombie crossed with a witch. The plural is “draugar.” According to Wikipedia, “draugar live in their graves, often guarding treasure buried with them.” The article doesn’t say anything about them possessing the living, but that’s how it seemed to work in this movie. Or maybe I misunderstood something. Was there treasure? I didn’t notice any.

Here’s what I understood about the plot, and you’ll soon see it wasn’t much. Some missionary — whom I thought of as Ned Flanders — has gone missing, and this other dude goes to look for him. The searcher — let’s call him Qui-Gon — brings along this younger lady because she’s been having prophetic visions. We’ll call her Carrie. The two of them set out into the woods. Their first stop is this little village where a Picard-looking dude seems to be in charge. He sits at the head of one of those big banquet tables, boozing it up like he’s Henry VIII or something. After some cajoling, Picard joins Qui-Gon and Carrie on their quest and brings his “slave” — a young lady we’ll call Betty — along with him. So we have Qui-Gon, Carrie, Picard, and Betty trying to figure out what happened to Ned Flanders.

I should mention that, since this is 11th century Sweden, all the buildings are made out of logs. I guess walls hadn’t been perfected yet. I should also take the opportunity to say that the movie’s greatest strengths are its crisp, moody cinematography and its eerie locations. The directors took their actors deep into the woods to make this film, and that was the right decision. Even though the performers were speaking Swedish, I could tell they were giving very decent performances, and their surroundings definitely helped give the whole production an air of authenticity.

Our main characters — I’d hesitate to call them heroes, since the morality in Draug is murky at best — arrive at some kind of remote homestead belonging to a sad-looking schlub (bearded, of course) with a Shemp Howard hairdo. Picard seems to be some kind of acting sheriff, so he starts searching the place for clues about what happened to Ned Flanders. The residents of this homestead are outwardly friendly-ish and cooperative, but they’re obviously hiding something major. In particular, there’s a guy who looks just like Christian Bale and who I think is Shemp’s brother-in-law. This guy is freaking out worst of all, so he’s clearly up to something.

One of the more interesting subplots involves Shemp’s mother-in-law, whom everyone in the movie calls “Wormcunt.” (At least they do in the subtitles. In Swedish, it was something else.) She has a little shack all to herself, where she stays because she has some gnarly-smelling leg sores. I couldn’t help but think of the character Chip (Ted Manson) from Talladega Nights (2006). One of the girls — I think it’s Betty — goes into the shack to interview her about Ned Flanders. She doesn’t seem to divulge any useful information, but she does tell Betty and her crew to go away. There’s a running joke in the movie in which the characters spit each time they refer to the mother-in-law, as if even talking about her is bad luck.

The movie just kind of drones on and on from there. Picard and the crew travel further into the forest, but then they’re set upon by a phalanx of attackers, all of whom I think are from the previously-mentioned homestead. (Though there was a badass pregnant lady I didn’t remember seeing earlier.) Fake Christian Bale (FCB) is definitely one of the assailants. Our guys win the fight, and I think they take some of the attackers with them. FCB is definitely in the rest of the movie. That I can say with some degree of certainty. One other thing to mention is that the music is nicely spooky for the most part, but it really disappoints during what should be an epic battle scene. They’d have been better off having no music there at all.

Oh, god, we haven’t even gotten to the draug, have we? Okay, the search party finds Ned Flanders’ corpse, and Carrie briefly imagines it coming to life. Apparently, the only way to stop a draug is by burning it and spreading its ashes in the water, so that’s what they do to Ned. But there might be more draugar in the woods. Picard and Qui-Gon go nosing around in some very cramped cave for reasons that eluded me. And then one of the girls — Carrie, maybe — gets possessed by an evil spirit. Picard actually tries to attack Carrie physically, knowing she’s now a witch, and the others physically restrain him and lock him up.

After that, the supernatural elements of the movie start ramping up, and there are some rather unconvincing CGI sequences that may be dreams or hallucinations by Betty or Carrie. Or maybe they’re actually happening. I was completely adrift by this point. The remaining characters start dying. Or maybe they don’t. I remember that Picard ends the main part of the movie by yelling, “NO!!!!!” but I couldn’t tell you what that was in reference to. The end credits play out over a scene of Fake Christian Bale, bloody, but alive, all alone in a canoe. I suppose he’s been left alive to tell the tale. Good luck, pal.

Would I recommend this movie: No, not really, unless you were already deeply-immersed in Norse mythology. It’s only 87 minutes long, but it felt much, much longer. I’m not soured on this Amazon Prime idea, though. Perhaps an American film would work better, preferably something that didn’t require footnotes.