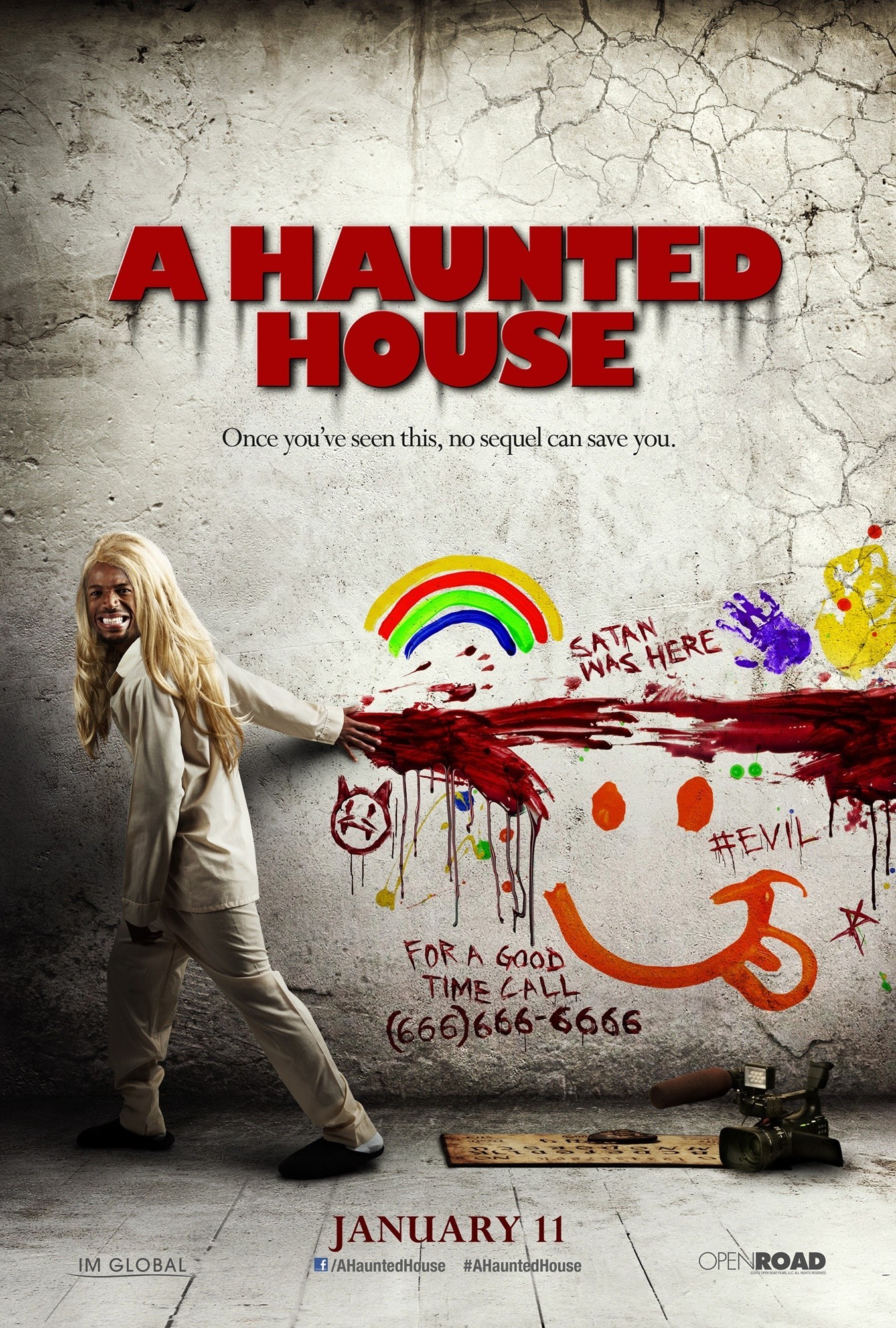 This Friday marks the theatrical release of yet another ‘hilarious’ horror movie spoof, in the form of A Haunted House 2, a sequel to last year’s A Haunted House. And yes, it stars Marlon Wayans. Because Marlon Wayans is drawn to horror spoofs like flies are drawn to shit. He’s the annoying little fly. They’re the steaming piles of shit.

Though I admit that the first couple Scary Movie films made me laugh back in the day, it’s been a long time since a horror spoof has succeeded in doing anything but make me really, really angry. In fact, there’s probably no type of movie that I hate more than the horror spoof. And I’ve got piles of doody like Stan Helsing and 30 Nights of Paranormal Activity with the Devil Inside the Girl with the Dragon Tattoo to thank for that.

Yes. Someone actually made a movie with that title. Surely you understand why that makes me so angry… ? If I was Bruce Banner, I would’ve turned green and burst out of my clothes when I laid eyes on that DVD cover. But since I’m me, I just mumbled angry sentiments under my breath and shook my head side to side.

Believe me, it’s not that I can’t handle horror movies being made fun of, because lord knows I use my Twitter account to make fun of horror movies on an almost daily basis – even the ones I dig. No, it’s the lack of actual humor in these so-called comedies that really chaps my ass and makes my blood boil.

The horror spoofs of today appeal to the absolute lowest common denominator, and the ‘humor’ is so childish, so uninspired and so lacking in creativity that it’s quite frankly downright offensive that these movies are targeted toward adults, rather than five year olds. Because they sure as hell come off like they were written by five year olds.

Judging by the painfully unfunny trailers, which are full of fart jokes and racially-driven humor – Hey look, a black dude! Oh snap, he’s got a gun!! – A Haunted House 2 is yet another movie that was made with brain-dead high schoolers in mind. Will I be seeing it? I’d rather rip off my eyelids, glue myself to my computer chair and queue up an endless stream of Biebs interviews. Does that answer your question?

But I’m a fair man. And so, despite my hatred for these sorts of movies, I decided earlier today to give A Haunted House a chance; a chance to prove me wrong, and a chance even to get me to change my mind, and drop my hard-earned $12 on the sequel. Yea, I was feeling generous. It happens from time to time.

Ya see, I had never actually seen A Haunted House, and I made a promise to myself that if it could succeed in making me laugh just once, one single goddamn time, I would head out to my local theater this weekend and buy a ticket to see A Haunted House 2. When we’re talking about a COMEDY film that’s an hour and a half long, I think asking for one single laugh is a pretty reasonable request, is it not? Again, I’m all about fairness, and I thought it was a pretty fair challenge to issue to the film.

And if asking for one laugh wasn’t fair enough, I promised myself that I’d accept a slight chuckle or even a tiny little smirk. One smirk, and you had my $12, Marlon.

86-minutes later and no laughter had emanated from my bedroom. Not even a chuckle. And a smirk never formed on my face. A Haunted House did not make me laugh once, not even once, which has led me to ponder one mind-boggling question; Just who the hell are these movies made for?

In A Haunted House, I watched Marlon Wayans fuck a bunch of stuffed animals, get raped by a ghost, smoke pot with a ghost and expel gas from his anus, and not only did all of the above moments fail to make me laugh, but they managed to piss me off, offend me and make me wonder what kinds of human beings actually find this type of nonsensical drivel funny. Obviously, A Haunted House and other horror spoofs like it are doing well at the box office, because if they weren’t, they would surely cease to exist. So again I ask; who are these movies made for? And who in their right mind actually finds them to be humorous?

Look, I’m as immature as anyone, and my sense of humor is borderline childish, as my wife will attest. Pretty much everything makes me laugh, and so it’s pretty easy for comedies to tickle my funny bone and succeed in their mission. I don’t ask for much, and it doesn’t take much. But I’m sorry. Endless ‘quick in the sack’ jokes, toilet humor, digs at the Kardashians and generic parodies of every single group of human beings on the planet – from the mentally challenged to gays, blacks to Mexicans – just don’t do it for me. It’s just not funny, and it truly bothers me that so many people continually support such lazy writing.

This isn’t comedy, my friends. This is stupidity. Pure and utter stupidity. And I’m so glad I don’t have to support A Haunted House 2 at the box office, because it truly would have pained me to do so. So thank you for not making me laugh, A Haunted House. Sincerely. Thank you.

It’s time you either go away or start being funny, horror spoofs. And I’m leaning more toward the former.