It’s always exciting to discover things about your favorite movies that you had never noticed, despite watching them countless times. On a recent viewing of Friday the 13th: Part 3, for example, I noticed something that I was pretty surprised about, and fairly shocked that I had never before picked up on.

Early in the film, Edna (grocery store lady) is watching a news report on TV, about the murders from Part 2. Though the majority of the audio from the report can be heard loud and clear, there’s a small portion of it that is drowned out by the film’s score, and the sounds of Jason’s trademark stalking noise.

But if you turn the volume up during that scene, you can hear that portion of the news report, which contains some highly interesting info about the crime scene. So turn it up and hit the play button below, to hear what I’m talking about.

Yes, you heard right. “Reports of cannibalism and sexual mutilations are still unconfirmed, at this hour.”

Is there more to Jason Voorhees than the stalking and slashing we’ve seen him do? Is he a sexual deviant, and perhaps even a cannibal? Or is this merely an example of sensationalism at its finest? Well, the news report isn’t the only evidence to support these bold claims.

Later in Friday the 13th‘s three-dimensional sequel, Chris Higgins tells love interest Rick about a previous encounter with Jason, which we then see in a brief flashback scene. Chris tells Rick that her mother slapped her one night, and as a way of getting back at her, she ran off into the woods, where she spent the remainder of that night.

I’ll let Chris tell the rest of the story, since it is hers to tell…

So Chris was attacked by Jason in the woods, but not killed. She doesn’t remember anything that happened, and her parents refuse to acknowledge the event. As many fans over the years have pointed out, the implication here is that Jason did something terrible to Chris – and I don’t think it’s a stretch to assume that he raped her.

What actually happened that night will forever be as much of a mystery to us as it is to Chris, but I have heard that an earlier draft of the script made it clear that she was in fact raped by Jason, but that they decided to leave the attack more ambiguous, for fear of the film being too frightening. But even left ambiguous, as it is, what other explanation is there for Jason ‘attacking’ Chris? If his mission was to kill her, then I think we all know he would’ve succeeded.

So Jason appears to have sexual desires, but what about those ‘sexual mutilations,’ mentioned in relation to the bodies found at Crystal Lake after the events of Part 2? I went back and re-watched the franchise’s first sequel in preparation for this piece, and I noticed something else that I had never before taken note of.

Toward the end of the film, when Ginny stumbles upon Jason’s altar to his dead mother, there are a few bodies propped up against the altar, including one badly decomposed corpse that would appear to be Alice (given the object sticking out of the corpse’s skull, in the same spot Alice was stabbed at the beginning of Part 2), as well as the fresh body of the cop, who had earlier in the film been killed in Jason’s shack.

But it’s the third body at the altar that is most interesting. While it makes sense that both the cop and Alice’s bodies would be there, given the cop was killed in the shack and Alice’s body could be seen as an offering to Jason’s mother, to show her that he avenged her death, it’s not as easy to explain why Terry’s body is also there. 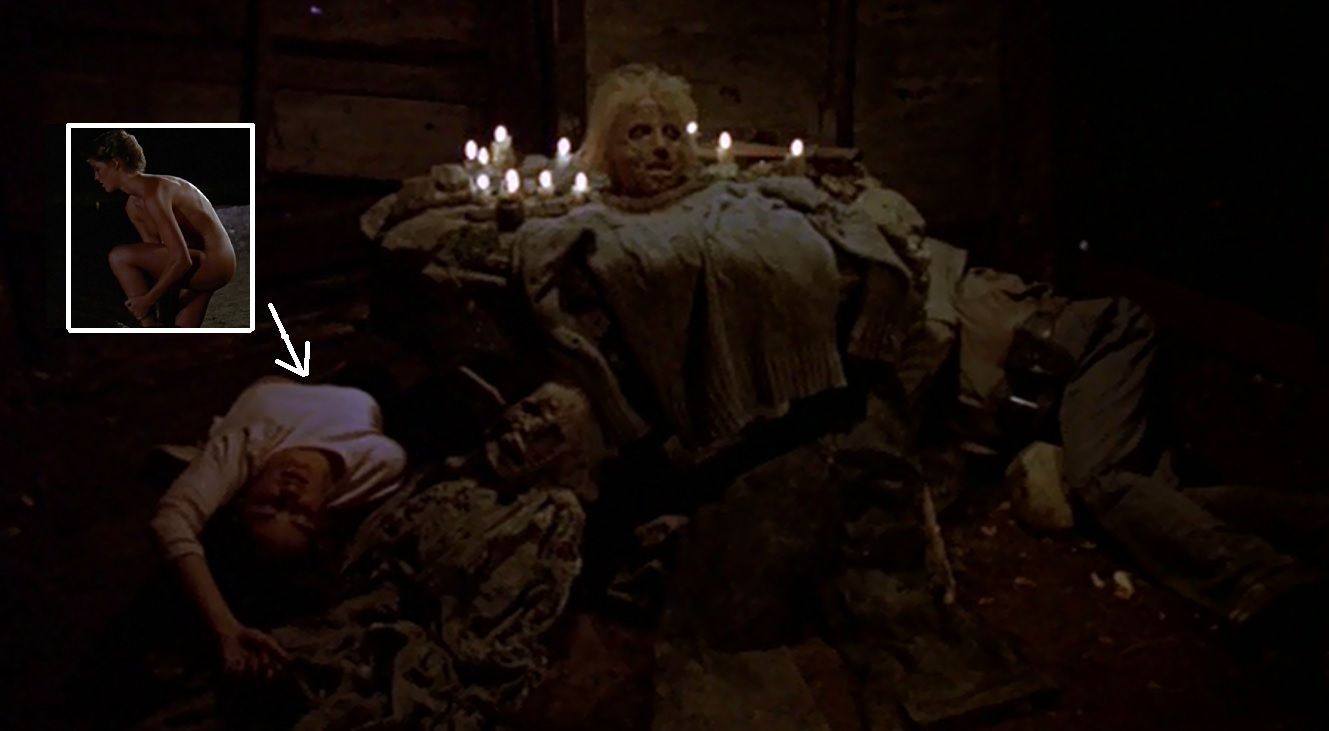 Earlier in the movie, we saw that Terry and Jason came face to face, but we never saw her actually get killed. Out of all of Jason’s victims in the film, the only one he decided to drag back into his shack, and the only one we never saw what he did to, was the scantily clad vixen he had earlier been spying on, while she was skinny dipping – innnnteresting.

Could Terry be the victim of this so called ‘sexual mutilation’, hinted at in the news report from Part 3? If not, then what the hell was Jason doing with her body? Why bring it back to his living quarters? And why did we never see what he did to her, in a franchise that’s known for graphically showing us how Jason dispatches his victims?

I don’t recall any evidence from any of the Friday films that supports the theory that Voorhees was in any way a cannibal, but you can’t help but wonder what the hell he eats out there in the woods, to keep himself so bulky. If he’s killing people, he might as well just go ahead and eat them too, right? I mean, why the hell not? Hard to believe that he survives only on the animals he finds in the woods.

Come to think of it, we’ve never even actually seen Jason kill an animal (though there was that mutilated dog, in Part 2), so if he’s only killing humans, then it’s not at all a stretch to jump to the conclusion that he’s also eating those same humans, now is it? But again, I’ve got no concrete evidence to support that one.

Now obviously, we’re dealing with a character here that changes from movie to movie, depending on what any given writer decides to do with him, so to try to establish any continuity or build a real character profile for Jason is rather silly, and is at the end of the day nothing more than fan fiction. But still, it’s interesting to discuss, and there’s no doubt that at least in the earlier installments of the series, it was strongly hinted at that Jason is interested in more than just stalking and slashing.

Is Jason Voorhees a rapist? A cannibal? A necrophiliac? That’s all up to each individual fan to decide, which makes this kind of discussion so much fun. So if you’ve got an opinion on the matter, or have any further evidence to either support or dispute these theories, I’d love to hear it. Sound off below!