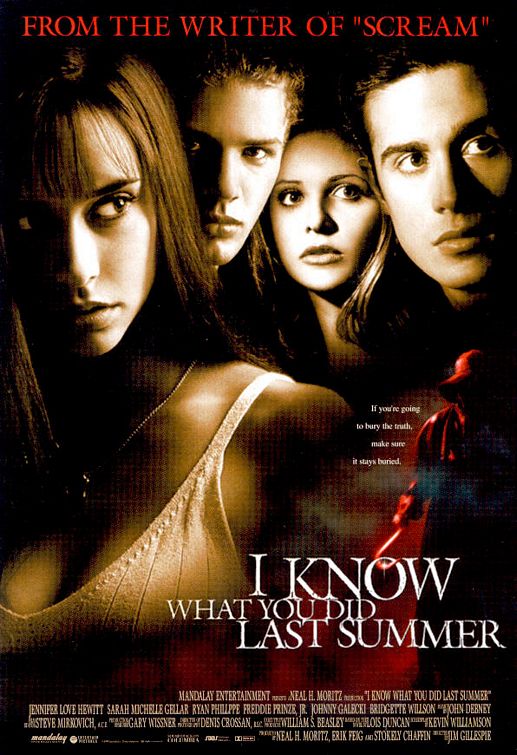 The surprising announcement was made yesterday that Sony is developing a remake of 1997’s teen slasher flick I Know What You Did Last Summer, with Absentia/Oculus director Mike Flanagan attached to both write and produce.

Yep. Now that the 1980s have been mined for all they’re worth, the remake train is passing through the 90s, proving that no movie is too current to fall victim to Hollywood’s obsession with turning old things into new things.

Of course, a whole lot of hatred has been spewed across the community in the wake of the news, as is always the case when a remake is announced.

Most of those who consider I Know What You Did Last Summer a bit of a guilty pleasure as well as those who see absolutely no merit in it have both expressed the typical ‘WHY?!’ sentiments, while others have posed the opposite question; ‘Why not?’

Though I don’t care for the term ‘guilty pleasure,’ I guess you could refer to I Know What You Did Last Summer as one of mine. Trust me, I know it’s not one of the genre’s crowning achievements, but the late 90s slasher movement has always held a special ‘I won’t turn it off if it’s on TV’ place in my heart – and I Know What You Did Last Summer is my favorite export of that post-Scream era.

Is it a good idea to remake a not-so-beloved 90s horror film or a terrible one? As always, only time will tell the answer to that question. But there’s one thing I am absolutely sure of, at this very moment in time; I’d much rather see a slasher film – remake or not – up on the big screen, than paranormal found footage movie #127.

If you’re a regular theater-goer, you’ve by now noticed that 99.9% of all theatrically released horror films are of the paranormal variety – and, oftentimes, they also dwell under that ‘found footage’ umbrella. I’m not just talking this year but also the past several years, as it’s been hard to find a non-paranormal movie in the wake of Paranormal Activity‘s smash hit success.

From Insidious to The Conjuring, Deliver Us From Evil to The Devil Inside, we’ve been absolutely beaten over the head in recent years with things like demonic entities and demonic possessions, the market as flooded with similar movies as it was back in the 1980s, during the slasher boom. Hell, when we look back on this period in our genre’s history, years from now, we’ll likely be referring to it as the paranormal boom, and the trend is showing no signs of slowing down.

According to my calculations, it’s been over a year since a slasher film cut up the big screen, with movies like You’re Next and Texas Chainsaw 3D being the most recent ones to do so. Not many others come to mind, though reaching back a handful of years brings big screen slashers like Scream 4 and the Friday the 13th and Nightmare on Elm Street remakes to mind.

My point? My point is that slasher cinema is in big time need of a revival, and the fact that a MAJOR studio is working on and soon going to be releasing a slasher film feels like a pretty damn refreshing piece of news – despite the fact that the film in question is of course a remake. Would I prefer Sony work on an original slasher? Of course I would. But remake or not, a slasher up on the big screen, in this day and age, can never be considered a bad thing.

And here’s the other thing that’s not bad about this latest piece of remake news. I Know What You Did Last Summer is a huge established property, with a large built-in fanbase. What that means is that it’s pretty much already written in the stars that a remake will draw big box office numbers, and whether you welcome remakes with open arms or loathe them, a high-grossing slasher film can only help the future of the genre – and maybe, just maybe, pave the way for new and original slashers.

Now don’t get me wrong here. I’m not saying that a remake of I Know What You Did Last Summer has the power to change the landscape of horror cinema, I’m merely suggesting that it *could* help kick-start a shift away from the paranormal fare we’ve been steadily ingesting for the last several years. And again, the fact that a major studio is investing money into a slasher property says something in its own right – something that feels refreshing to hear.

(Go figure. The state of big screen horror has gotten so stale that a remake is going to feel like a breath of fresh air. Scary, isn’t it?)

Horror fans often consider I Know What You Did Last Summer to represent a low point in slasher cinema, and oddly enough, it feels today like a remake of that film could help inject some new life into that stagnant sub-genre. That’s like, rain on your wedding day levels of ironic.

Again, just thinking ahead (and aloud) here, and it’s possible that I’ll look back on this post in a couple years and wonder what the hell I was thinking, but for now I remain excited about watching attractive young people get sliced and diced up on the big screen, in the near future.

It’s been too long. Way too long. And ghosts just aren’t doing it for me anymore.