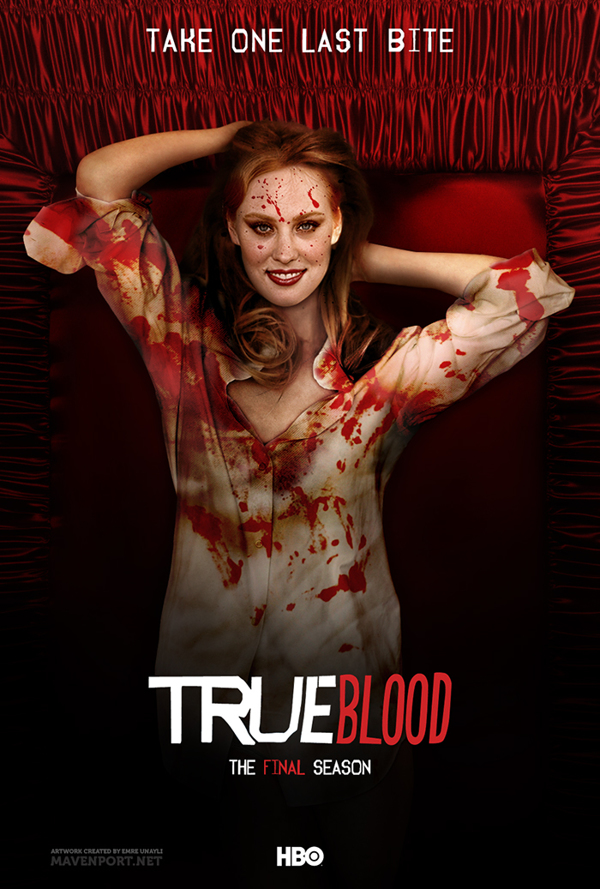 Well, it looks like the Modus operandi of True Blood‘s final season is going to be unceremonious character deaths, and since last night’s was so major, it seems only right that we kick off this week’s episode discussion by jumping right in.

Alcide quite literally bit the bullet at the very end of the episode, being shot dead by a member of the Bon Temps hate mob. His death came after a handful of H-Vamps were turned into splats of CG blood courtesy of a heroic Jason and Andy, drenching poor Sookie with their infected life juices – don’t worry, none got in her eyes or mouth.

It was a shocking moment, to say the least, made all the more shocking by Sookie’s refusal to turn Alcide into a were-vampire, and simply letting him drift off to whatever sort of afterlife werewolves drift off to.

I think it was pretty safe to assume that several major characters would be losing the battle in this final season of the show, and Alcide is the second one to fall thus far, in only three episodes. It was of course Tara who met the true death in the season premiere, and though I was at first pretty sure that her off-screen death meant she wasn’t really dead, Pam all but confirmed her demise last night, remarking to Eric that she ‘felt’ her progeny’s end.

On the one hand, I’ve always been a fan of character deaths in movies and TV shows that are shocking and totally out of left field, but on the other I just can’t help but feel that’s not the right way to handle these particular characters, on this particular show – especially not at this particular point in time.

Though it’s admittedly a bit dramatic to put it this way, the fact of the matter is that we’ve now spent several years of our lives with these characters, and it’s almost impossible to not be disappointed by the way both Tara and Alcide have kinda sorta been thrown away, with the show not even offering us that emotional final moment of being in their presence.

It’s important to have that moment with a character who’s about to die, and though the writers of The Walking Dead have always played those death scenes pitch perfectly, the writers of True Blood seem to be having a bit more difficulty doing so.

Rather than Alcide’s death being impactful or feeling like a fitting end for the character, the bullet through his head instead felt like nothing more than a way for a fairly boring episode to end on a shocking note, which is a shame because Alcide certainly deserved a much more emotional send-off.

The other bummer of Alcide’s death is that Sookie had shortly prior revealed to Bill that she wasn’t all that in love with Alcide, and so it seemed quite clear that his death was written into the show for the main purpose of allowing for Sookie and Bill to finally get back together, shortly down the road. I almost got the sense that Sookie was happy Alcide was dead, so that she didn’t have to tell him what she had told Bill, and though I know that wasn’t something us viewers were supposed to be feeling, it was hard not to feel it.

All that said, it’s likely that Episode 4 will pick up where last night’s left off, and give us a bit more closure for the character, so I suppose Alcide’s death still has a chance to be salvaged, and actually feel like it means something. Then again, the character has been painfully underused of late, so they’ll probably just move on and ignore it.

Aside from the singing of Alcide’s surprising swan song, we were treated to a handful of flashback sequences throughout the episode, the first of which showed the intense love Eric has for Pam. In France, in the late 1980s, Eric was forced by the Vampire Authority to play God and choose their victim; either his girlfriend, who he was deeply in love with, or Pam. Eric reluctantly chose his girlfriend, the scene further bolstering the strength of his hundred-year-old relationship with Pam.

In the other flashback sequence, we saw a pre-vampire Bill Compton taking photographs with his wife and children, before he went off to war. Both sequences were ultimately kind of pointless, given the fact that they showed us things we were already quite aware of; Eric loves Pam and Bill had a normal family life once. Been there. Seen that.

It’s funny because several characters throughout the episode made mention of the fact that the past doesn’t matter, and the only thing that really matters is the now, which is something I wish the writers had kept in mind, while scripting this final season. At this point in time, most – if not all – flashbacks feel like pointless time-killers, and I hope that in future episodes more time is spent on present events and situations.

What we did learn last night was that Sarah Newlin is still alive and well, hiding out in California – because, ya know, this season wasn’t spending enough time on characters we really don’t care about. A yogi going under the name Noomi, Sarah’s purpose for being written back into the show was revealed toward the end of the episode, when Pam informed Eric that she was still alive, prompting his infected ass to get off the couch for the first time this season.

Good to see Eric back in action, and I’m actually looking forward to seeing he and Pam unite for one last adventure, as they’re two of my personal favorite characters on the show. Adding another layer to their pursuit of Sarah, Eric and Pam aren’t the only ones that want her blood, as the Vampire Authority’s Crazy 88 – the same assassins who killed Eric’s girlfriend decades prior – are also pursuing her, after lopping off the head of her highly sexual yoga teacher.

Meanwhile, in Bon Temps, Sam, Jason, Andy and Jessica spent the episode fending off the angry mob of townspeople, who killed Sam’s vampire protector and shot Jessica in the arm. Unusual for a vampire, Jessica didn’t immediately heal, presumably because she hasn’t fed in a while. In the episode’s most satisfying moment, Mrs. Fortenberry was FINALLY killed off, when Jason’s vampire gal pal (still don’t know her name) ripped out the contents of her bloated stomach.

Can I get a hallelujah?!

Speaking of characters whose names I still don’t know, Jessica’s bi-sexual vampire boyfriend engaged in another fairly pointless sequence of drug-induced flirt fucking with Lafayette, the two of them hanging out on the couch and toying with the idea of doing things nobody wants to see them do.

First off, can we please get Lafayette off the couch this season, and get him involved with the main storyline? And second, does anyone really care about Jessica’s boyfriend? So underdeveloped have both he and his relationship with Jessica been that I honestly have to remind myself who he is every time he pops up on screen, which is exacerbated by the fact that the original actor who played the role last season was recast, after apparently refusing to take part in sex scenes with another dude.

Lafayette is one of the most consistently entertaining characters on the show, but he just feels so underused this season, wasting away on a couch and flirting with a character that I couldn’t care less about. Then again, wasting good characters and spending far too much time on developing useless ones seems to be the norm for this season, so I guess it’s only right that Lafayette has been turned into the world’s most fierce couch potato.

The only other thing worth mentioning – because I can’t bring myself to even write a paragraph about Lettie Mae, Willa and that Reverend dude – was the set-up for Sookie and Bill’s inevitable reunion, which saw Sookie using herself as H-Vamp bait, with Bill hiding up in a tree to protect her. Her plan? Get kidnapped by the H-Vamps and led to their lair, at which point Bill can swoop in like a fanged Superman and save her and all the other characters who are chained up in the basement of Fangtasia.

By the way, how the hell has nobody ever thought to look in Fangtasia, for the H-Vamps? It seems like such an obvious place for them to be hiding out, and it requires a whole lot of suspension of disbelief to buy into the fact that NOBODY has even considered it as an option. Sigh.

Anyway. The episode’s shared moments between Bill and Sookie were admittedly nice to see, and the two all but revealed that they’re still in love with one another, and just haven’t been all that happy without each other. Sookie even drank Bill’s blood for the first time in a long time, and now that she’s a single woman again, it shouldn’t be long before she’s drinking a whole lot more than his blood. If the past has taught us anything, it’s that Sookie never waits very long, to shack up with another creature.

Much like the first two episodes of this season, last night’s left me quite underwhelmed, and did little to get me excited about the future. Like I’ve stated in my previous recaps, way too much time is being spent on ancillary characters and their uninteresting side plots, with major characters either being completely tossed into the trash or totally wasted.

There’s just too much going on, and the characters we actually care about are suffering big time. I suppose that’s been the issue with True Blood all along, but it’s an issue that’s more damaging in this final season than it’s ever been in the past.

Mostly though, I’m just bummed that I’m not having fun. Above all else, True Blood has always been a mindless bit of fun, and right about now I’m mourning the loss of that entertainment factor. Despite all that’s going on, life in Bon Temps has been kind of dull, and I’m wondering if it’s time to check out early and book the first flight out of town.

Ah, who am I kidding? I’ll stick with the show until the end, if only so I can come on here and complain about it – like a true fan, in the internet age!