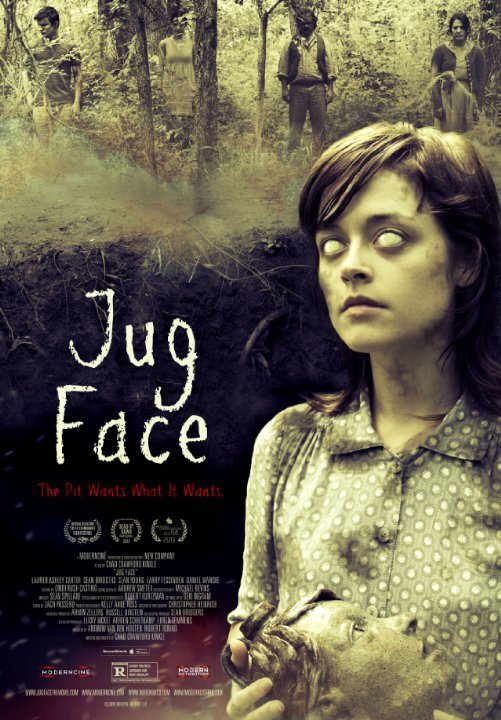 Like countless horror films, Jug Face begins with two attractive young lovers frolicking in the woods, eventually tearing their clothes off and doing that thing so many slasher movies have taught us that it’s totally not okay to do… ESPECIALLY in the woods.

Released last year, and written/directed by first time feature filmmaker Chad Crawford Kinkle, Jug Face centers on the residents of a small backwoods community who strongly believe in the existence of a pit-dwelling supernatural entity that requires regular ritual sacrifices. When pregnant teen Ada becomes convinced that she’s the next sacrifice, she hatches a plan to escape the community before she’s fed to the pit.

Made on a low-budget, Jug Face is an intimate film comprised of little more than a small group of actors, a wooded location and an ominous hole in the ground, one’s enjoyment of it almost completely dependent upon how much one accepts and buys into the world being portrayed, and the characters who inhabit it.

Thanks to all around fine acting and an unwavering sense of conviction on the part of the filmmaker, I had little trouble buying into and accepting all of the above – for the most part, at least – and as a result, Jug Face was for me an intriguing little indie gem that reminded me of something horror films all too often leave me doubting; there are still filmmakers out there with original ideas.

In Jug Face, Crawford Kinkle literally creates an entire world that’s brimming with originality and its own unique set of rules and regulations, and part of the joy of watching the film is learning those rules and experiencing how this strange other half lives, so to speak.

Full of colorful characters, including a grandpa who’s only slightly more mobile than the one seen in Texas Chain Saw Massacre, the community at the heart of the film is a pretty damn interesting one, to say the very least.

They live off the land, take regular trips into town to sell their homemade moonshine and steal necessary items from a family run convenience store and oh, did I mention that they’ve got their own psychic, who they rely on to find out who’s the next resident to be sacrificed to the pit?

Without giving too much away, the title of the film refers to moonshine jugs this soothsayer of sorts makes whenever he gets a vision, with the likeness of the person depicted on the jug indicating whose blood needs to spill into the pit.

It’s a fully realized world and though the idea is laced with some inherent corniness, particularly when a supernatural element connected to the pit is visually seen, it’s again the conviction and straight-faced seriousness from all parties involved that keeps the film from ever falling too far on the silly side. Seemingly against all odds, Jug Face totally works, and is at the very least a fascinating slice of originality that proves Crawford Kinkle’s worth as a filmmaker.

It would be impossible to sing the praises of the director’s debut effort without praising the cast, whose performances make the unreal situations and events feel quite real. Lauren Ashley Carter is a particular standout as Ada, the one person in the community who seems to be aware of the fact that their way of living is fucked up, and wants to get out of there as soon as possible. Fans of Lucky McKee have come to expect memorable female characters in films he’s involved with, and Jug Face – which McKee produced – is certainly no exception.

Also noteworthy is The Woman’s Sean Bridgers as Dawai, the mentally challenged man who sees through the pit’s eyes, and creates the titular ‘jug faces.’ While Bridgers was a frightening force as Chris Cleek in The Woman, here he’s a charming character who brings a whole lot of heart to the proceedings, showcasing a great deal of range for the actor. The cast is also filled out with familiar faces like Larry Fessenden and Sean Young, and it’s all around an impressive ensemble.

Rounded out with another exceptional score from Sean Spillane (The Woman), Jug Face is an 81-minute treat that’s well worth a stream on Netflix, where it’s currently available for such enjoyment. So take a break from unoriginal Hollywood horror and give it a chance, next time you find yourself in the mood for an interesting piece of indie cinema. You just might dig it as much as I did.