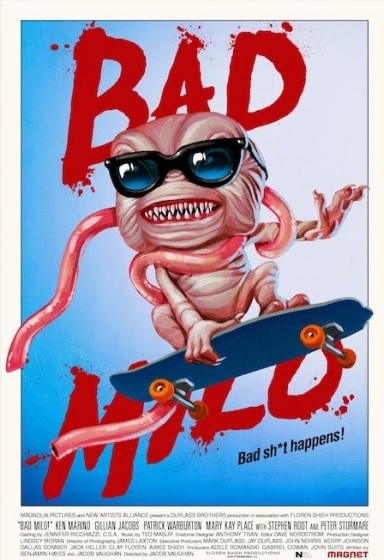 Maybe I’m just way too immature for my own good, but if you’re asking me, it’s kinda hard not to love any movie that takes you on a tour into a man’s mouth, through his digestive tract and out of his butt hole, within the first 60 seconds of run-time.

Yep. That’s Bad Milo for ya, and the big L word is one that I have no problem hurling toward it.

Released on home video just about a month ago, and now available for instant streaming over on Netflix, Bad Milo stars Ken Marino as Duncan, a dude whose stress is getting the best of him. Stress can kill you, as they say, but Duncan’s stress is proving to be more harmful to others, than it is to himself.

He’s got a demon living inside of his ass, you see, and that demon emerges from Duncan’s rectum whenever he gets super angry and/or stressed, on a mission to brutally murder all of those who are complicating and ruining his life. Think of it like the Incredible Hulk… except when Duncan gets mad, a homicidal hemorrhoid comes out to play.

As a huge fan of fun and whacky 80s horror movies, especially ones that are about little rubber monsters – Gremlins, Ghoulies and Critters come to mind – I had an absolute blast with Bad Milo, which is very much a throwback to those days when horror was just a little bit more fun than it tends to be nowadays.

Those kinds of rubber monster movies have all but disappeared from the landscape of the genre, in favor of ghosts, zombies and CG monsters, and Bad Milo proves that there’s still nothing quite as entertaining as a practically created creature running wild. In the annals of small scale rubber movie monsters, the titular abomination is sure to go down in history as one of the greats, a genuinely adorable little bugger that’s Gizmo when he wants to be, and Stripe when he’s forced to be.

I want one for myself. I just don’t want to have to shit him out. I guess I should adopt, eh?

Countless horror movies in recent years have actively set out to garner comparisons to movies from the heydays of companies like Full Moon and Troma, and if you’re asking me, the majority of them come off as just plain silly and eye-rollingly stupid, rather than entertaining or humorous. There’s a fine line between stupidity and humor, is I guess what I’m trying to say, and Bad Milo always manages to lean more toward the side of humor, which is an impressive feat considering the obviously ass-inine subject matter.

Bad Milo is the best Full Moon movie that Full Moon never made, is the best way I can describe it, and it’s truly one of the most downright entertaining horror comedies in recent years, packed with hilarious performances, buckets of blood and terrific old school-style effects. A perfect double feature with another recent gem like Slither, and a true cult classic in the making.

Oddly enough, underneath all the absurdity and laugh out loud humor and hijinks is also a pretty sweet little story about accepting the you that’s buried deep within yourself, so to speak, and it’s that story that allows for Bad Milo to be a genuinely good movie with a lot of heart, in addition to one that provides mindless, immature humor. That’s what so few filmmakers who make these sorts of movies unfortunately fail to realize, and it’s what allows for Bad Milo to really shine, as opposed to just being another silly exercise in stupidity.

This week has been a really stressful one for me, and without going too far into detail about my personal troubles, let’s just say that Bad Milo was just what the doctor ordered, for me tonight. A cinematic pick-me-up, of the highest order. If Peter Stormare saying the word ‘anus’ makes you giggle, then I trust you’ll feel the same way. Because he says anus a lot in this movie. And it’s hilarious every time.

Oh, and I guess it wouldn’t be fair to review Bad Milo without giving a shout-out to Frank Henenlotter, so hi Frank. You’re awesome. And we haven’t forgotten about you.