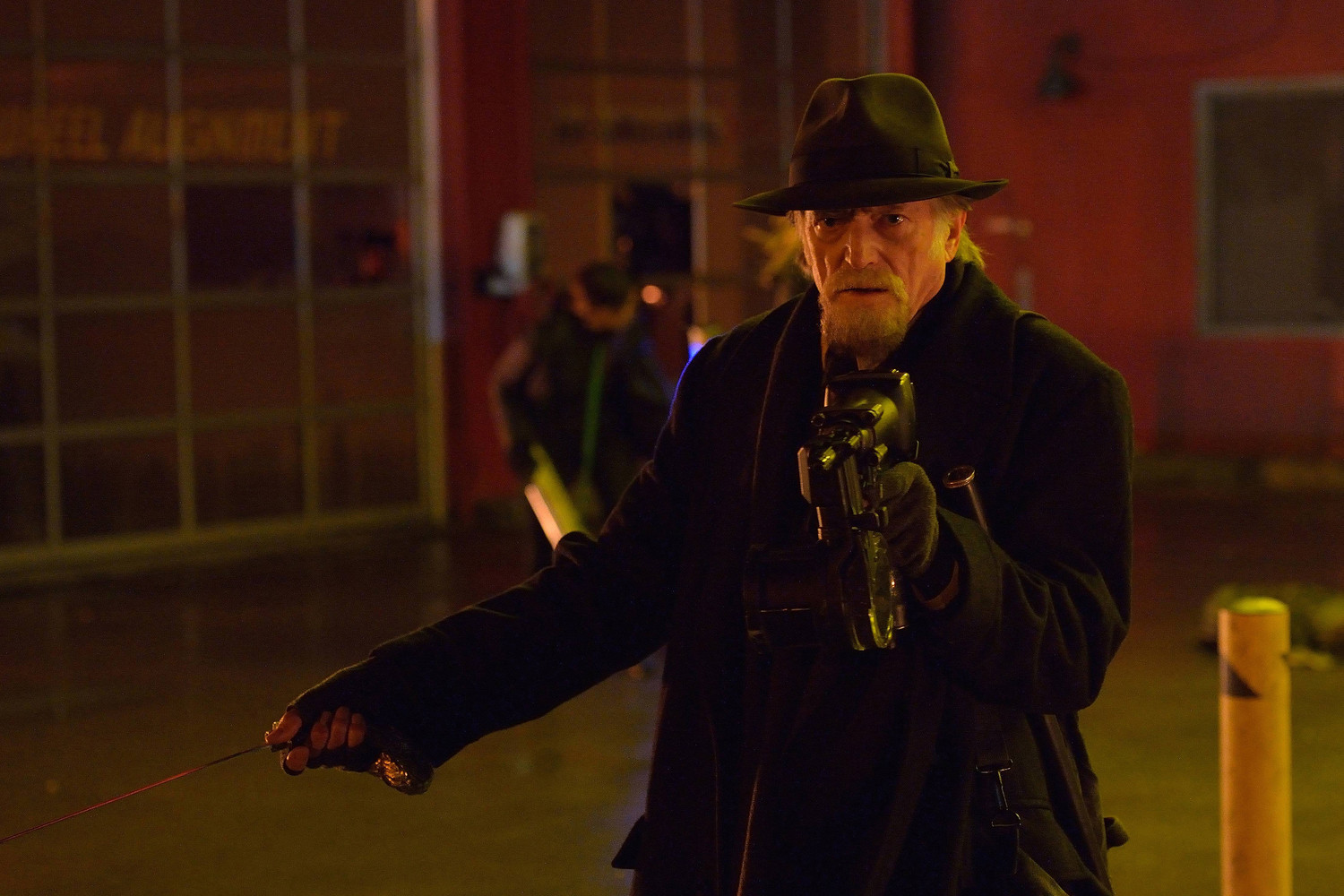 Prior to this past Sunday night’s episode of The Strain, show-runner Carlton Cuse took to Twitter to let his followers know that it’s his personal favorite hour of the show to date, in a follow-up tweet writing that “A lot of stuff we’ve set up starts to pay off.”

As promised, ‘Creatures of the Night’ was indeed a ‘business has just picked up’ sort of episode, and I’ve got no choice but to agree with Cuse on his personal opinion of it; it was without question The Strain’s finest hour, thus far.

Whereas the vampiric threat in the previous seven episodes never seemed all that real, confined to specific storylines and seemingly absent in others, shit really hit the fan in a big way in this latest episode, the show for the very first time properly depicting the widespread scope of the horror.

At the start of the episode, Ephraim, Nora, Setrakian and Jim broke into a medical supply warehouse on the hunt for ultraviolet lights, in the process meeting up with exterminator Vasiliy Fet – who came to the same realization about the vampire-killing power of UV lights and was also looting the warehouse for them.

After some initial conflict, Fet agreed to fork half of his UV bounty over to our group of heroes, and it wasn’t long before all five of the show’s ‘good guys’ were forced to team up and fight for their lives against a common enemy: the infected/vampires/strigoi/rat people/whatever you want to call them.

While Ephraim, Nora and Jim hit up a nearby gas station convenience store for more survival supplies, Fet and Setrakian bonded by clearing the parking lot of a horde of long-tongued monsters – Setrakian using his patented one-two punch of nail gun and sword, while Fet brutally caved their heads in with a steel bar.

As more and more of the creatures converged on the gas station, everyone was forced inside the convenience store, the main characters joining the likes of a bread delivery man, a customer (played by makeup FX legend Rick Baker!), a clueless cashier and two young female friends – one of whom was the hacker Eichorst hired to take down all modern technology.

All of them holed up inside the small convenience store, the action played out like an episode of The Walking Dead, rife with conflict both dramatic and horrific. While the hacker’s friend disobeyed common sense and made a run for it, managing to safely escape the confines of the store, the delivery man and Baker’s character weren’t so lucky, not surviving very long on the outside.

And then there’s Jim Kent. After suffering a small scrape on his face at the hands of one of the vampires, Ephraim realized that Jim was infected, as one of those gross little worms was swimming around inside his face. In the show’s most cringe-inducing moment, Ephraim sliced open Jim’s face and pulled out the worm, sure that doing so would save his friend-turned-enemy-turned-friend’s life.

Though initially it seemed that Ephraim was onto something, the UV lights soon revealed that hundreds of worms were still coursing through Jim’s face and body, leading Setrakian to insist that the only solution was to ‘set him free.’ Though Ephraim was against the idea of killing his friend, Vasiliy knew it was the only course of action, blowing Jim’s brains out before he had the chance to turn.

The body count on The Strain has been pretty damn high – hell, over 100 people were dead right at the start – but Jim’s death was the first major character death we’ve been dealt on the show, which again served to bolster what we were told but not really shown in previous episodes; the threat is real, and New York City is a war zone.

After knocking out power to the convenience store, the strigoi smashed the windows and caved in the ceiling, reminding us that these aren’t the type of vampires that need an invitation. Forced outside the store, which quickly filled up with the beasties, the gang set fire to the building and gas station, driving off into Episode 9 in the deceased delivery man’s bread truck.

Though we saw very little of Eichorst, the episode did provide us with more information about him and the show’s vampire species as a whole. After being shot in the leg at the tail end of Episode 7, we saw this past Sunday night that Eichorst is very much feeling the effects of the bullet, as it made contact with bone. Though flesh wounds almost instantly cure, Setrakian relays, bone injuries are a bit more problematic for vampires, revealing that silver isn’t their only weakness.

We also learned the reason that Eichorst is more human than seemingly all other vampires on the show; while most vampires are merely The Master’s monstrous henchmen, his right-hand men are granted the luxury of retaining some of their humanity, allowing them to be more than mere monsters. It’s these little tidbits of knowledge that add to the overall mythology of the show, so it’s always nice to be fed them.

By focusing solely on the vampire threat, and not wasting any of our time on dull side-storylines, ‘Creatures of the Night’ managed to be The Strain’s strongest episode to date, proving that the show has the potential to be even better than I quite frankly ever thought it could be.

Whereas the show was previously entertaining at best, this latest episode was a truly exceptional hour of television, hitting many of the same notes that The Walking Dead is so damn good at hitting. Intense and dramatic, yet still a lot of fun, ‘Creatures of the Night’ brings The Strain to a whole new level, and I’m really hoping it represents the manner in which the remainder of this season will play out.

From where I stand, it looks to me like the show’s proverbial sweet spot has finally been found.