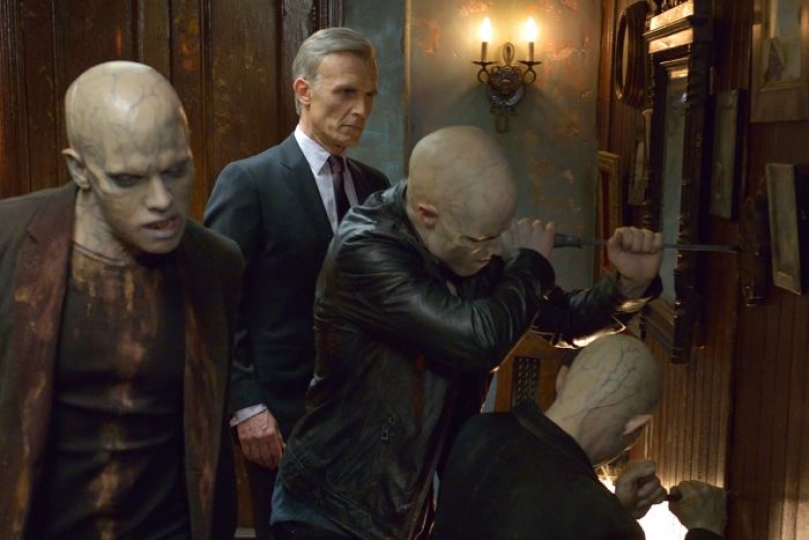 One of the strongest aspects of The Strain‘s inaugural season has been the decades-spanning story of good vs. evil, reflected in the relationship between Abraham Setrakian and The Master’s right hand man, Thomas Eichorst.

If Eichorst is Dracula then Setrakian is Van Helsing, and it’s of course no coincidence that the latter shares a first name with the archenemy of Bram Stoker’s iconic creation. More of that epic rivalry was explored in ‘Last Rites,’ as Setrakian fully became The Strain‘s Abraham Van Helsing.

Returning to the safety of the pawn shop after last week’s horrifying trip into NYC’s vampire-infested subway tunnels, Vasiliy, Eph and Nora breathed a huge sigh of relief, while Setrakian sulked over his failure to end The Master.

Through a series of flashbacks, set in Albania in 1967, we got a taste of the character’s earliest pursuit of the show’s main villain, who he first encountered in a Nazi internment camp. Discovering his underground bunker at the bottom of a well, Setrakian entered the lair with sword in hand, the scene very much echoing last week’s subway scenes.

After coming across a vampire that spoke in The Master’s voice, eerily telling him that he’s essentially fucked, Setrakian headed for higher ground, once again coming face-to-face with Eichorst. Killing his horse and stealing the rope he used to repel down into the well, Eichorst left Setrakian to ponder his mission failure, though he managed to climb his way out of yet another crude prison.

Though Eichorst spared Setrakian, his wife Miriam wasn’t so lucky. Setrakian returned home to find the place ransacked, and it wasn’t long before his wife walked through the door with two young children – all three of them infected. Setrakian was forced to behead his wife and then he proceeded to cut out her worm-infested heart, keeping it to preserve her memory.

Like the Nazi internment camp flashbacks, these glimpses into Setrakian’s past were again quite compelling, and the scene where his vampire wife walked through the door with two vampire children was particularly chilling – given the fact that Setrakian had earlier promised his wife they would soon adopt two kids. The flashbacks also served to finally let us know what that jarred thing is in the basement of the pawn shop (his wife’s heart), adding another layer to the show’s most interesting character.

Unfortunately, last night’s flashbacks were not without their problems, which came in the form of some shoddy old-age makeup on the actor portraying a young Setrakian. It may sound like a minor gripe, but it was hard not to notice the strange makeup, which took me out of the action a bit. Couldn’t help but wonder why they didn’t just get an older actor to play the role, but what can ya do.

While Setrakian was having all sorts of flashbacks, hacker Dutch returned to the pawn shop, intent on righting all the wrong she had previously done. Making up for disabling the internet, Dutch hacked into the emergency alert system, allowing Eph a short period of time to address everyone watching television, and let them know what’s really going on out there in the world.

Setting up that hack, Dutch took the time to do some heavy flirting with Vasiliy, further adding to the sexual tension between the two. We learned a bit about Dutch’s past, which was nothing we couldn’t have figured out on our own, and she revealed that she’s not into men or women but rather ‘passionate, destructive relationships,’ which Vasiliy referred to as ‘the best kind.’ Oh, you two. So cute.

Shortly after the alert was broadcast, Eichorst invaded the pawn shop with a gaggle of vampire friends, including rocker Gabriel Bolivar – who we hadn’t seen in many weeks. Bolivar infected Nora’s mother in the process, forcing Nora to arm herself with a machete that would’ve made Jason Voorhees jealous, and decapitate her own mom. The decision to be the one to release her mother showed growth for the character, who previously argued against killing an infected Jim – for what that’s worth.

The season’s most expendable character dead, our heroes headed for the hills while the vampires made their way into the basement, Setrakian taking a brief moment to say goodbye to his wife’s heart, before leaving the pawn shop for the very last time. I’m not sure how it was so easy for the vamps to get inside the secured hideout, but I suppose that’s another one of those things – like Eph’s wig – that you’ve just gotta accept and look past.

One thing I want to mention here is that I dig the way this season has been somewhat light on the vampire threat, with many residents of the city having no idea that vampires are even roaming the streets at night. A couple weeks back there was an eerie scene where hooded vamps were prowling around in the darkness without anyone even noticing, and I just love that idea.

Many viewers have complained about this very thing, annoyed that we’ve never really seen how fucked the outside world has become. But you must keep in mind that we’re still in the early stages of this infectious apocalypse, and since vampires can only come out at night, it actually makes total sense that things haven’t yet reached Walking Dead levels of fucked. Give it time. The writers have to leave room for future seasons. We’ll get there.

Elsewhere in the city, Gus held an old acquaintance hostage in an effort to steal his assault weapons, smartly realizing that his survival is dependent on how much ammo he’s got. The side mission led Gus and the man to a shipping dock, where a large container had just been dropped off. After stealing the guns, Gus forced his hostage to open up the shipping container, which was jam packed with angry vampires.

Initially working together to put bullets into as many of their heads as possible, Gus and the man soon turned the guns on each other, as all-out war ensued. Vampire brains exploding left and right, Gus eventually got the upper hand, paving the way for the return of the mysterious Quinlan and his equally mysterious strigoi mercenaries. Quinlan and his men kidnapped Gus, leaving his fate unknown.

As much as I want to see more of him, I love that Quinlan has been kept mostly hidden in the darkness this season, popping up on only two brief occasions thus far. Despite how little we’ve seen of him, he’s already one of the most badass characters on TV, and I think it’s pretty damn smart that they’re holding back on revealing too much about him. Again, nothing wrong with leaving us wanting more.

At the end of the episode, The Master made good on his promise to Eldritch Palmer and gave him what he’s been craving: eternal life. Allowing him to drink from his giant-sized finger, Palmer instantly became less haggard-looking, getting up from his hospital bed and taking a trip outside to enjoy the rainfall. Like Eichorst, Palmer is presumably now one of The Master’s uber vamps, the episode wrapping up one of the season’s main storylines.

‘Last Rites’ admittedly wasn’t the best use of The Strain‘s second-to-last hour of 2014, but it was nevertheless a serviceable time-killer before the finale, with the highlight once again being Setrakian’s flashback scenes. With their hideout destroyed and Eichorst hot on their tail, we can expect next week’s finale to be a perilous one for our beloved heroes, making last night’s episode the proverbial calm before the storm.

We’ll see you back here on HL next Monday for the last Strain recap of the year. Went by pretty damn fast, didn’t it?!