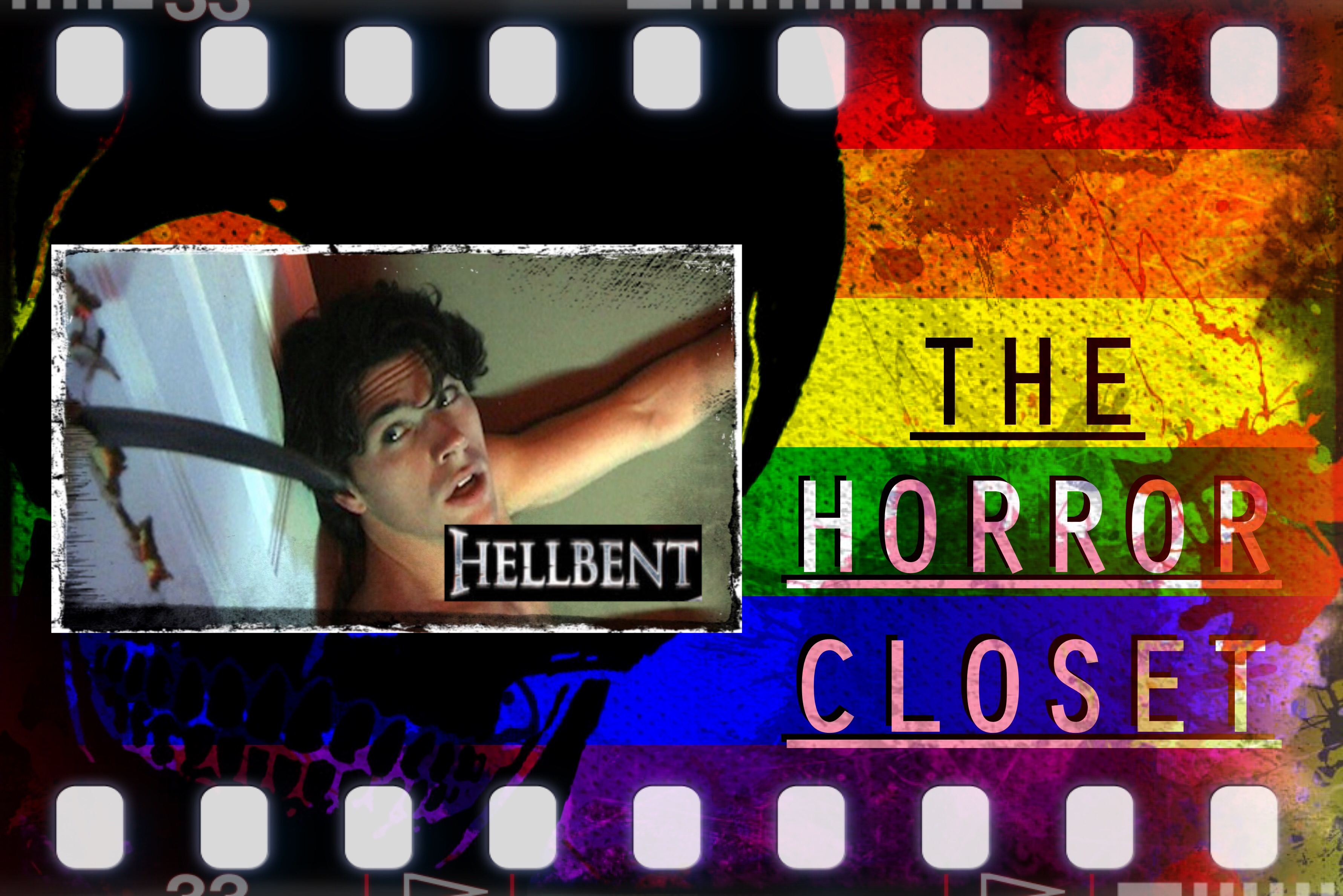 HellBent was touted as the “first gay slasher film”. Released in 2005, it still stands as the first and for now – only gay slasher film of any real merit. It seems like such an easy sell, a group of attractive men head out into insert random, preferably isolated, location and they each get dispatched in various gruesome ways. Maybe the killer is one of their own who was slighted someway in the past and seeks revenge? Or perhaps, it’s just a faceless psycho recently escaped from a nearby mental institution? It should be money in the bank. 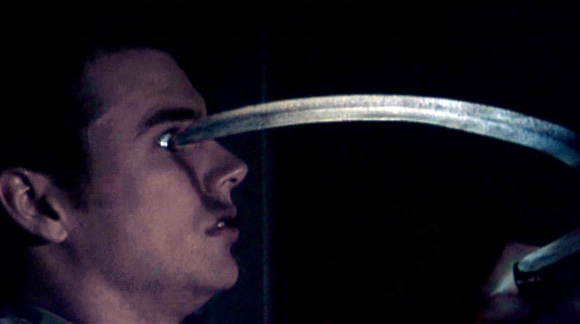 Despite programs such as Will & Grace and more fringe output like Queer as Folk coming to the end of successful television runs, mainstream gay cinema was still relegated to overly self-important Oscar bait (The Hours, Kinsey). Things were progressing, but when a high profile, albeit still extremely low budget indie, gay horror film was announced – it was headline news in many circles. HellBent was the film we needed, entertaining schlock featuring gay characters that wasn’t actually about them being gay. It was time we got our own generic slasher franchise.

Well, it was a nice thought. The film grossed 187k on a budget I can only assume was somewhat north of that. Was it a failure because of the content? Were mainstream horror audiences not ready to except a fright flick centered around a group or homosexual men, or was it just the quality of the movie itself that turned viewers off? Ultimately, I think it may have been a little bit of both.

HellBent takes place on Halloween night in West Hollywood (the gay mecca). A group of friends are planning their evening out among the annual carnival when they decide to take a stroll through a darkened cruising park. You see, just the night before a couple was murdered there by a hulking, shirtless, red devil masked, psycho with a scythe. The group comes across our nameless murderer lurking in the bushes around the park. They taunt him, yelling cat calls, and ultimately get freaked out and run at the reveal of his large…weapon (you, pervert). 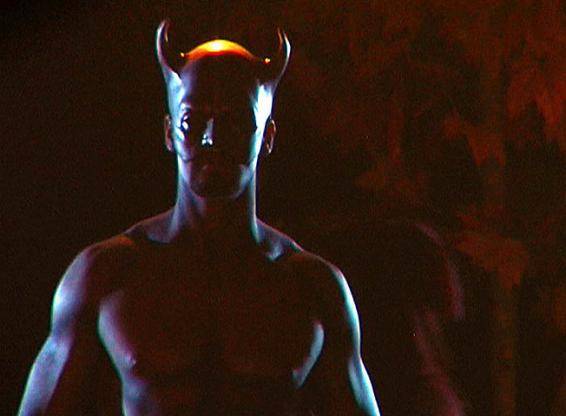 What follows is a completely by the books slasher film. The group is separated amidst the crowded carnival environment, each one chasing their own libido toward one hunky suitor or another. One by one, they each get picked off by having their heads not so politely escorted from their torsos. The Devil is in full on Michael Myers mode, watching them from the distance only to vanish as soon as one of them seems to notice. He moves undetected through the crowds of costumed party goers. He’s never given any back story what-so-ever. It’s a nice change of pace from all the post-Scream slashers we were getting at the time. Everyone of them featuring an overly convoluted monologue upon the killer’s reveal, thus allowing the final girl time to get the upper hand.

Speaking of the “final girl”, for this film we have Eddie (Dylan Fergus). He’s the sweet, shy, moral center of the group. He fits pretty much every “final girl” stereotype, sans virginity. Let’s face it, a twenty-something gay-male virgin in West Hollywood would be a harder pill to swallow than a killer who goes around beheading folks on Halloween. Just sayin’. Eddie is far too concerned with hunting down and winning the affections of bad boy, Jake (Bryan Kirkwood of that horrible The Real World Movie: The Lost Season…remember that?) to notice his friends are dropping like flies. 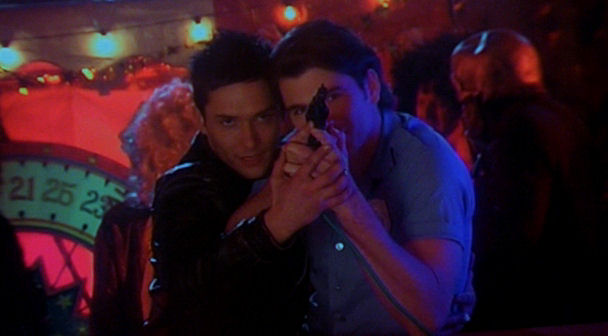 The remaining cast of characters are rounded out by your sexually promiscuous bisexual, conceded attention monger, and hopelessly nerdy dweeb with the hots for the popular jock. They each meet their end in some fairly impressive set-pieces that utilize an effective mix of digital and practical effects. One scene, involving a decapitation in the middle of a crowded dance floor, had me pause and rewind to ask, “How’d they do that?”. The film is never scary per se, but there are enough twisted gore gag punchlines to keep the momentum pushing forward during the relatively short runtime. 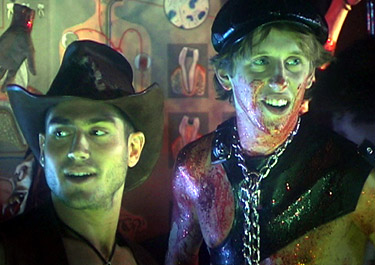 If all of this sounds run of the mill, that’s because it is. Writer/director, Paul Etheredge, has no interest in re-inventing the wheel. He was even quoted in some interviews as not being a fan of the stalk n’ slash genre (Booo). This is through and through an American slasher film with nothing more on its mind than sex, drugs, and blood, and I think that may have been why the film didn’t find its audience at the time. People still expected their queer cinema to be intellectual, thought-provoking pieces that proved to the world homosexuals weren’t just a bunch of godless sex maniacs.

The same year HellBent failed at the box office is the same year Brokeback Mountain became the pinnacle of gay “arthouse” cinema; which should’ve been no surprise with it’s A-list cast, acclaimed director, and multi-million dollar marketing spend. That was the type of film that was being excepted by the movie-going masses, not low budget drivel with no loftier goals other than entertainment.

Times have surely changed since then. Gay cinema contains a multitude of genres now, horror being one of them. However, most gay genre flicks are all about sexy vampires or – sexy something or others. It seems that most gay “B movies” are more intent on showing naked flesh than having said flesh flayed for our twisted enjoyment. I’ve yet to come across a bonafide gay slasher since the release of HellBent. We have mindless, gross out comedies in the vein of American Pie (the truly god-awful yet compulsively watchable Eating Out series), so why not give us some mindless, gross out slasher movies? 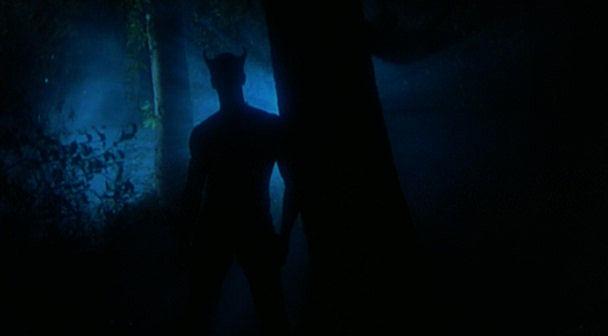 HellBent certainly had the cards stacked against it upon its release. It came out after the slasher revival was already dying down; we had moved on to more cerebral fare like The Others and The Ring. At the end of the day, it might not be remembered years from now, but it’s still an important blip on the map of gay cinema. Personally, I’ll take HellBent’s generic slice and dice formula with boys over another gay Twilight riff any day of the week.

What say you? Are you content with the current state of gay horror cinema?

Stay tuned to The Horror Closet as I’m about to dive head first into the trash pit of mega low budget queer fear flicks in hopes of finding some that don’t blow harder than…well, I’ll just leave it at that. Pray for me. It’s going to be rough.