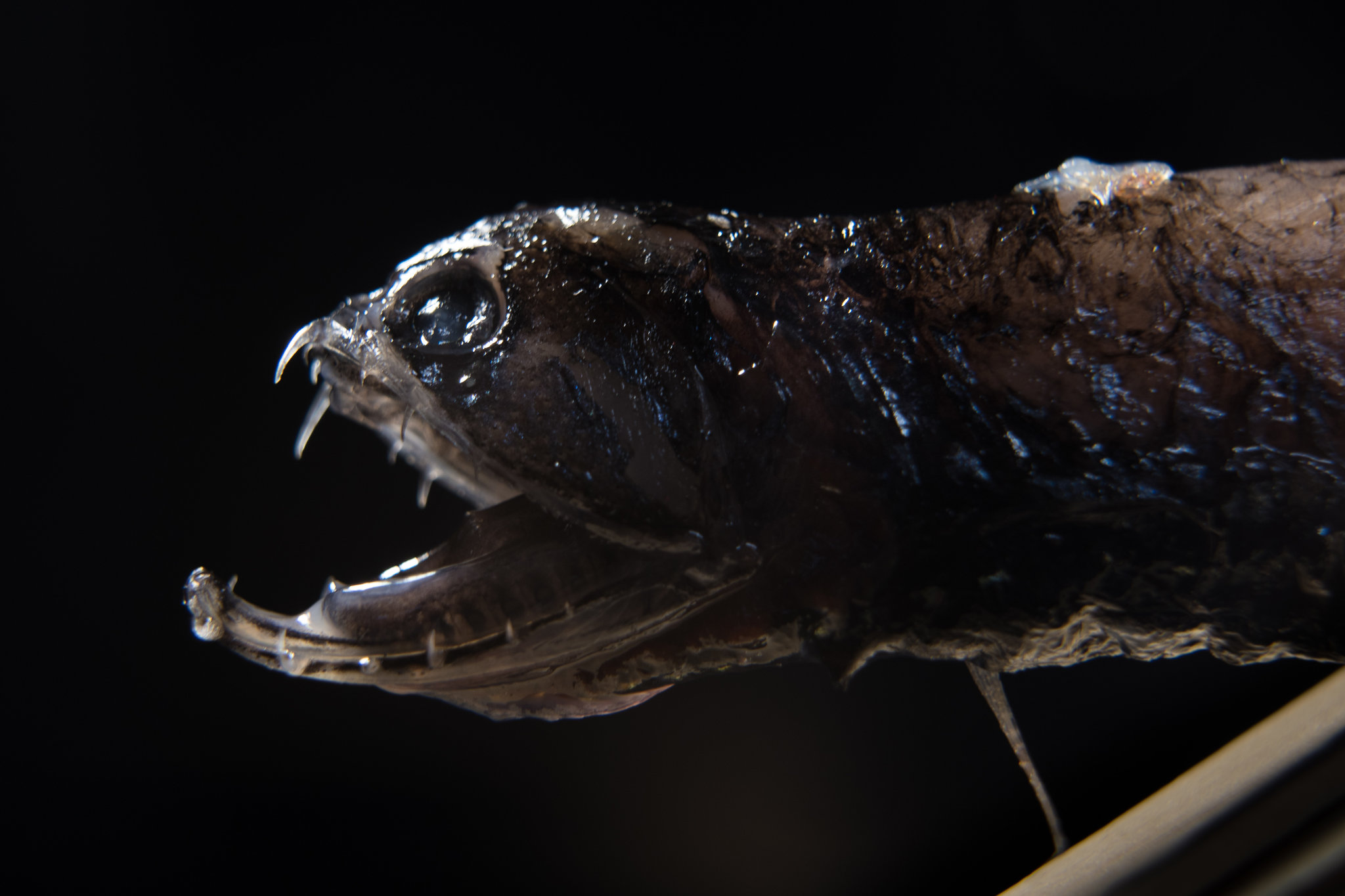 …I’m so delighted we can connect each evening with these electric dispatches. Your photo of our sweet baby Margaret was kindling for my hearth this morning. Today I have heartening news and another spark for that intense conflagration inside me—we finally broke through into the Hadal Zone this past fortnight with a mighty KRAKT. I wish you could have heard the cheers that raised from the ship’s platform as my brave men raised out of the water in our battered vessel after exploration and excavation under those abyssal pressures.

Down there it’s as if the Earth is slowly digesting you. The crew resurrected the 13 disciples of the sea from their cramped metallic coffin. At that time, cheers and clatters arose from the platform like perspiring lead balloons popping above our heads. The men are leaden with anticipation for what will come next for our undaunted deep-sea mining operation.

I can’t say I differ in their sedimenting predilections. They love to salt all victories in our year-long expedition with the bitter and the brine. The 114 brave souls in the leaky hull of the Porta sank to the bottom of our drinks like claggy silt that night, each glass filled with ghostly plumes of whisky and gin. We were certifiably spifflicated all last weekend before we returned to the seabed again. Just as our gigantic robotic companions do at the bottom of the great Pacific, we crushed, pulverized, and pumped copious amounts of food and liquids into our empty bodies that night.

It was a delight to see your brother George put on a jovial skiffle across the common area with the sonar violin he bought at a music shop in Checagou. He noted one night as we talked about the home that the Japanese man that sold him the instrument said its music could slay the winged snake or woo Eve in the Garden. “Take your pick, sir,” he said as he dredged the credits towards him on the wooden storefront table. “You never know what gates you might open.”

I have myself been ankling back to you in Santa Reina on high winds. I heard the southern coast of California has seen another month of flooding and rainfall like last year. Please be safe as I have also heard reports of more water raiding to the east of you. Let’s plan times to read Mohr’s The Voyage when I return. The translation your father gifted me one Christmas before he passed this mortal coil was a more faithful version than any I have read before and each scene was as painterly as a Pacific Ocean sunset, all plump oranges, bruised purples, and burnt crimson. It was a setting befitting a romantic night diving into each other’s arms.

Don’t worry, everything’s Jake on the ship. Love to all.

My sincerest apologies, I couldn’t send my usual message yesterday. There was an incident on the ship yesterday that I need to take care of first and calm my nerves with a drag on a cigarette. There were many calls of “butt me!” that afternoon.

A growing concern floats through me this week. Some of the crew that came up from the Hadal Zone are experiencing some seasickness post-bathysphere dive as we ply across the sea to home. Nothing to worry about at the moment, dearest! Only two men have vomited a white-and-black slurry substance at night before bed, but the ship’s doctor Elias Carthage is examining them in isolation in the medical bay.

Others on the ship have likened these two to the odd dewdroppers of the group, real laggards when you need them to perform their best. Perhaps they are trying to get out of more work on the ship as they ache for the embrace of home. I will talk to you tomorrow since I am still the Captain of this rabble-rousing vessel after all. I need to prepare for our arrival in about two weeks’ time. Best wishes to you and sweet baby Molly.

I had a nightmare last night of the seabed not as a dark expanse of sand, but as a jagged and starlit landscape like a network of gaseous and liquid nebulae jutting up from the bottom floor of the Pacific. I came upon an alien metropolis as the canyons sliced miles deep and hot springs billowed through fissures in the rock. Briny pools dropped down into dark lakes and I saw amphipods the size of cars and gigantic gelatinous snailfish lit through their translucent somas. The inner organs looked like flickering street lights.

I do not know how I was swimming at those depths. It was as though my skeleton was ossified like some human and cusk-eel hybrid. My skin was deformed and reformed around itself with no issues from the gigantic pressures at those depths. I gazed at my reflection in a sunken piece of glass-like metal and I looked absolutely aberrant. I was a commingling of man and invertebrate sinking into the black and burbling hellscape below my tentacled toes. A lambent gate growing in intensity appeared at the bottom of the seabed and eventually enveloped my entire vision before I woke up drenched in salt water.

My deepest devotion to you keeps my sanity pulling toward your call in the east. I don’t mean to alarm you. I must chronicle what I have witnessed during this harrowing weekend past. Clustered pustules that grow white or inky black are growing along the spines of 13 of the men that traveled to the Hadal Zone. They keep aerating themselves and pop as if they are under the immense pressure of an elephant walking over kelp pneumatocysts.

Our doctor said other hardened, obelisk-shaped nodes have also appeared on the heads of some men as well. Our doctor also has these strange symptoms now and must be quarantined. I hope to douse any simmering panic spreading across the rest of the crew now. Some have left the ship in small boats and prefer to brave the open waters than the disease that has fallen on us like a Stygian plume. Please hug our sweet baby Maccy for me.

I have not heard from the 13 men or our doctor in the quarantined medical bay yet today. It’s been 24 hours of no communication and we may send someone in there with a heavy diving suit. I am recommending we stay clear of the area until we dock.

We came across a massive Chinese deep-sea mining ship abandoned near Johnston Atoll. It bobbed on the top of the sea like an open wound. A buzzing swarm of large flies hovered over the ship. I open up my supply box next to the command center of our ship only to see wet bags of fleshy meat wearing Chinese government-issued uniforms amongst intermittent fires on the deck of their ship.

The men resembled pellucid, human-like tube worms and although I couldn’t smell that scene in the deep recesses of my nostrils the bottom cliff face of my face crumbled as if the stench of the scene was molesting the airspace of my vessel. We did consider boarding for a moment, but decided to steer wide for fear of any violent reprisals from the remaining crew or holding any more horrors that we don’t need to take on as a unit of 94 men now.

Damn. I’ve been experiencing severe headaches in the evening hours and an unabating cough. I vomited into the sea this morning after breakfast and before it could hit the roiling waves the shaggy-legged thing I coughed up sprouted wings and dove its shale-colored head toward the approaching coastline.

It happened again. A Nightmare consumed me. This time a sediment plume constricted my vision as I was pulled toward that luminous Hadal Gate. I looked at my reflection again and saw no eyes and sea spiders crawled out of the holes like a dark and sickening blast of volcanic ash. A gray-blue humanoid form with tessellating skin appeared in front of the gate with an instrument in its hands. A sharp prick in my neck and it was a wash of color and lights streaking into infinity. Tell Macc I love her.

I wish we still had a doctor on this ship. I have some of those hard black obelisks growing on my skin now. They pulse with light and ooze that same black-and-white substance I’ve been coughing up since I started having those headaches. I guess I’m taking a new shape now. My mind feels like it’s adrift at sea with swells that are as deep as those undersea caverns. It’s cold down there and there’s gravitational pressure mounting an assault on my changing skin.

Good morning. I told your brother, George, he needs to listen to me. So many times I rang this warning over his head like a bell and he whimpered and made poor excuses like a tiny animal. I eventually cracked him wide open like an oyster and gorged on the juicy meat inside. The taste was surprisingly sweet. Remember, I’m the Captain after all.

He opened the door to the sick bay yesterday for me. Just following orders. Forgot to mention it, but I’ve been busy with some fatty, rebellious streaks across the 54 meat bags on this damned ship. Your brother is feeling better now after our morning quarrel. All is well. Send my love to our little Macrouridae for me. Father is almost home…

We’re almost home. I think I counted the amount of meat bags at around 13 now. My own disciples are here to spread the gospel for the Hadalians. There’s water seeping out of my ears together, but at least the pressure is now relieved. I look forward to kissing and touching you. Let’s take a trip when I return and get away for a while. You always liked what is left of Colorado after the droughts and firestorms. Maybe a bit dry for me, but we all have to make sacrifices now.

It feels so good to be home now, Anna. I feel like a resurrected man. We will be such a mirthful family now. Our friend visited us from the Hadal Gate while you slept and let me know what we can expect by Christmas. You will feel like this is home soon as well, Anna. We opened the gate to a new and exciting world. Once you’ve woken up you will see our second child will be so beautiful. I want to make sure you’re awake for her birth. I hope she has deep blue eyes, but she may not have any like her sister does now. Sacrifices just had to be made. I’m the Captain after all.

Depths of Love to You–
THOMAS·MARTIN·BALSAS