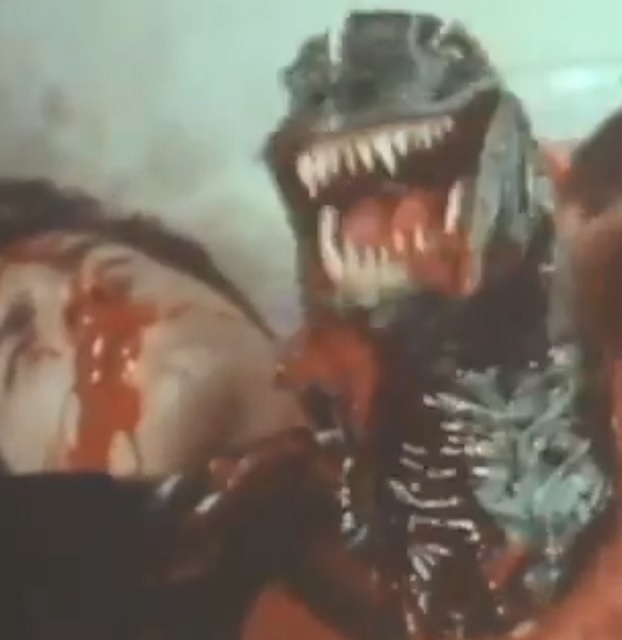 Last night my friend Zach tweeted out a link to a short film called Horror Brunch!!!, made in the 1980s by a guy named Rik Carter. I had never seen the short and I had certainly never heard the name Rik Carter before, but the gory short was the absolute personification of everything I love about 80s horror, and so I was eager to learn more about the filmmaker, and see if he had done anything else, either back then or in the years since.

I was pleasantly surprised to discover in my travels around the internet that he had in fact made a couple other short films throughout the 80s, which similarly tapped into the sheer awesomeness of a truly glorious decade.

My attempts to get in touch with Carter on social media failed, which is a bummer because I was hoping to conduct an interview with him, but in lieu of that I wanted to share with you guys the three shorts he made back in the 80s, which I think you’re going to dig. And after watching them, I trust you’ll be asking yourself the same question I am right about now…

Why the hell had I never heard the name Rik Carter before?!

First up is I Dare Ya, which was filmed in only one day and is Carter’s very first short. Made in 1987, the 5-minute film stars three kids from the local theater group his mom ran back then, and centers on a childhood dare that’s sure to be familiar to most of you reading this; ring the creepy old dude in the neighborhood’s doorbell, and then run away. Carter puts a twisted little twist on the proceedings for this fun short, which plays out like a really well-done episode of Goosebumps.

Carter’s second short was the aforementioned film Horror Brunch!!!, which won several awards and was on shown on USA Network’s late-night TV program Night Flight. Starting off with a seemingly ordinary brunch session, the short quickly takes a turn for the horrific when various utensils and food products go on the attack, savagely murdering the eaters. All sorts of incredible practical effects are on display throughout, and iconic characters like Norman Bates and Leatherface even pop up toward the end. If you love gory 80s slasher flicks, you absolutely need to watch this one, as it’s essentially a blood-soaked love letter to the era.

Carter wanted to restrict himself for his third short film and that’s precisely what he did with Closet Case, centering on the simple premise of an old man trapped in a closet, with a monster on the loose outside. Very much evoking the feeling of a Tales from the Darkside episode, Closet Case features an original monster creation by Carter, which will have you yearning for the days when movie monsters looked like this, rather than computer generated abominations.

In addition to being a filmmaker, Carter was also a special effects makeup artist back in the 80s, which would explain the impressive effects on display in these shorts. He actually worked on the makeup department of A Nightmare on Elm Street 4: The Dream Master, made in 1988, and was also on the makeup crew for the spin-off TV series Freddy’s Nightmares.

Though he ended up making a feature film called Dark Crimes back in 2006, Carter apparently no longer directs or does makeup effects, and he’s spent the last several years working as a camera operator on various productions. That’s just about all I was able to uncover about his career, mostly courtesy of his IMDb page.

If you loved these shorts as much as I did, I encourage you to check out Carter’s YouTube channel, which has some behind the scenes making-of videos and various other goodies.

Rik, if you ever read this, I absolutely love your nostalgia-inducing work and would love to chat. My e-mail is MORTIS45@AOL.COM (yea, I still use AOL), if you’re ever feeling up for an interview!