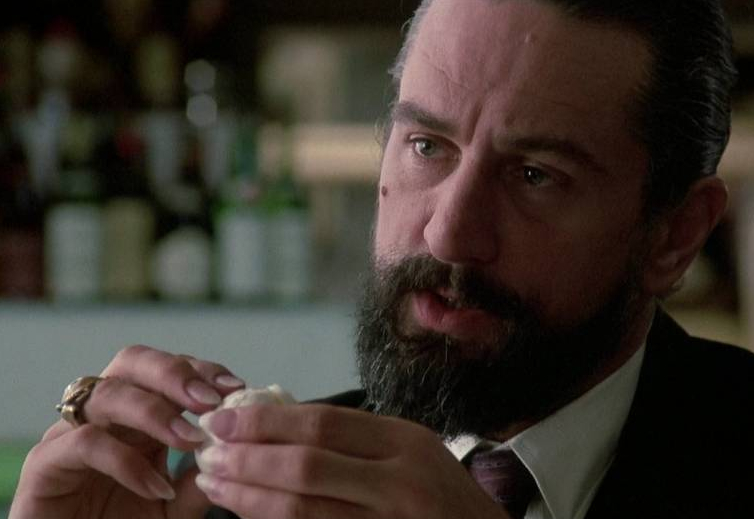 It’s time for another very real phobia and the movie scenes or characters that could cause sufferers to have sleepless nights!

This week it’s the turn of Satanophobia … Here is a little online info that explains more:

When one thinks of Satan, we immediately visualise a scary and dark image of a person surrounded by fire, with horns, spiky tail, carrying a spear or trident, who looms out of darkness and possesses an evil laugh or grin. For kids especially, this image is extremely scary and this fear as a child could be instilled and may manifest in adults as satanophobia or the extreme fear of Satan.

This fear could be also associated with the fear of demons, and the fear of hell. These people are scared of burning in hell for all eternity and being tortured.

Whoa! … Well, movies rarely portray the Devil/Satan as a big red guy with horns but he certainly does show up from time to time and that’s never good news for the characters involved. Remove some clothing, things are about to get HOT!

EOD is a bit of a mess but Arnold delivers a surprisingly solid performance as a retired cop who tries to stop Satan (Gabriel Byrne), having lots of sex before midnight on New Years Eve 99′.

Byrne could act sinister and charming in his sleep and is by far the best thing in the movie, even after he turns into a HUGE winged beast!

Classic Evil Quote: “How do you expect to defeat me when you are but a man, and I am forever?”

Mr. Frost (Jeff Goldblum), is a serial killer who claims he is actually Satan and has returned to earth in an attempt to make people believe in him again. The answer to that mystery is left open to interpretation but what I DO know is that Goldblum is one strange dude in real life as well. Being the Devil would explain a lot!

Classic Evil Quote: “The price of action is colossal, and we are going to hell”

The Devil (Terence Stamp), is in this movie for about 50 seconds but COME ON … It’s Terence Stamp wearing a tailored suit, sitting in the back of a vintage Rolls Royce holding a skull!

You can’t get much more evil and cool than that.

Despite being written by M. Night Shyamalan, Devil is actually a fairly impressive and intense little movie. This time the Devil arrives on earth in the form of a sweet little old lady who wants to claim the soul of that guy from Prometheus while they ride in an elevator.

Honestly, it’s better than it sounds.

Classic Evil quote: “You think this will make you good? You’re not good”

Pacino gets to shout a lot, act crazy, seduce women and own every scene he is in. His performance as John Milton/Satan is fantastic, just a shame the rest of the film is a bit dull.

Oh, except for the part where Charlize Theron slices her own throat. That I liked.

Mad Mel Gibson has had a crazy few years but the guy can still direct a damn fine film when he wants to. Whatever your religious beliefs, The Passion is a powerful and at times very difficult to watch movie experience.

Gibson decided to give Satan (Rosalinda Celentano), a unique androgynous appearance and if that wasn’t creepy enough there is also that hairy and old baby … thing.

The baby bothers me, a lot!

Classic Evil Quote: “Do you really believe that one man can bear the full burden of sin?”

Long before he decided to move to New Zealand and protect Hobbits, Viggo Mortensen could be found portraying Lucifer/Satan in this underrated slice of entertaining horror from the mid 90s.

He gets to squat on walls, snarl like an animal and lick Christopher Walken’s face. Some people have all the luck.

Classic Evil Quote: “How I loved listening to your sweet prayers every night. And then you’d jump in your bed, so afraid I was under there. And I was!”

Let’s be honest, Peter Stormare is a naturally terrifying guy, so put him in a crisp white suit, cover his feet in thick black slime and the end result is a classic on-screen Satan.

He’s also the second Devil on this list who wanted to mess with/kill Keanu Reeves! Maybe something we should be keeping an eye on?

Classic Evil Quote: “Sonny, I’ve got a whole theme park of red delights for you”

Take a large portion of Tim Curry, add a generous amount of Rob Bottin makeup and prosthetics and allow to bake for about 5 hours. The end result is a truly classic visual representation of the Devil, or in this case ‘Darkness’ …

Classic Evil Quote: “You think you have won! What is light without dark? What are you without me? I am part of you all. You can never defeat me. We are brothers eternal”

If the thought of your soul inevitably being taken by the Devil fills you with terror then Angel Heart is THE movie to avoid. In a time before Mickey Rourke’s face started to melt and De Niro still cared about which roles he would take, they came together to star in this incredibly dark and unnerving horror classic.

De Niro plays the part of Louis Cyphre (Lucifer), with perfect subtlety and menace, never getting hammy or needlessly resorting to cheap tricks and effects. Well, EXCEPT for the glowing eyes at the end, but by that point a little nod and wink to the audience was well deserved. A brilliant movie and genuinely terrifying at times.

Classic Evil Quote: “If I had cloven hooves and a pointed tail would you be more convinced?”