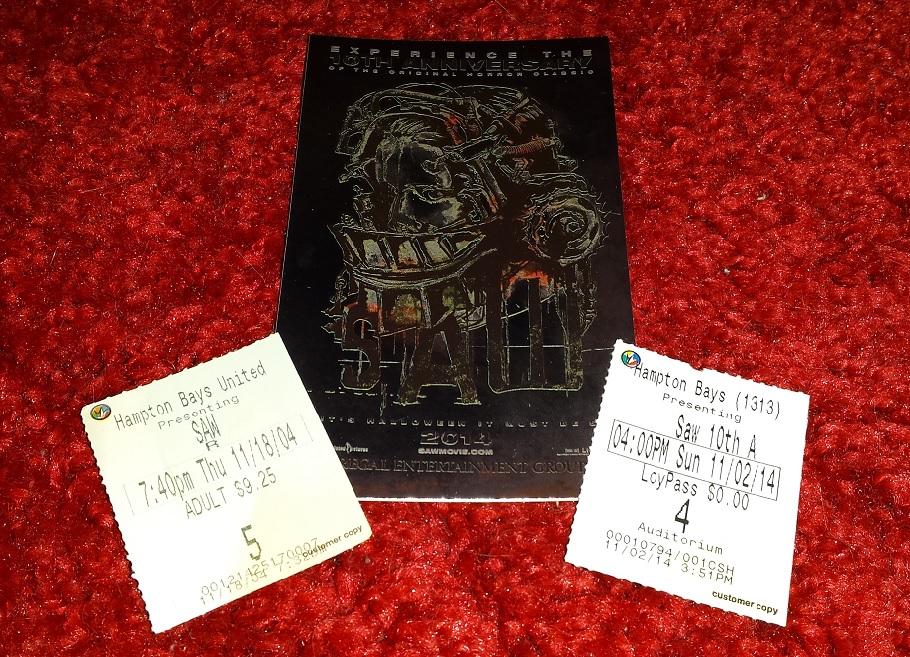 For the first time in four years, this year’s Halloween season brought a Saw film to the big screen, though it was of course a re-release of the original rather than a sequel or reboot – a reboot likely isn’t far off, however.

Yes, it has already been ten years since that guy from Princess Bride and that guy who wrote Saw found themselves locked in a filthy bathroom, their night of terror giving birth to a new horror icon as well as a hit franchise.

As I’m sure you’ve heard, Saw‘s Halloween re-release didn’t exactly compel many fans to spend more money on a movie they’re already paid to see and then likely paid again to own, and the box office take for the weekend topped off at less than a million dollars.

Though many are considering this a big time ‘flop,’ that’s a fairly silly thing to say, considering we’re talking about a re-release of a movie from ten years ago. The lack of fan interest is surely a disappointment to Lionsgate, but nevertheless they made more money off a low-budget movie that has already made a ton of money, so I doubt anyone’s crying right now.

I was one of the few who was at least remotely excited about Saw coming back to theaters, as I’m a fan of the film and I think it’s always fun to revisit older movies on the big screen. Plus, my rewards card had earned me a free ticket anyway, and to say I had nothing better to do yesterday would be an understatement.

So I headed to my local theater last night and cashed in my free ticket. And after being handed that impossible to photograph mini-poster seen up above, the games once again began…

I guess the same can be said about most horror movies, but Saw in particular is quite a polarizing film within the community. Some hate it, and the entire franchise it spawned, while others consider it a high point of the last decade of the genre’s output. I fall into the latter group, and have been defending James Wan’s gory debut ever since I first experienced it, back in 2004.

Though the label does accurately describe many films that came in the wake of Saw, it most definitely does not describe Saw. In fact, if there’s a theatrically-released horror movie in the past decade that has more of a story than any other it’s probably Saw, which is one of the most story-driven films, and franchises, in the entire genre’s history.

There’s truly nothing mindless about it, which is why the label it often garners is so damn infuriating.

An intricate puzzle that comes together piece by bloody piece, Saw is as much fun to watch now as it was ten years ago, and I found myself forgetting so many of those little details that form the complete whole of the film. The true hallmark of a good movie is that it can be re-watched over and over again without losing any of its luster, and though Saw is very much a twist-driven movie, it impressively holds up all these years later. Though I knew it was coming, for example, I still got chills when Jigsaw stood up off that bathroom floor.

And yes, they were multiplying.

One of the most impressive things about the film, looking back, is just how much it brought to the genre. I can count the number of bonafide horror ‘icons’ the genre has given us in the past decade on two hands, and a good portion of those came exclusively from the original Saw. Jigsaw, Billy the Puppet and Amanda were all introduced in one fell swoop, along with a host of iconic images that are forever engrained in the minds of horror fans – from the pig mask to the reverse bear trap. Pretty incredible, when you think about it.

Of course, there is a nagging problem with Saw, which is as much of an issue now as it was 10 years ago. The acting, particularly from the two leads, is serviceable at best and cringe-inducing at worst. Cary Elwes is a fine actor but he’s painfully bad at several points throughout, resulting in intense and horrifying moments coming off fairly comical and goofy. I’d almost like to see the exact same movie remade with better acting, because the poor performances definitely have a negative impact on the overall feel of the film.

As for the franchise as a whole, I appreciate and respect it as much as I do Wan’s original. The sequels aren’t all good, I’ll admit that, but the fact that each new one continued the story laid out in the original, even AFTER the early death of Jigsaw, is pretty impressive and worth respecting. For seven years, I loved the annual tradition of watching that story grow (and having a front row seat to some truly gruesome torture), and so I more than forgive any minor issues I have with those sequels.

While it’s true that any of us could watch Saw in the comfort of our own homes, likely free of charge, I’m glad Lionsgate re-released it, as it encouraged me to finally revisit the film. And though most of the horror community doesn’t seem to appreciate the revival, I for one do. It’s refreshing to see a studio re-release a hit film rather than remake it, and I’m always happy to support them when they do.

After all, don’t we all say things like ‘ugh, why don’t they just re-release the original?’ whenever upcoming remakes are announced? Sadly, this past weekend’s box office results are a shining example of why they don’t.