First, before I get into the review, let me just say how great it feels to come back and write again. Long story short, some things in my private life have kept me so busy, I haven’t had time to do what I love. My comeback will be slow, but I have not yet begun to write. Thank you all for your patience. Now, on with the show…… 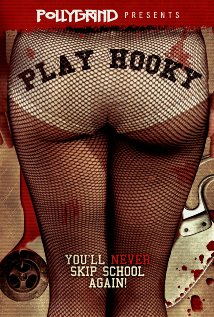 I’ll just come right out and say it. Found footage horror is a dead horse that has been beaten more times than Rocky Balboa. From the marketing ads claiming that everything we’re about to see is real all the way down to those night vision “audience reaction” trailers. It’s horror made dirt cheap in order to turn a heavy profit. I have nothing against making money. God knows I don’t think any of us do. But there isn’t much left for the genre to say.

That is, until I saw Play Hooky. The film, the first under the new PollyGrind Presents label from Wild Eye Releasing, is the first feature for writer/director Frank S. Petrilli. Shot in seven days with a camera purchased at Best Buy for under two hundred dollars, it won the award for “Most Innovative Film” at the PollyGrind Underground Film Festival of Las Vegas in 2012.

The film itself revolves around a group of friends who decide to cut school and party in an abandoned mental hospital. The hospital itself is no stranger to mischievous squatters as tales of witchcraft and demonic hauntings have been passed down throughout the small town. Little do they know that something far more sinister than ghost stories and a bad trip are waiting for them.

This movie really has a lot going for it. One of the most intriguing things to me about Play Hooky was the concept of the camera being hidden on a character’s person. This gives the viewer a first person experience, allowing us to not just be a voyeur, but a participant, in the terror. This is particularly effective during the film’s climax, where the true horrors inside the hospital are brought out into the light.

The acting is top notch for an indie feature with quite literally no budget. My hat is off to the lovely and talented Becky Byers as the lead character Megan, as well as Bob Waters, whose monologue in the post credit scene is award worthy.

Although the found footage feel might turn some away, Play Hooky is a slow burning concept with a fast paced, frightening climax that will keep you wondering long after the credits are done rolling.