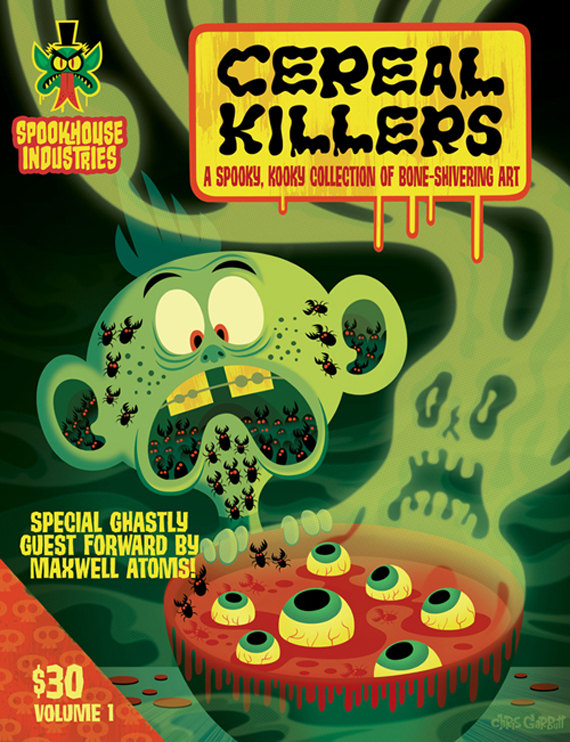 ‘If there’s a common bond that ties our generation together, it’s the shared magic of waking up on a Saturday morning and watching six hours of cartoons while eating bowl after bowl of sugary cereal, then going to bed and having hideous sugar-induced nightmares.’

This is the first thing you’ll read when you open up Spookhouse Industries’ brand spankin’ new book Cereal Killers: A Spooky, Kooky Collection of Bone-Shivering Art, courtesy of an introduction written by Grim Adventures of Billy & Mandy creator, Maxwell Atoms.

It’s a fitting intro from a fitting person, paving the way for 74 full-color illustrations loaded with blood, guts, monsters, nostalgia and, of course, enough sugary goodness to rot your goddamn teeth right out of your goddamn head. This book is, essentially, those sugar-induced nightmares come to glorious, colorful life.

As Maxwell states in the intro, there is indeed a serious sense of childhood nostalgia attached to cereal, as it’s oftentimes the first thing we eat that we actually pay attention to and therefore remember. Fish sticks and mom’s meatloaf were good and all, but they didn’t come packaged in eye-catching boxes loaded with delicious imagery, nor were mascots and ‘SPECIAL PRIZES!’ a part of the meal.

Actually, I fucking LOATHED fish sticks, but that’s another story for another day.

Where was I? Oh right. Cereal. Nostalgia.

For horror fans like ourselves, there’s no cereal that’s quite as nostalgia-inducing as the General Mills ‘monster cereals,’ including the likes of Boo Berry, Franken Berry, Count Chocula, Yummy Mummy and Fruit Brute. And that’s why we all flip our shit when they return to store shelves every year, inundating our social media profiles with endless pictures of the boxes, the cereal and the colorful milk that’s left behind.

To boil it down to its essence, those monster cereals are a fusion of two of the favorite things of nearly every single horror fan on this planet; monsters and nostalgia. Horror fans thrive on nostalgia perhaps more than any other fans, and there’s just something about drinking pink milk, even at 30 years old, that brings all those fantastic memories flooding right back. For a moment in time, all feels right with the world, and that’s what Cereal Killers is all about. 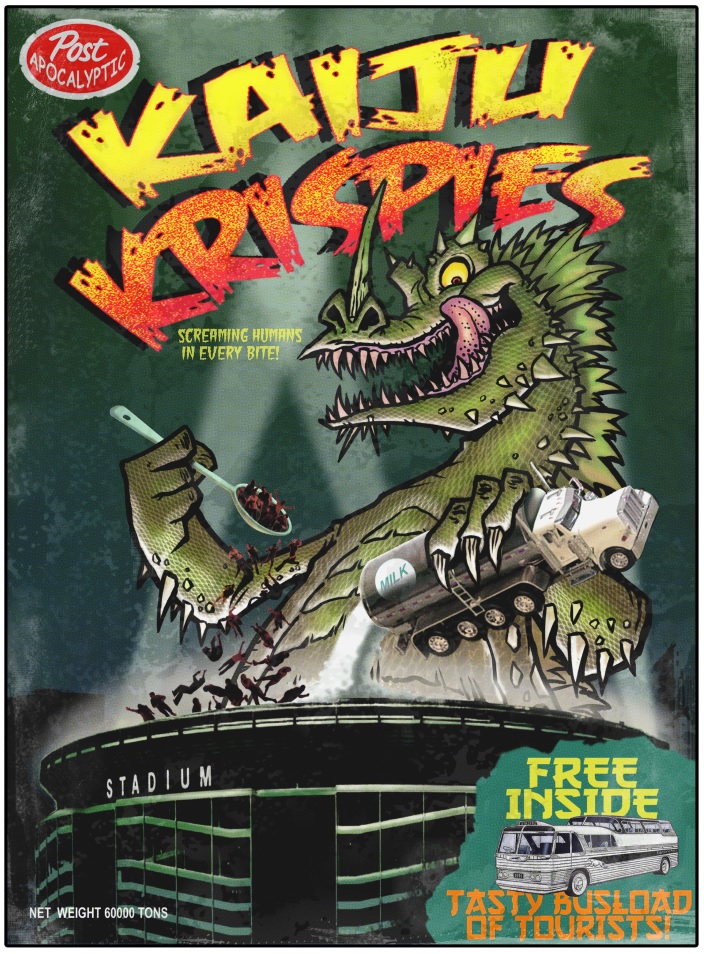 Indeed, while flipping through the pages of the book, all else is magically forgotten, including those bills you can’t afford to pay, the rent that’s due tomorrow and the Ebola that’s soon going to KILL US ALL. Reverting you back to your childhood self, where worries were a thing of the distant future, Cereal Killers is just plain fun, jam packed with the sorts of awesome treats that you once had to dig through cereal boxes to find.

Some of the top artists and animators in the world contributed pieces to the book, including Madballs designer James Groman, who is a personal hero of mine. His contribution, titled ‘Kaiju Krispies’ is in many ways the perfect representation of the book as a whole, as it’s a clever spoof of a popular cereal brand and fun to both look at and read – a ‘tasty busload of tourists’ is listed on the box as the special prize.

As with any collection of this sort, there are weak points throughout, mostly when the art doesn’t look like it could be an actual cereal, though there are only a very select few bad apples in this bunch. The awesome far outweighs the not-so-awesome, in other words.

If there’s any real downside to this enjoyably twisted ‘coffin table book’ it’s that creator Von Kreep was beat to the punch by a series of trading cards that came out a couple years back, which were also titled Cereal Killers. Truth be told, the concept lends itself better to Wacky Packages-style trading cards than it does a book, as it’s mostly just images, and it’s admittedly hard to fully appreciate something that you’ve already seen done before. 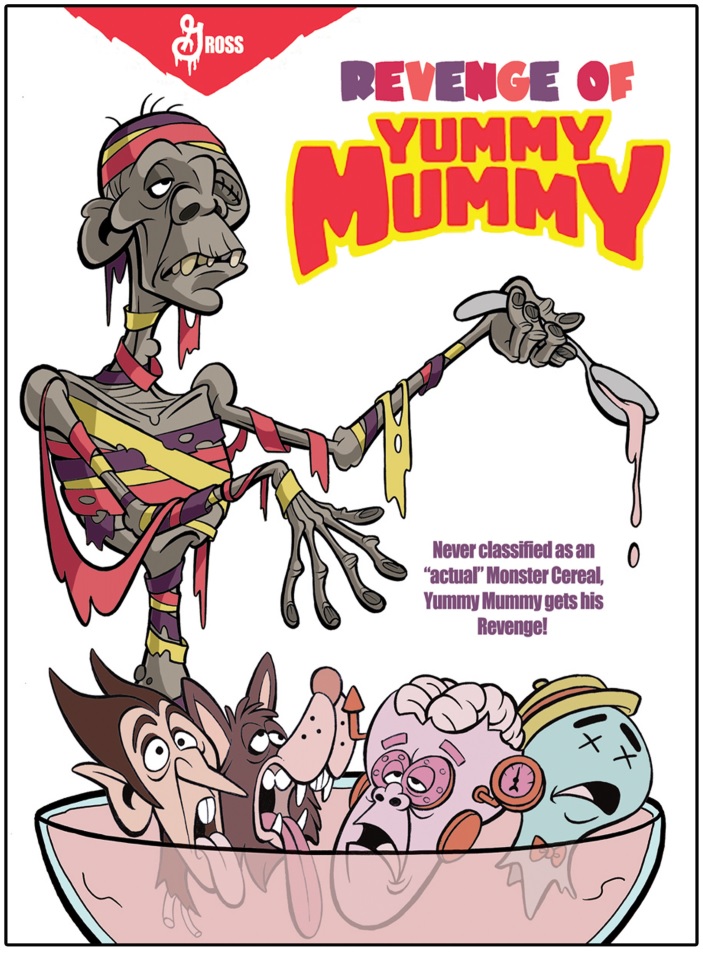 That said, it’s worth noting that Von Kreep began putting this project together before the unrelated Cereal Killers trading cards came out, so this appears to simply be a matter of unfortunate timing and coincidence.

But hey, there’s enough room in the world for two products called Cereal Killers, and who’s really going to complain about MORE fan-made monster cereals being unleashed upon the world? Someone not worth listening to or hanging around, says I.

Despite the fact that it’s been done before, Cereal Killers (the book) is a deliciously entertaining read, the kind of book that should be on the coffee tables of every person whose eyes light up at the sight of Boo, Frank and the Count. The world is truly a better place with this book in it, and it’s sure to brighten up your hospital bed when the aforementioned Ebola finally grabs a hold of you and turns your extremities black.

May God have mercy on your soul.

Now through Halloween, you can grab Cereal Killers over on Etsy for just $30. The magazine-sized trade paperback spans 80 pages, and is in full color (inside and out) with lamination.

Grab the nearest Tetanus-infected spoon, pour yourself a bowl of spoiled milk and enjoy!