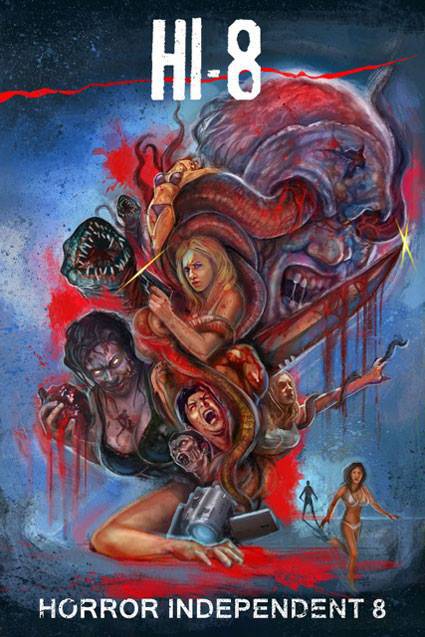 The shot on video (SOV) format has been a tried and true staple of the horror community ever since the days of “Boardinghouse“. From time to time, a movie comes around that claims to be a “throwback” or an “homage” to these days of horror old. None more so than HI-8. A concept where eight veteran horror film makers were asked to conceptualize, write & shoot (on video) a short horror film with little to no budget. The results are staggering. Everything from schlock and comedy to gross out horror and creature features, this flick has something for everyone. As a self professed lover of all things VHS, I must quickly shout out the good people at Wild Eye Releasing for sending me a VHS copy of the film.

In true anthology fashion, we start of with a wraparound piece that will continue throughout the course of the movie. The aptly titled “No Budget Films Presents” offers a look at three people trying to shoot a horror film. We will pop back in and out on their progress while we watch the true meat of the movie.

The first short, “Switchblade Insane”, focuses on a loving housewife who discovers her husband’s dirty little secret and decides to join in on the fun. But is everything as it seems? This was a great way to start the shorts and offers everything one expects from old school horror. Namely blood and T&A.

“A Very Bad Situation” sees a shower of meteorites falling to Earth, turning people into hideous creatures. This one shows off its lack of budget, but not for the better. While it does feature a great effect toward the end, it felt somewhat rushed.

“The Tape” focuses on a man who becomes obsessed with a SOV snuff film he finds while cleaning out a video store. His determination to find the creator ends with disastrous results. The gore is fake and fun, but in my opinion runs a little long.

“Gang Them Style” is literally pop culture in a blender. A comedy laden short with a one-liner spouting action hero trying to rescue his grandma from zombies in a nursing home, feels like it could actually be a feature if done properly. The most fun out of all of the films, it wears its love for films like “They Live” right on its bloody sleeve.

The remaining shorts “Genre Bending”, a real WTF rape/revenge parody, “The Request”, about a radio DJ and his back from the dead bride, “Thicker Than Water” about the things we do for love & “The Scout” about a director looking for a location for his next flick, are all somewhat mediocre for one reason or another.

While it does drag a little toward the end, HI-8 pulls out all the stops in offering us a great look back at the art of SOV horror. Not to mention a great showcase for some indie horror filmmakers who some may just be discovering for the first time. All in all, a fun film and a hell of a ride for those nostalgia buffs who miss the days of the video store.