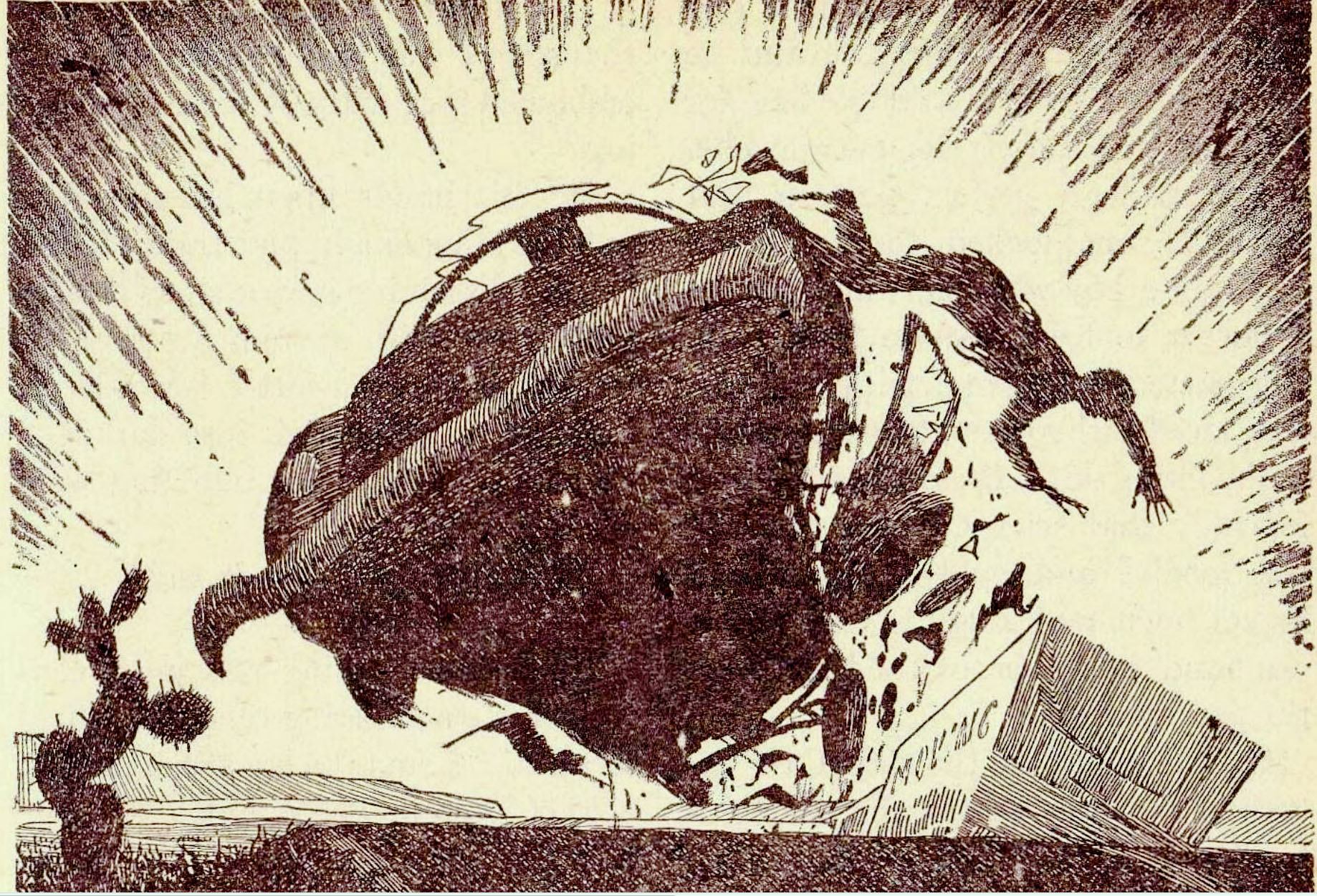 Car crashes can happen easily. A simple matter of not following the lanes of the road will do it. But in a world where everyone is forced to stay in their lane, one man tries to veer off the path.

“The Exile,” by Alfred Copper (published in Astounding Science Fiction, May 1952), is set eight years into the future–1960–and Earth is a wreck. On every continent there are revolutions, tyrants, and purge trials. America has become a fascist state where many classic books and pieces of Russian music are “Red Banned.” And those who work for the government are especially oppressed. Cain, a fighter pilot, stressed by a life of incessant scrutiny, speeds recklessly down a road one foggy night and ends in a horrible crash.

But even his death is BANNED. They pry Cain’s gurgling, bloody pulp of a body from the wreckage and slowly rebuild him, replacing his face with plastic and his sunken chest with bellows, his hands with metal claws, and his eyes and ears with cameras and microphones. Eventually he awakens to a low-resolution hell:

“He cried out in fear and the sound was like that of a cheap loud-speaker overloading, harsh, incoherent, and fearfully loud. He heard running feet, their beat tinny and unreal.“

Coppel does an amazing job at describing the claustrophobic feeling of being trapped in a minimally functional robotic body.

His Doctor, Ben Isaac, informs Cain that he is too valuable a pilot to die. He’s the only one who can fly the Moonshot, a rocket that is to be the first to reach the moon. Not only because Cain’s superior skill as a pilot, but also with his new robot body he will be able to take the extreme g-forces of space flight.

Although going to the moon had always been Cain’s dream, Cain refuses to pilot the Moonshot. “Not like this,” he says. Isaac tries a couple strategies to convince him: first by giving Cain a forbidden, red-banned book, then by appealing to his sense of National pride; “Would you rather the Russkies did it?” But it is only when Isaac threatens to bring in his wife that Cain acquiesces. He would do anything to prevent his wife from seeing him in this state.

Cain is inserted into the Moonshot like a piece of equipment, and shot off to the moon at speeds that would kill a normal man. The ship is mostly automated, and Cain’s job is to correct any errors the ship makes (kind of like following the painted lines of a desert road at night). Just as Cain is rounding the moon, the ship does in fact make a mistake setting the trajectory askew. Cain sees his chance and takes it. By doing nothing, he allows the ship to stay off course, away from the moon and out in into the blackness of space.

Mission control pleads with Cain to turn the Moonshot around, but Cain has finally found his freedom. At last, Cain is no longer exiled from death.

The story is brilliantly written with a narrative that is purposefully jarring, chopped up and stitched together, just like Cain’s poor body. If you’ve ever wondered what an R-rated Twilight Zone would like — this is it.

Alfred Coppel, who was himself a fighter pilot, may have experienced something like what Cain went through with the Second Red Scare in full tilt, and President Truman’s Loyalty Order signed so recently. Coppel seems to be cautioning us with this tale: Let us achieve great things, but let us not lose our souls in the process.

“The Exile” is free and available to read, thanks to archive.org, here.