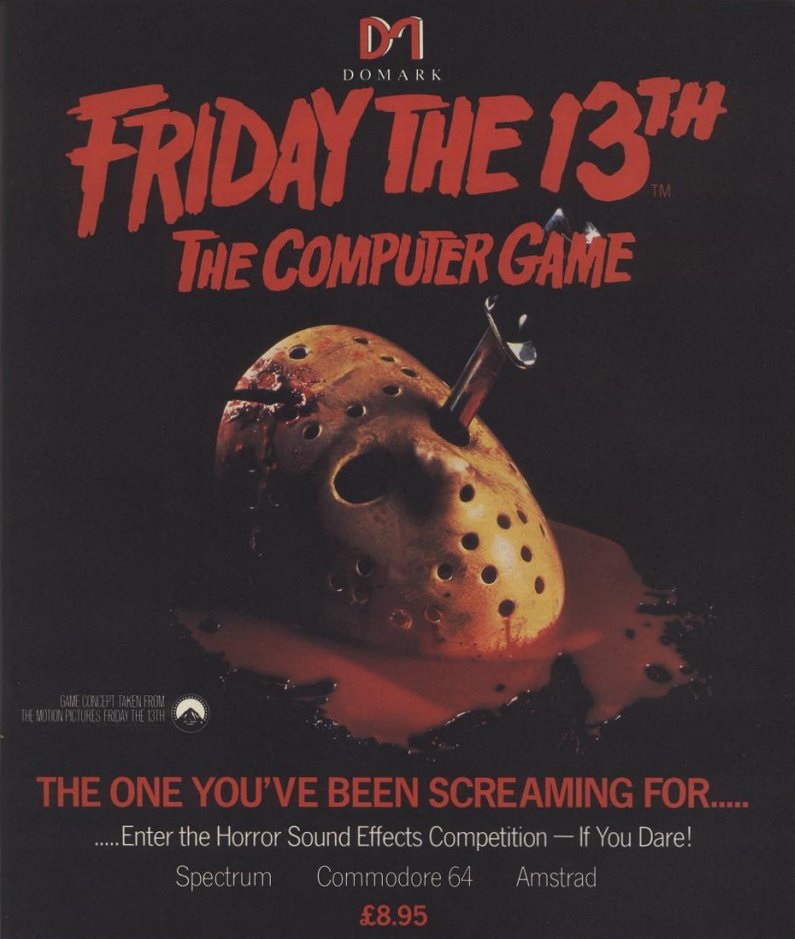 Yesterday here on Halloween Love we delved deep into the decades-later phenomenon the 1989 Friday the 13th Nintendo game has recently spawned, taking a look at the various toys and products that have come in the wake of NECA’s purple and blue Jason Voorhees action figure.

The game, made by LJN, is often considered by fans to be the only Friday the 13th video game ever made, which isn’t quite the case.

You see, four years before Jason was turned into a colorful 8-bit icon, he made his video game debut in a game that time has largely forgotten, and today we dig it up and force you to remember.

Sounds fun, right? You like being forced to remember terrible things from the past, right? RIGHT?! 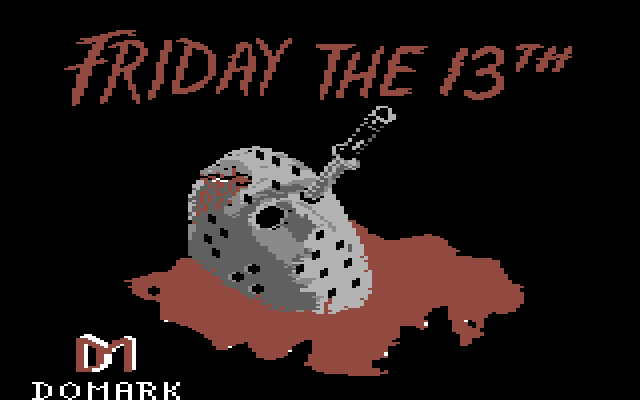 One year after bursting onto the video game scene, UK-based company Domark set their sights on Friday the 13th, which at the time was up to its fifth film installment. It was in 1985 – the same year that Nintendo became a thing – that they released Friday the 13th: The Computer Game, initially for the Commodore 64 and subsequently for the ZX Spectrum and Amstrad CPC.

Much like the Nightmare on Elm Street game, Nintendo’s Friday the 13th offering was an incredibly odd adaptation of the movies, with the colorful look of Jason only being the tip of the iceberg. Presumably because LJN felt Jason alone wasn’t enough of a threat, the game forced you to do battle with things like wolves, bats and even zombies – none of which were of course ever present in the films.

If you thought LJN took liberties with the franchise, well, let’s just say that Domark’s interpretation of events makes LJN’s look like the most faithful video game adaptation of the films one could possibly make… 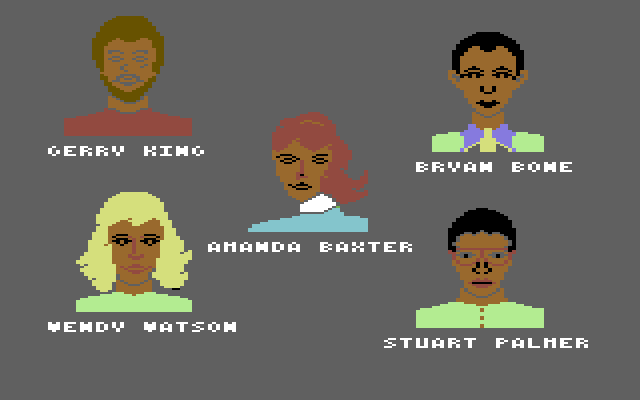 The basic premise of Friday the 13th: The Computer Game was that you played as one of five campers of your choosing – with names like Gerry King & Wendy Watson – tasked with roaming around and avoiding attack from Jason Voorhees. Sounds pretty much like the movies, right? Well that’d be because you totally cut me off, before I got a chance to finish.

The challenge of this particular game was that you never knew when Jason was in your midst, as he blended in with all of your camper friends. And when I say blended in, I mean that he literally shape-shifted into your friends, to the point that you never knew which friend was actually Jason, until a pixelated weapon was inserted into a hole in your head that you didn’t previously have. 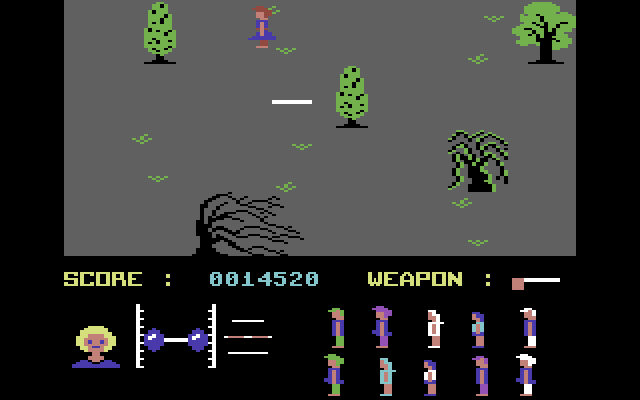 Think John Carpenter’s The Thing, except with Jason instead of deformed monsters. Well, I guess Jason is a deformed monster, but you get what I’m trying to say here. Think Jason Goes to Hell, I suppose is more like it.

Basically how it worked was that you walked around collecting weapons that vaguely resembled chainsaws and axes, arming yourself with the proper tools necessary to defeat Jason, once one of your friends inevitably transmorphed into him.

Oddly enough, the only way you could determine whose body Jason was hiding inside of was to whack them all over the head with one of those weapons; if it hurt them, they weren’t Jason – otherwise Jason would award your terrible (and totally illegal) friendship skills by showing you his true form.

So, what did Jason look like, once he stopped hiding and became Jason? Again, the NES version of Jason looks screen accurate compared to the big guy’s very first pixelated rendition, which didn’t even include a hockey mask. In fact, Commodore 64 Jason wore a fucking belly shirt. I shit you not. 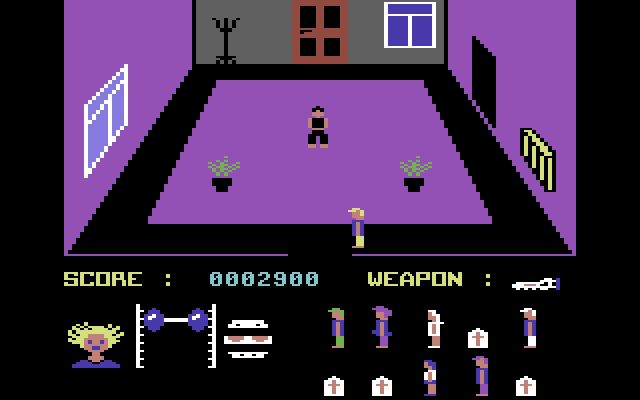 One of the other missions of the game was to locate a giant cross and place it in a building, which would provide a sanctuary for yourself and your fellow campers, by making that structure Jason proof. Yes, Domark turned Jason into a shape-shifting vampire. Decades ahead of True Blood on that one, which you kind of have to appreciate them for.

If there’s anything the game got right it’s that it was at least set at Camp Crystal Lake, the grounds of which were littered with things like a church, cabins, a barn and a graveyard. Nowhere in sight was an actual body of water, but we’ll let that slide. The game map was called Crystal Lake and since I’m grasping for straws here in an effort to say a single nice thing about this mess, that’ll have to do. 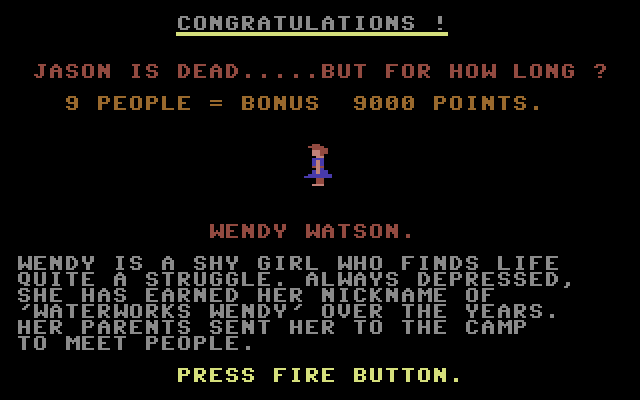 And that’s more or less all there is to say about the very first Friday the 13th video game, which now that I think of it is actually better off left in the past, undiscovered by those who never played it and unremembered by those who did. So now that this post is through, let’s all agree to forget about it again, shall we?

Wait. No. One more thing. Here’s a few minutes of actual gameplay, and then you can erase it from your memory. Deal?