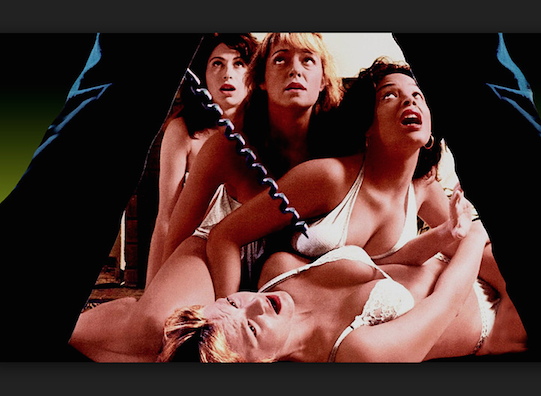 It’s time for some interaction. I want to mingle (digitally) with Halloween Love readers and get to know them a little better. Chances are most people who regularly come here love horror … a fairly safe assumption to make I would think, and the only thing I enjoy as much as watching horror is talking about horror.

Horror can be a passion and the nicest most genuine people I have met through my life have always had a passion for something. Movies, comic books, science fiction, sport … fishing? doesn’t matter, I could happily sit in a pub and listen to passionate people talk for hours. They come alive, you get to see the real them and learn stuff as well. I’d say 50% of my most pleasing horror movie discoveries have come from listening to other people suddenly mention them. In this series of articles I’m reaching out to the world to find out what YOUR favorite horror movies are, and most importantly, why they are your favorites.

Up first is Rebeka Fairbanks from Ann Arbor, Michigan. Asked to describe herself in one word she selected “Funny” and if facebook is to be believed she likes Fleetwood Mac, Lego and Harry Potter among many other things.

Putting together any kind of ‘favorite’ list is really just capturing a moment in time, 12 months from now choices might be different and new movies discovered. So, at this point in history I hand you over to Rebeka with her top horror movies thus far …

“This is the only movie where I have felt physically ill while watching. Not because of the creepy under dwellers, but simply because of the tight spaces in the underground caverns that the characters were climbing through. What I like best about this is the all-female cast and especially love how the two main characters were so badass. The sequel isn’t bad either.”

“My favorite ‘zombie’ movie although technically the aggressors aren’t zombies, just ‘infected with rage’. I almost poop my pants a little whenever I watch the scene in the tunnel with the flat tire (OH MY GOD). The 4 main characters in this movie are just so damn likeable and I root so hard for them each time I watch, even though I know how it’s going to play out. Plus it’s nice every once in a while to have a movie that has a happy ending (If you don’t watch the sequel hahahaha).”

“I saw this movie just in the past year on Netflix and I loved it! I loved the whole premise of the movie, as well as the characters. I can’t really explain the exact reason of why I love it so much without giving it away, so I’ll just say I love the twist ending. Also, there is a character named Muffy St. John. BEST NAME EVER, end of story.”

Silence Of The Lambs.

“Classic, classic, classic. Hannibal Lecter is one of the greatest fictional villains … similar to Dexter Morgan, but instead of offing ‘killers’ he just murders people with no taste. I always ponder if Hannibal met me, would he kill me? I always conclude with a ‘Yes’. I would be the next door neighbour who baked him brownies which were too gooey in the middle. BOOM, dead. I would also like to mention that I do enjoy the strong female lead played by Jodie Foster.”

“This is my favorite horror anthology. I thought the way they intertwined the storylines was clever. My favorite segments are the ‘School Bus’ and Brian Cox’s encounter with the oddly cute but creepy ‘Sam’. My runner up for anthology movies is ‘Nightmares‘.”

“In addition to ‘Nightmares‘, this was one of the first movies that introduced me to horror. I think I identified with it as it centers around a young girl. The special effects are excellent, in my opinion, even though they are probably considered to be really dated. What I love about this movie: T bone steak, channel changing fights, pool scene, creepy tree scene, CREEPY CLOWN SCENE, Zelda Rubinstein, meaty tennis balls.”

“I love Adrienne Barbeau and how she is a jazz DJ in the small town of Antonio Bay, and her station is in a lighthouse. I don’t think it can get much cooler than that. Plus Jamie Lee Curtis and Tom Atkins are in this, which make for good times. This is a great story about a quaint little town with a sinister past.”

Drag Me To Hell.

“The fight scene in the car makes me laugh so hard every time I see it. I love the comic nature of this film, and that there are so many jump out scares in it. It’s reminiscent of ‘Thinner‘. Curses are such a great subject for horror movies.”

A Nightmare On Elm Street.

“I love the idea that there is no safe place for these characters, and you never really know what is a dream and what isn’t.”

“If I were to make a horror movie, this is what I would want it to be like. At one point, after the pizza boy gets killed, one of the characters picks up a slice of the pizza and starts eating it … that made me laugh so hard! I love the relationship between the two sisters in this movie, as it reminds me of my sister and me. Also, I would just like to add that it would suck so bad to get killed by a drill!”

A HUGE thank you to Rebeka for taking part … If YOU would like to feature and reveal all then just message me below or on facebook and I’ll be in touch.