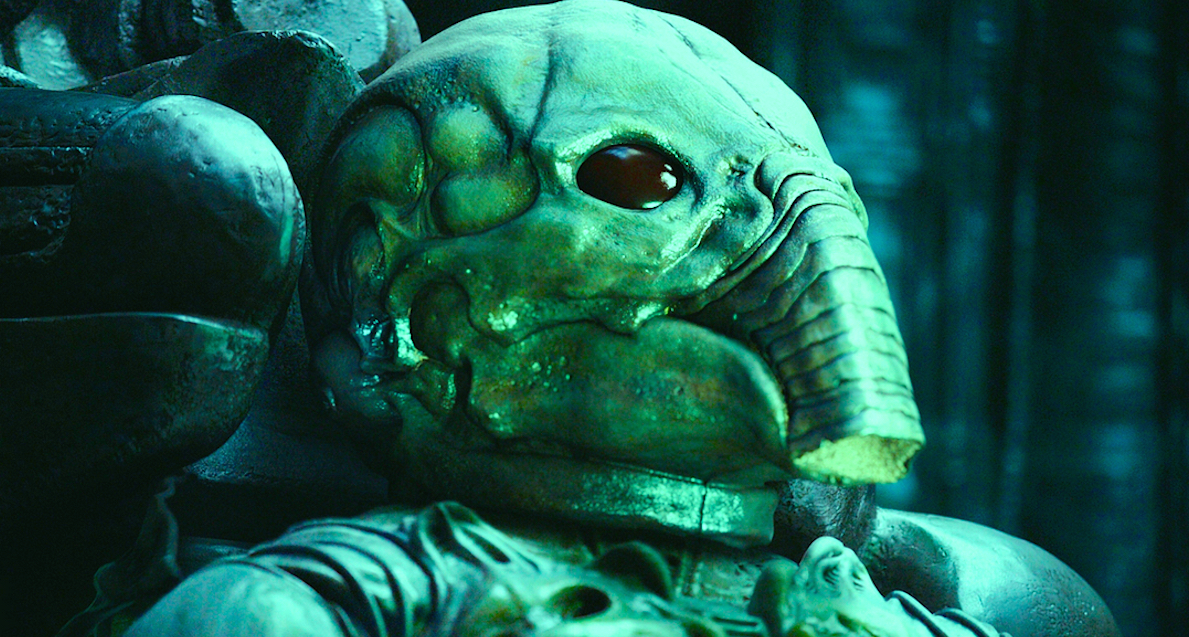 My journey through the troubled later years of the Alien franchise reaches its conclusion today with some thoughts on Prometheus. I followed the production of Prometheus with an almost rabid excitement a few years ago, searching for every drop of news and pondering every announcement with a level of interest I had never felt before. At the beginning it seemed that Ridley Scott was returning to make an actual chest-thumping Alien movie, then rumours surfaced claiming it was an entirely new sci-fi movie, before finally hearing from Scott himself that the film shares “strands of Alien‍’​s DNA, so to speak” – which suggested he was somewhere between the two.

Prometheus is a movie that desperately wants to do its own thing, tell a story without constraints or rules, but by placing it in the Alien universe the freedom it probably needed and deserved became impossible. Make no mistake, this IS an indirect prequel to Alien, and like most prequels it won’t be able to avoid providing answers to questions that have been percolating in the minds of every Alien fan for years, if not decades. The mystery of the space jockey, the origin of the Alien species – anyone who loves the franchise will have pondered these questions many times over, and personally I could have quite happily lived my life without knowing the answers that Prometheus gives us.

Prometheus expensively shits on the beautiful mystery contained within Alien, doing it in a clinical, sterile and surprisingly bland way. It’s a film with grand ideas and universe spanning themes, but 20 minutes in, you realize the big talk and epic scope is a wafer thin layer that can be easily peeled away, and what you are left with is a soulless slice of sci-fi horror, packed with forgettable characters and a really flat atmosphere.

Nobody wins with the version of Prometheus we ended up getting. People who wanted to see Scott return to the Alien franchise got a movie that stays on the fringes, too afraid to properly enter. People who wanted Scott to just create something fresh and original got a detour back into familiar territory and had to deal with the limitations that brings. It floats in a void between the two directions it could have taken, never committing to either and suffering for it.

Prometheus needed to have more courage, more bravery and some bigger balls! I don’t blame Scott for wanting to steer clear of the Aliens, they were no longer the uniquely perfect creatures he and Giger originally brought to the screen, but if you want to ignore them then IGNORE them! 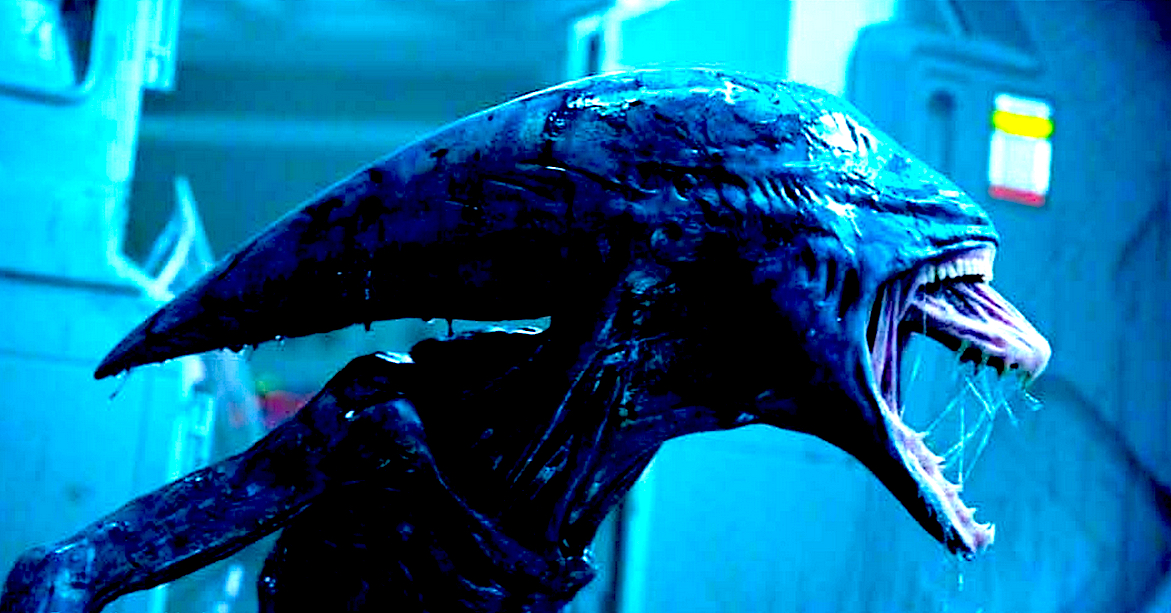 Don’t create an incredible teaser trailer that is knowingly designed to remind people of Alien, from the haunting music to the way the whole thing was edited. Don’t build an entire movie around one of the most perfectly mysterious and memorable moments from Alien. And definitely DO NOT end Prometheus with the birth of a creature that looks and acts a lot like an Alien! The “Deacon” as it came to be called, is apparently not some kind of Proto-Xenomorph, but they just couldn’t resist the urge to make it look like one!

Adding fuel to the troubled fire that burns beneath Prometheus is much of the dialog, and the characters that were created to speak it. When I looked at Alien Resurrection last week, I wrote about the fatal poison that can infect movies when they are populated with characters you don’t give a shit about. Prometheus JUST ABOUT avoids being totally barren when it comes to likeable characters but they certainly aren’t strong characters, and the way they are written is depressingly bad for large portions of the movie.

A perfect example of this is Fifield, a geologist played by Sean Harris. Fifield is ANGRY, and don’t you dare forget it! He wakes up from stasis angry, eats his food without utensils in an angry way, gets angry when the team discover an Alien lifeform for the first time, and ultimately becomes an angry zombie who can bend his legs in interesting ways. Oh, and just in case we were in danger of missing the fact he is also a rebel (when he isn’t feeling angry), the writers get him to howl like a wolf when he releases his mapping probes and allow him to smoke pot inside his spacesuit! He’s a fucking cartoon character, written in the most basic way, and it’s a huge waste of the talent Harris has and displays in other roles.

Unfortunately Fifield is just the tip of this iceberg, and I think it’s fair to say that the entire crew of the Prometheus act in an incredibly unprofessional and almost childlike way throughout the whole movie.

Some people might be able to deal with that and look past it, but personally I find it painful to watch, and it pulls me right out of the movie. I’m not saying I can’t handle characters being spontaneous or wild, but it has to fit the moment, and not be at the expense of making the characters seem stupid for the sake of creating some misguided light relief.

Think back to Predator briefly. Nearly every member of Schwarzenegger’s team had moments that made you smile or lifted the tension for a minute or two but you NEVER doubted they were highly trained professionals, and it’s that level of respect for the characters and the balance they maintained when writing them that makes you care. You feel like you really get to know them in the short space of time you are watching them, THAT is good writing, and that is why you get interested in their fate, which leads to concern for their safety and a memorable movie experience.

Noomi Rapace as Elizabeth Shaw, and Logan Marshall-Green as Charlie Holloway, are likeable but far too weak to be characters you can become emotionally invested in. This is especially a problem when it comes to Shaw as she is supposed to be the character we ride with and worry about – a replacement for Ripley in a time before Ripley was born.

Holloway is all over the place, a rubber ball character. An educated man who removes his helmet to breathe air that he cannot possibly know is totally safe. A man overflowing with optimism and hope who then becomes depressed a few hours after landing because in that time he hasn’t already been greeted by God and invited to dinner. He had potential, but they needed this ridiculous behavior to push the story forward, so he was sacrificed, literally.

Idris Elba is limited to playing the accordion which might explain why he was so happy to kill himself at the end. And Guy Pearce as Peter Weyland is lost under a mile of prosthetics and make-up that doesn’t look very convincing. Why not just hire an actual old actor to play an old man?

Positives? Michael Fassbender as David is excellent, playing him as curious and devious with a dark programming he cannot escape, even though most of the time he is simply used to solve problems the script writers couldn’t figure out, such as suddenly being able to read and operate the Engineer technology. Fassbender is a truly gifted actor and the movie would have been a whole lot worse without him.

Prometheus also comes alive during the rare moments of horror. Beautiful reminders that Scott STARTED all of this by making an incredible sci-fi horror movie back in 1979. A movie that Prometheus is apparently too smart to be closely connected to and wanted to shy away from. Shaw’s computer-assisted Alien abortion scene is a blood soaked, intense and gruesomely sweaty triumph. It doesn’t come close to competing with John Hurt’s indigestion, but in its own way it has become an iconic movie moment that will be remembered.

When you boil down Prometheus, the core of the movie is simply Weyland’s search for a way to cheat death, nothing more. Shaw and Holloway think they are on a mission to answer humanity’s greatest question, but the truth is they are just there to help an insane billionaire live forever and get chased down corridors by some special effects. They were deceived and taken on a journey that was never going to give them what they wanted, and I think I know how they feel.