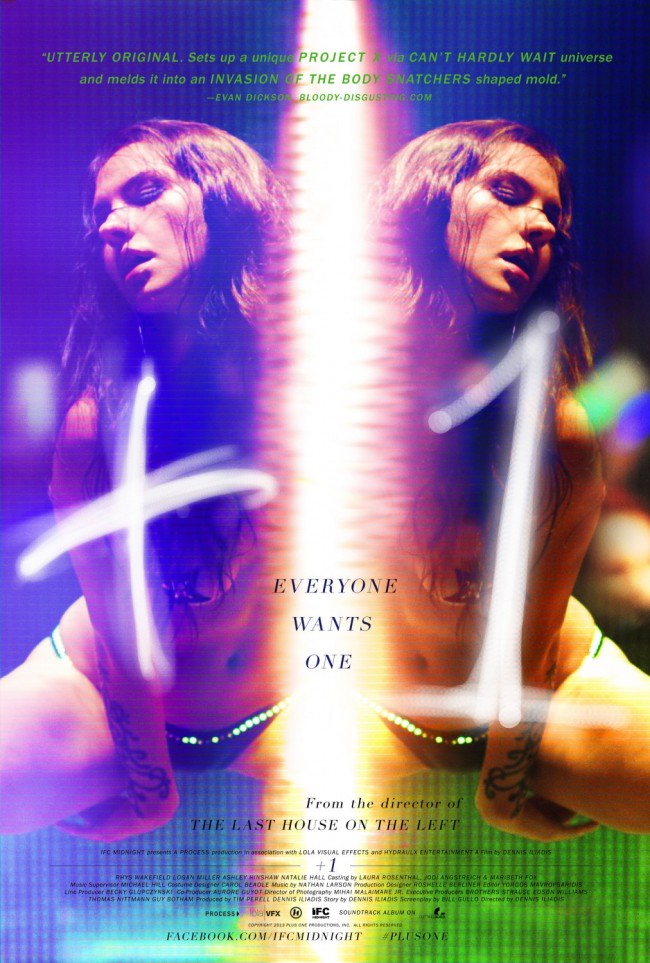 Ya know what I love more than anything? When new movies hit Netflix Instant the same day that they’re released on home video. Such is the case with Plus One (aka +1), the latest film from Dennis Iliadis, the director of 2009’s Last House on the Left remake – which is, in my opinion, one of the better remakes to come along in the last several years.

Plus One was released on DVD this past Tuesday and I was delighted to discover last night that the film is already available for instant streaming on Netflix. Make sure you always check with Netflix first when there’s a new release you want to see, because I can’t tell you how many times I’ve paid for movies On Demand, only to soon thereafter find that I could’ve watched them for free on Netflix. Well, I pay for Netflix, but you get what I’m trying to say.

Anyway. Where was I? Oh right, I’m supposed to be reviewing Plus One, rather than trying to get you to sign up for Netflix.

Have you ever watched a movie that you didn’t really care all that much for, to the point that you were kinda just waiting for it to end, and then you realized once it did in fact end that you couldn’t stop thinking or talking about it? That’s precisely the experience I had last night with Plus One, a film that isn’t exactly executed all that well, but nevertheless leaves behind a wealth of interesting questions and ideas – oddly enough, that’s much the same way I felt about The Purge, which also stars Rhys Wakefield.

After a brief introduction to our two main characters, whose strong and stable relationship falls apart in the wake of one misplaced kiss, a meteor falls from the sky and turns relationship troubles into paranormal troubles. At a huge and totally over the top house party – the kind of party that people either don’t really have or that they just don’t invite people like me to – things take a turn for the weird when duplicates of each person inside and outside of the house converge on the party, re-enacting their own actions from several minutes prior. It’s up to the more intelligent and less inebriated party-goers to figure out what the hell is going on, while others don’t seem to grasp the fact that some seriously strange shit is afoot. Because, ya know, some people just want to party.

Part Can’t Hardly Wait ripoff, by way of Superbad, and part Twilight Zone episode, Plus One is undoubtedly an interesting film, one that has a whole lot to say – or, at least, one that seems to have a whole lot to say. The problem? It doesn’t really ever manage to say all that much, or get across the ideas that I can only assume Iliadis was trying to get across. Blending together a time travel/body snatchers flick with a college party movie is a unique idea, for sure, but I couldn’t help but feel that Iliadis just didn’t go far enough with the concept, and really drive home whatever it is that he was trying to say about us humans, as a species.

By focusing more on the situation, and the inherent weirdness of the idea of watching yourself walk past yourself, than on the characters themselves, Plus One is ultimately not nearly as interesting or powerful as it by all means should be. It’s hard to really care about any of the characters, or what happens to them, and given that the story is so much about human beings and the way we look at ourselves and others, the lack of a human element to the film really cripples the intention of the unique concept.

It almost seems like Iliadis feared making too smart of a film, and so he played up the sci-fi/horror elements, rather than servicing the bigger picture. Repetitive scenes of the ‘plus ones’ traveling ahead in time only serve to make the film drag and bore, and I really wish the script had put more emphasis on the characters and the overall message of the film. There are glimmers of brilliance throughout, and a little tweaking could’ve really made Plus One something truly special. If only Rod Serling were still alive, and could’ve touched up the script a bit.

Like an oddball coffee table decoration that your guests can’t stop talking about, Plus One (despite its flaws) is at the end of the day a highly interesting conversation piece, which I can only assume is what Iliadis intended it to be. What would you do if duplicates of you and your friends crashed a house party? What would you do if you were given the chance to use those duplicates to play around with time? Would you talk with your duplicate, in an effort to learn something about yourself? Would you get so scared that you’d kill yourself, so to speak? Or would you use your new-found time travel abilities to fix past mistakes?

These are the questions that Plus One raises, and that the fairly one-dimensional characters are faced with both asking and answering. The results of their answers, while interesting, are not nearly as interesting as pondering these questions for yourself, which I’m willing to bet you’ll be doing after you get done watching the movie. In a world where most horror movies are predictable, generic and as non thought-provoking as you can possibly get, Plus One stands out as being both different and intelligent, and for that alone I must recommend that you give it a watch for yourself.

If you do get around to checking it out, I’d love to hear what you think, so drop a comment below and let’s talk about it!