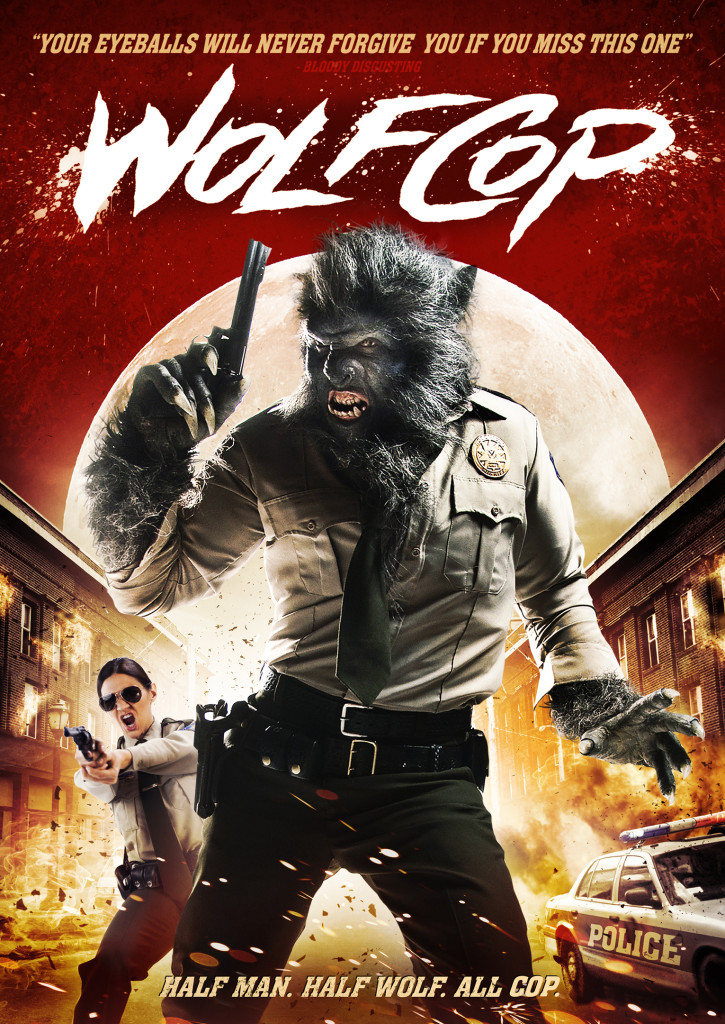 The ‘mash-up’ film has become a bonafide sub-genre of horror in recent years, with movies like Sharktopus, Piranhaconda and the upcoming Zombeavers stitching together two different things to form silly slices of entertainment. You can now add the brand spankin’ new WolfCop to the mix, which has a similar target demographic in mind.

Though the descriptive title leaves little need for a plot description, it’s only right that I summarize…

After being attacked in the woods, alcoholic sergeant Lou Garou begins undergoing a transformation into the titular WolfCop. With his new-found power, Lou initially devotes his time to cleaning up corruption on the streets, but soon uncovers an ancient secret when he realizes he was turned for a reason.

It’s hard to say what qualities make or break a horror-comedy, but when thinking back on some of my personal favorites that fall into that category, things like entertaining characters and over the top gore are present in all the ones that come to mind – Evil Dead 2, Dead Alive and Slither are just a small handful that are rattling around in my brain right now.

Of those two qualities, WolfCop mostly succeeds in the gore department, as the effects are almost entirely practical and the transformation sequences more akin to 80s werewolf flicks than ones from the present day. From severed heads to slashed up faces, writer/director Lowell Dean’s exploitation homage is anything but blood-less, with the old-school effects sure to please fans of 80s horror.

Alas, WolfCop has little more going for it than a strict adherence to the way violence was brought to the screen in that oh-so-glorious decade gone by. Because while it may satisfy your inner gore-hound, this one reminds that gore and gore alone does not a good horror-comedy make.

There’s an unfortunate lack of creativity throughout WolfCop, making it feel like one of those movies where the cleverness begins and ends with the title. Hoping to skirt by and entertain solely based on the idea that it’s funny to see a werewolf acting like a cop – and it is, at first – it quickly becomes clear that there’s not even enough meat on the film’s bones to entertain for a measly 75 minutes.

It’s almost a shame that the practical effects are so solid, because the talents of the makeup artist are sorely underutilized in the film. Yes, there is plenty of gore, but even the violence lacks that creativity that you’d expect from a film with the title WolfCop. It’s almost as if Dean was afraid to go too far over the top with the concept, resulting in a movie that is surprisingly not all that fun to watch.

The lack of creativity extends to the characters, who are as unremarkable as the kill scenes and the film’s overall sense of humor. Unlike recent horror-comedies such as Zombieland and Shaun of the Dead, there are no characters in WolfCop that are actually fun to hang out with, nor is Lou Garou a hero worth rooting for or desiring an action figure of. And that’s a bummer.

I’m not going to say there’s absolutely nothing charming about WolfCop, but with nearly all of that charm and all of the film’s cleverness limited to the title and the general concept, it’s hard to call the flick anything but a horror-comedy that misses the mark. It’s the sort of film that has a cool poster, a catchy title and a fun trailer, but is ultimately a punch-line without any real joke.

I probably sound like an old scrooge when I say that I wasn’t entertained by a film called WolfCop, and even I must admit that I feel a little weird about that, but evocatively silly concepts and a juvenile sense of humor are not what I’m really looking for when it comes to horror-comedies. I say that to remind that just because WolfCop isn’t my personal cup of tea, that doesn’t mean it won’t be yours.

After all, I’m the dude who often rolls his eyes at Troma films, so those who worship at that particular altar should take my opinions on this one with a grain of salt. If Lloyd Kaufman is your kinda guy, then you’ll probably have a whole lot more fun with WolfCop than I did.

Oh and there’s totally an exploding penis in the movie, which is always a plus.