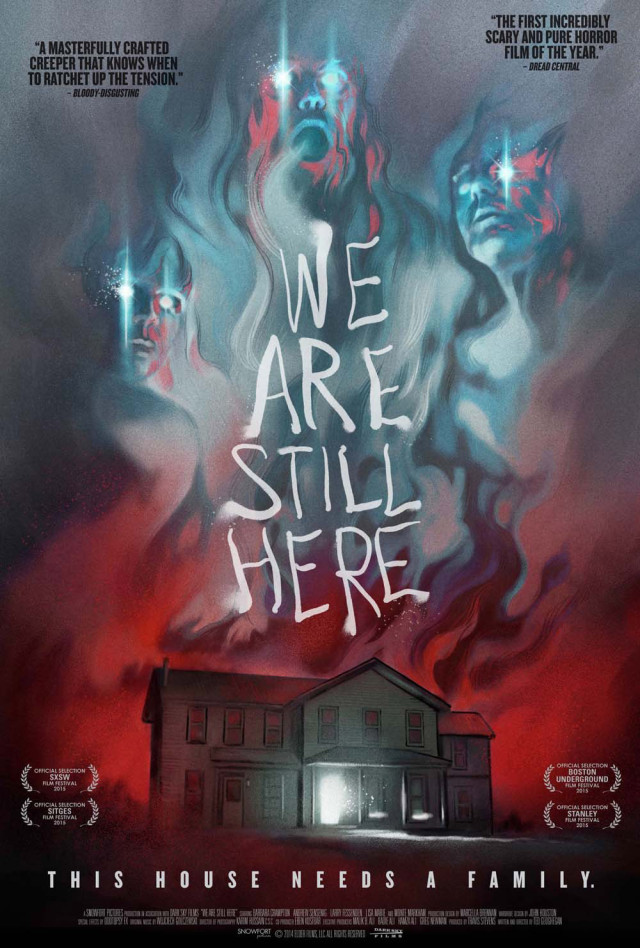 Plenty of horror films that have come along in recent years have touted themselves as “throwbacks,” implying that they evoke the spirit of genre cinema from decades past. Very few, however, have actually managed to live up to the promise. Ti West’s 2009 film The House of the Devil is one that notably and admirably achieved its goal, and you can now add We Are Still Here to that list.

The directorial debut of Ted Geoghegan, We Are Still Here tells the story of Anne and Paul Sacchetti, who recently lost their college-age son in a car accident. In the wake of the tragedy, the couple moves from the city to an old house on the New England countryside, and Anne begins to believe that their deceased son is in the house with them. But it soon becomes clear that the presence is of the sinister variety.

There’s something incredibly refreshing about We Are Still Here, as the film immediately feels like it probably should’ve been released in the decade the story is set: the 1970s. Much like House of the Devil, Geoghegan’s impressive debut is all about atmosphere in the early going, and the lack of urgency to the storytelling indicates right off the bat that the director’s hands are good ones to be in.

Creaky floorboards, lingering establishing shots and barely-seen terrors lurking in the darkness serve to effectively set the mood in We Are Still Here‘s first half, and strong performances from Andrew Sensenig and horror icon Barbara Crampton (Re-Animator) make us care about the characters whose lives are clearly about to be in serious jeopardy. And that matters a whole lot, because the movie very much asks us to care.

Once the couple’s hippie friends stop by to spend the night, it’s not long before this slow-paced film becomes an entirely different beast. Larry Fessenden is a particular delight as a stoner who dabbles in dark magic, and he and movie wife Lisa Marie (Ed Wood‘s Vampira) bring both humor and horror to the proceedings. Almost as soon as they start playing around with their own brand of magic, oh boy do things take a turn for the crazy.

I of course don’t want to spoil any of the movie’s secrets, which are unfortunately on display in both the trailers and even most plot rundowns, but let’s just say that the relatively subdued first half of We Are Still Here somewhat belies the movie that Geoghegan has made here. Once the monsters come out and the blood starts flowing, this one has more in common with 80s splatter films than 70s ghost stories.

But We Are Still Here‘s strongest suit isn’t the impressive practical effects so much as it is the mythology that Geoghegan infused into the script. There’s more to the story than there appears to be on the surface, as a seemingly simple ghost story transforms into the much larger tale of a mysterious town with an incredibly dark secret. The exposition at times leaves something to be desired, but it all comes together in the end.

With its middle-aged main characters and slow-as-molasses pace, We Are Still Here is the sort of movie that’s decidedly not made with modern audiences in mind, and that’s precisely what those who understand what it’s going for will appreciate most. And there’s a whole lot for horror fans with tastes similar to Geoghegan’s to appreciate here, as his first outing is one of 2015’s standout genre treats.

At a brisk 80-minutes long, We Are Still Here is both a quick watch as well as one that will stick with you long after the credits have finished rolling. Best of all, it’s the sort of throwback that brings more to the table than simply rehashing ideas from the movies that inspired it – ultimately feeling less like a copycat and more like a film that would’ve been right at home alongside those classics on the video shelf.

A home video date hasn’t yet been set for We Are Still Here, but here’s to hoping Dark Sky Films gives it the VHS treatment. Because this is the kind of movie that should require you to slide a big ole tape into your clunky, somehow-still-working VCR. In lieu of that, pop some popcorn, turn the lights down and the volume up, and enjoy this retro-inspired haunted house flick on the VOD outlet of your choosing.