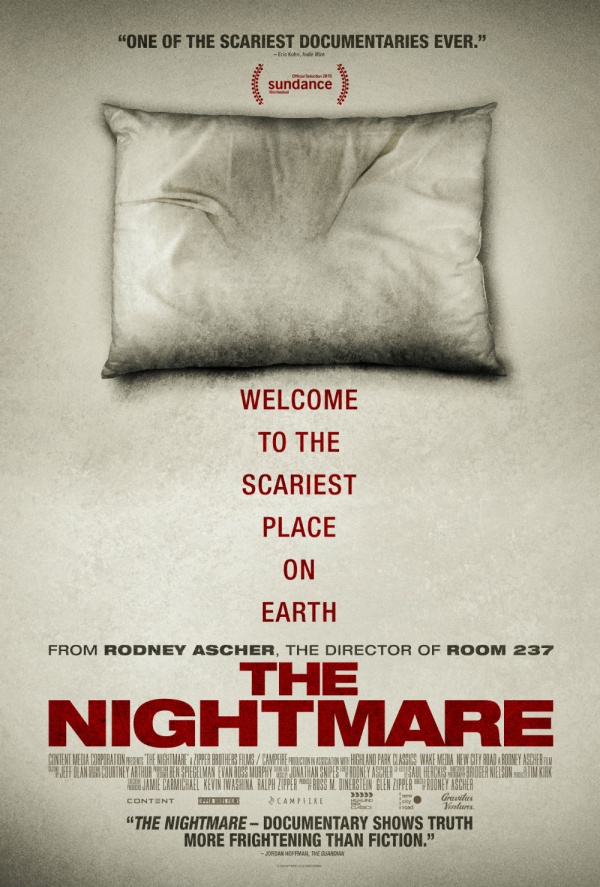 It’s estimated that we spend 1/3 of our lives sleeping, which equates to nearly 30 years of dreaming for the average human. That’s pretty remarkable when you think about it, and it’s because we spend so much time doing it that many – including myself – are absolutely fascinated by the things that happen while we sleep. And pleasant dreams/scary nightmares are merely the tip of the iceberg.

Directed by Rodney Ascher (Room 237), The Nightmare is a documentary that explores the phenomenon of sleep paralysis, defined as a transitional state between wakefulness and sleep. In this state, the mind often conjures up horrifying images while the body is completely immobilized, and the doc features stories from eight people who experience sleep paralysis on a regular basis.

The topic of The Nightmare is one I have some degree of familiarity with, as I have in recent years had a small handful of sleep paralysis experiences. Unlike many, however, the absolutely terrifying inability to move my body shortly after falling asleep and/or shortly before waking up has never been accompanied by nightmarish imagery – and right about now I’m pretty damn thankful for that.

Unfortunately for The Nightmare‘s subjects, their bouts with sleep paralysis all include encounters with demonic entities of various shapes and sizes, and their stories are told through both on-screen interviews as well as re-enactments of the experiences that have plagued many of them for their entire lives. And after hearing their stories, you just might think twice about ever going to sleep again.

Though Ascher’s interviews capture the palpable sense of terror that his subjects feel on an almost nightly basis, it’s his wonderfully realized re-enactments that make The Nightmare one of the downright scariest movies of the year. Mysterious figures lurk in the shadows of well-lit bedrooms, stalking helpless victims as they sleep, and Ascher displays a James Wan-like ability to unnerve and petrify.

But what makes The Nightmare‘s re-enactments and detailed accounts so terrifying is that they don’t exist within the confines of a Hollywood horror film. These are real stories told by real people, and though Ascher brings them to life in a fictionalized way, that doesn’t change the fact that what you’re seeing on screen is exactly what each of them has genuinely had the displeasure of experiencing.

So why do some us of experience sleep paralysis? The answer is different depending on who you ask, but one of The Nightmare‘s subjects suggests that the phenomenon is somewhat like a sexually transmitted disease – and it’s this concept, which I happen to agree with, that serves to make the documentary bone chilling in a way that purely fictional horror movies could only ever dream of being.

According to his story, the man started experiencing sleep paralysis after a girlfriend told him about her experiences, and later in his life he “passed it on” to another friend. It’s a simple case of an idea being implanted into your head and your mind running with it, and the mere suggestion of this idea makes you feel like you’re inviting something evil into your life simply by watching The Nightmare.

The fact that I’m contemplating downing a carafe full of coffee right now and staving off sleep until daylight starts pouring through my windows is a true testament to how effective The Nightmare is. There’s a certain safety when it comes to watching horror movies, as you know they can’t actually hurt you in real life, but The Nightmare shatters the safety of that fourth wall in a way that’s truly terrifying.

More than just a spooky horror film, The Nightmare is also an incredibly fascinating documentary, opening up the discussion about a very real topic that’s largely shrouded in mystery. The doc ponders why so many people share nearly the same visions and even suggests that alleged ‘alien abductions’ are actually the result of sleep paralysis, and it’s all as interesting as it is nightmare-inducing.

One particularly fascinating ‘chapter’ of the doc delves into the world of horror cinema, with a few of the interviewees comparing their experiences to films like A Nightmare on Elm Street and Insidious. Those films, they say, pinpoint the sort of horror that comes along with sleep paralysis, illustrating that effective horror movies play around with archetypes that are deeply ingrained into the human psyche.

There are pressing questions The Nightmare fails to answer about sleep paralysis, and it’s likely that many will take issue with the fact that there are no interviews with experts on the subject. It’s a gripe I understand, but the beauty of the doc is that it’s such a personal one. It’s not so much about answers as it is experiences and intimate interpretations of them, and rather than miss the expert touch, I found myself welcoming its absence.

While it’s by no means a perfect documentary, as there are some strange creative choices and the re-enactment scenes admittedly get a tad bit repetitive, The Nightmare is altogether as fascinating and terrifying as the phenomenon of sleep paralysis very much is. And it imparts, as one of the interview subjects describes one of her personal experiences, “a kind of horror that’s worse than in the movies.”

Needless to say, sleep is going to be a little less enjoyable tonight. And to me, that’s the sign of a damn good horror movie.