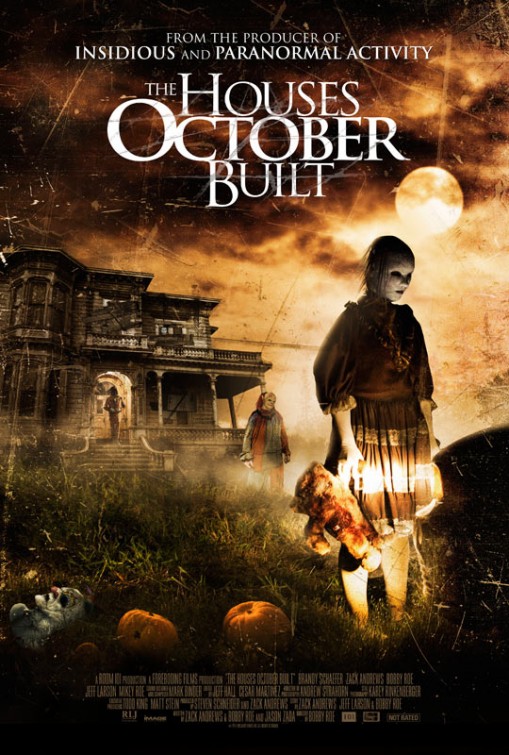 Found footage movies have acquired a pretty lousy reputation over the years. In many ways, the sub-genre has come to represent the absolute pinnacle of creative bankruptcy within the horror genre, as each new one feels like an exact replica of the last.

The problem with this rampant horror fan hatred of all things found footage is that the sub-genre is not to blame for the reputation it’s picked up. After all, ‘found footage’ is merely a filmmaking style, and it’s totally unfair to let a handful of bad apples spoil ALL apples.

As I’m always quick to remind fans who react to the words ‘found footage’ like vampires react to crosses, it’s not that the filmmaking style is inherently bad, it’s simply that the style is all too often wasted on generic crap that brings absolutely nothing new to the table.

But every once in a while, an exceptional found footage movie comes along that reminds us that the cinematic ‘gimmick’ can be really effective, when properly executed. And The Houses October Built is that movie.

Released onto VOD outlets this past Friday, The Houses October Built delves into the dark side of those Halloween haunted attractions we all love so much, centering on a group of friends who are in pursuit of the most extreme haunts they can find. They want to be scared, REALLY scared, and their journey takes them on a road trip to all sorts of backwoods attractions.

As they drive from haunt to haunt, the friends find themselves pursued by the creepiest costumed actors from each attraction, who don’t exactly seem to be the hospitable types. Unsure if it’s all part of the show or if their lives are truly in danger, the gang is soon led to a haunt that’s not like the others, where true horror awaits.

‘How scared do you really want to be?’

This is a question that’s becoming more and more commonly asked in the world of haunted attractions, as the boundaries are being pushed further with each passing year. Like the characters in the film, haunt-goers want to be more scared than they’ve ever been before, and haunt owners have responded to that desire by blurring the lines between fiction and reality.

The Houses October Built brilliantly taps into this escalation of fear in the haunt industry, coming along at the absolute perfect time in our society. This Halloween season more than ever, news outlets are flooded with reports of deadly accidents at haunted attractions as well as with stories of haunts that are pushing the boundaries in a big way, and co-writer/director Bobby Roe has used all of that real-life inspiration as the basis for his impressive debut feature.

The real joy of this particular found footage film is that it feels as natural and real as a movie made in this style can possibly feel, due in large part to the fact that Roe filmed at real life haunts across the country. I don’t know all the details about the making of the movie but I’d be very surprised if most of the ‘actors’ in the movie weren’t real people who thought they were being interviewed for a documentary, as it very much has that authentic feel.

Looking on IMDb, it appears that Bobby Roe made a documentary back in 2011 with the same title as this movie, and I’m willing to bet that much of that real documentary footage was used to comprise the film. The main cast has all the chemistry of a real group of friends, and they all genuinely feel like real people, rather than movie characters. That all goes a long way in lending authenticity to the movie, and oftentimes I found myself forgetting that I was watching a movie, and not a documentary.

The first hour of The Houses October Built is comprised of those five friends driving from one haunt to the next, and it’s as much fun going on virtual tours of those real life attractions as it is hanging out with the characters. They’re all quite likeable and their conversations highly entertaining to listen to, whether they’re reflecting on past Halloween/haunted house memories or getting drunk and being goofballs.

These early portions of the film are both fun and effectively scary, as the nature of the road trip allows for a handful of scares, even before the characters are ever put into any real danger. And oh boy. Once shit really starts to hit the fan, The Houses October Built is the world’s scariest haunted attraction come to life, and though the film plays into certain found footage tropes, it’s never anything less than effective.

One of the most brilliant things about the movie is the way Roe creates an entire world within the film, a community inhabited by rogue haunt actors who aren’t playing by the rules. It’s almost reminiscent of Tod Browning’s Freaks in many ways, and the world-building he sets up here leaves ample room for future sequel potential. The scariest thing about these sorts of attractions is that you never know who’s hiding underneath those masks, and that’s the idea that The Houses October Built is built on.

A seamless fusion of real interviews, real haunt footage and fictional thrills and chills, The Houses October Built is easily my favorite found footage movie of 2014, and an absolute must-watch this Halloween season. It’s also the most unique found footage film in quite some time, delving into subject matter that I can’t recall seeing any other movies play around with. Refreshing, to say the very least.

If haunted attractions are your thing, then The Houses October Built is tailor made for you. So grab a pumpkin beer, turn off all the lights and enjoy. But be forewarned; much the same way Jaws kept you out of the water, this POV Halloween treat will likely make you question ever visiting a haunt again…