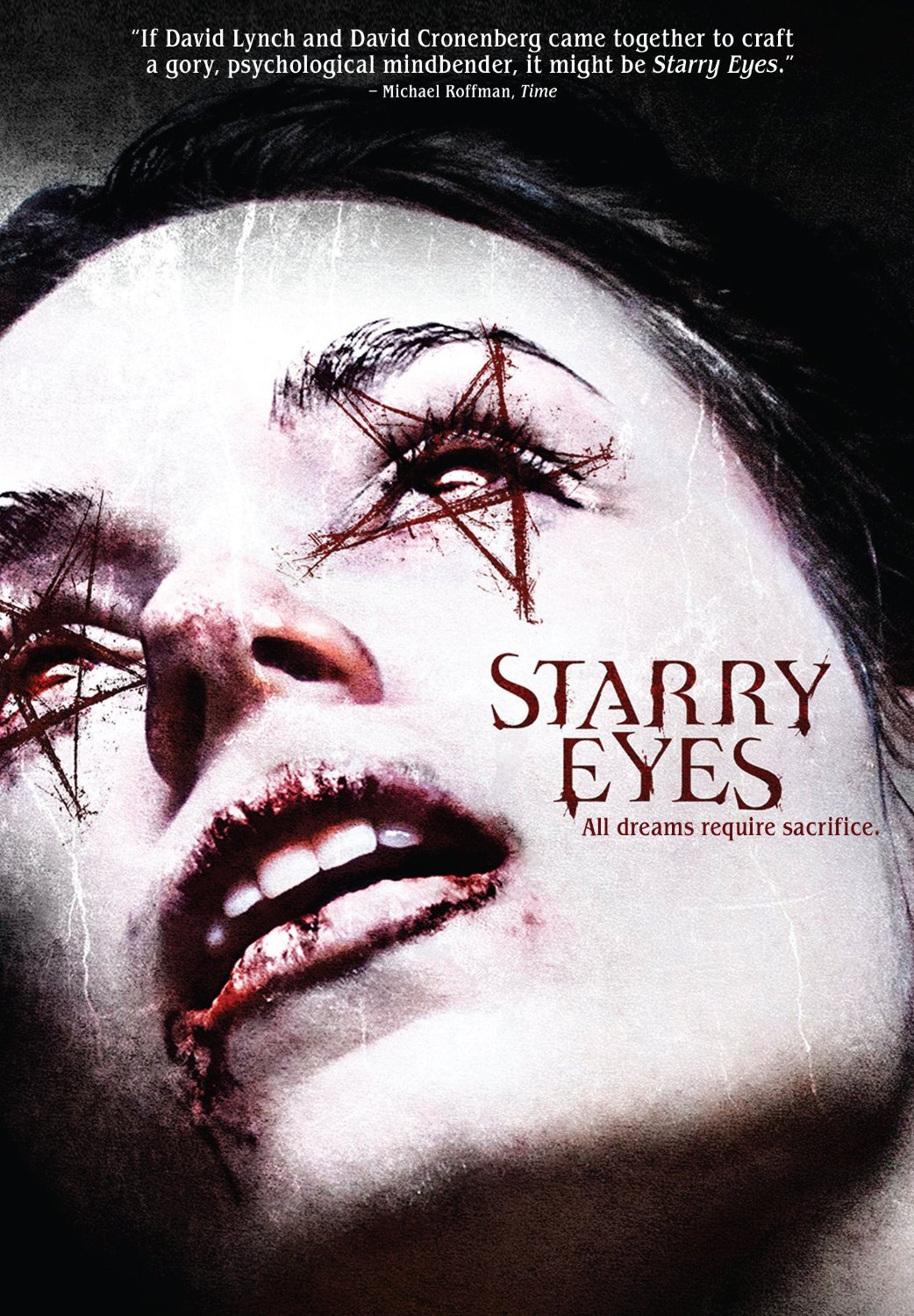 Especially around this time of the year, with awards season in full swing, it’s almost impossible to not be lured in by the glamour that seemingly embodies the Hollywood lifestyle. But as we’ve seen time and time again, there’s a dark side to all the glitz and glamour, and that side has never seemed quite so dark as it does in Starry Eyes.

Directed by Kevin Kolsch and Dennis Widmyer, Starry Eyes stars Alexandra Essoe as Sarah, a Hollywood hopeful who wants nothing more than fame and fortune. A starring role in a big production laid out in front of her, Sarah finds herself torn between her ordinary life as a waitress and her dream life as an actress: the latter requiring her to surrender her soul and transform into something quite unlike herself.

In this day and age, where nearly every possible idea for a horror film has been mined for all it’s worth, what the best ones tend to do is take those familiar ideas and put an entirely different spin on them. Calling Starry Eyes a body-horror film or tucking it into the possession/satanic cult sub-genres would not be out of line, though it’s the film’s unique execution of those ideas that makes it feel quite unlike anything that’s come before it.

A condemnation of the inherent evils of Hollywood, Starry Eyes serves as a gory and grotesque allegory for the degradation of the soul that comes along with losing yourself on the quest to achieve your dreams. As we see in the celebrity tabloids day in and day out, there’s something about fame and fortune that tends to change people on a cellular level, and with the film Kolsch and Widmyer have brilliantly used that idea as the springboard for a nightmarish horror story.

What makes Starry Eyes work so well is largely the fearless performance of Alexandra Essoe, which is (somewhat ironically) of the star-making variety. As Sarah, Essoe’s ‘good girl gone bad’ transformation is a sight to behold, and the character is one of the most memorable in the genre’s recent past. The Sarah that eventually takes over is entirely unrecognizable from the Sarah we meet at the start of the film, and Essoe’s powerful performance is equal parts haunting, harrowing and heartbreaking. It’s like watching a moth turn into the Devil incarnate, on its way to becoming a butterfly.

As shocking and disturbing as Starry Eyes becomes in the final act, when it quite frankly transforms into a gore-fest that feels almost Evil Dead-like, the film is at its most disturbing in the early going, when we’re watching Sarah give up little pieces of her soul in exchange for her dream. Unable to resist degrading herself in the pursuit of her starry-eyed ambition, Sarah’s story is one that unfortunately echoes the real lives of so many Hollywood hopefuls, and it’s for that reason that it’s so unsettling to watch.

It’s fitting that Starry Eyes was released last year, as 2014 was a year that the proverbial Hollywood curtain was very much peeled back. Both big time producer Bryan Singer and beloved actor Bill Cosby were exposed for who they really are, the buried truth of what’s been going on for many years finally surfacing. In a year where the dark side was on display for all to see, Starry Eyes feels quite timely, painting a portrait of Hollywood that’s so effectively disturbing because you know it’s more than fiction.

Speaking of 2014, it seems to have been the year of John Carpenter-inspired scores, and Starry Eyes is yet another reminder that the movie music he created is as enduring and iconic as ever. Jonathan Snipes’ score is full of synthy delights, right up there with The Guest as one of last year’s best. In addition to the 80s-style music, there’s also a recurring nursery chime that is almost dreamlike at first, feeling more and more sinister each time it presents itself. In other words, you’re likely to want the soundtrack as much as you’ll want the DVD.

Tearing down the iconic Hollywood sign and exposing it for the land of well-kept secrets that Tinseltown has continually proven itself to be, Starry Eyes is a cautionary tale that reminds to be careful what you wish for, and it’s a journey into the dark heart of fame that you’ll likely never forget. This isn’t horror of the ‘feel good’ variety, to say the very least, but it’s required viewing for anyone who’s into horror cinema that pulls no punches on its path to delivering a truly original vision of real-life issues taken to horrifying extremes.

Starry Eyes is further proof that 2014 was one hell of a year for the horror genre. Good luck trying to compete, 2015 – it’s not going to be easy.