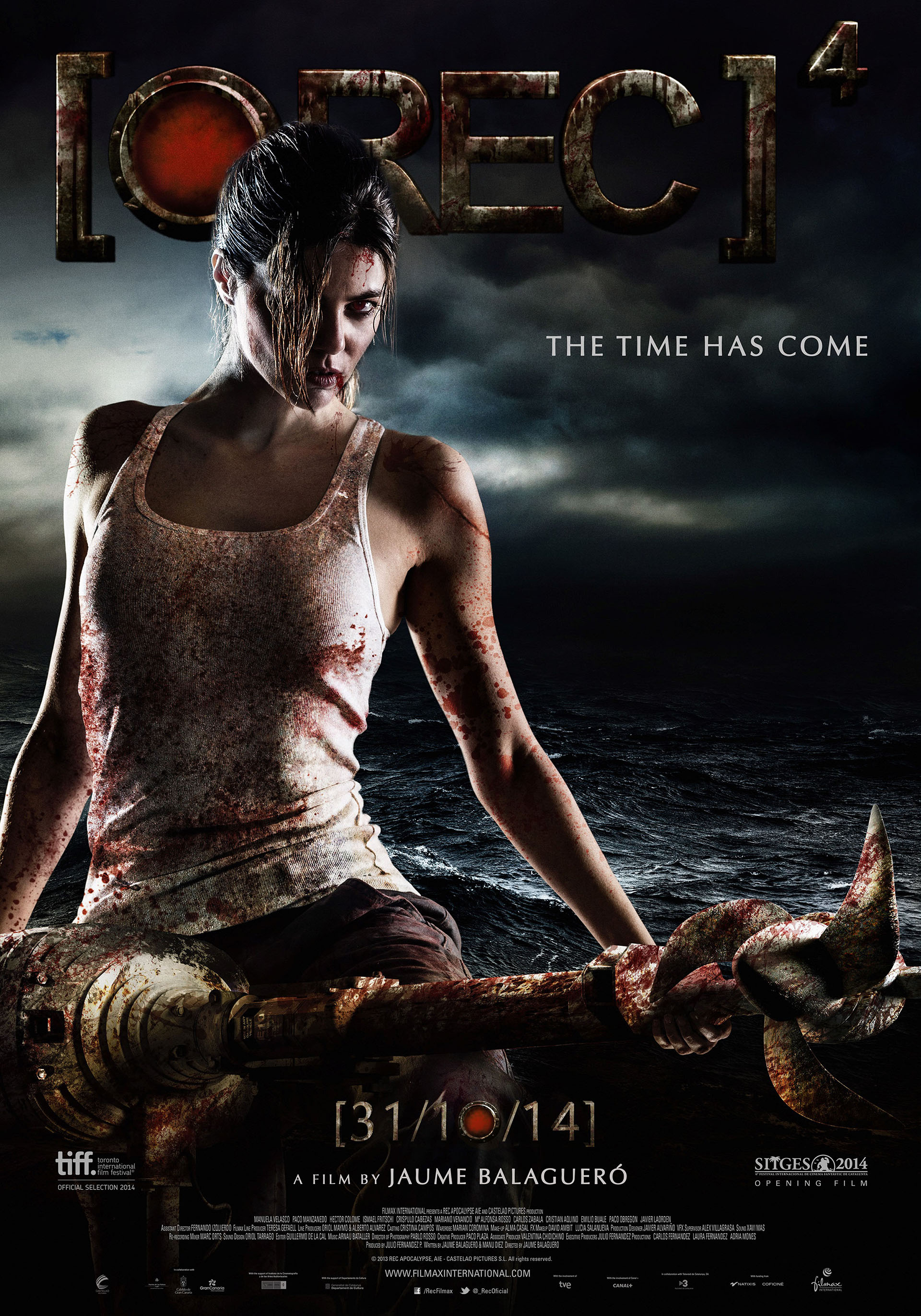 The [REC] series is quite an interesting one, one that doesn’t quite play by the rules of franchise horror. While the first two films were exceptional-yet-similar found footage affairs, the third installment completely shed the filmmaking style and went in a totally (and tonally) different direction, trading in the horror for horror-comedy.

Just released onto VOD outlets this past Friday was the fourth installment of the [REC] franchise, directed by series co-creator Jaume Balaguero. Sub-titled Apocalypse, the film kicks off directly after the events of [REC] 2, as reporter Angela Vidal is rescued from the infamously ill-fated apartment complex.

In this alleged final installment of the Spanish series, Angela is brought aboard a remote oil tanker for quarantine/observation, along with the soldier who saved her. It’s not long before the ship becomes a floating death trap, as the virus escapes and turns the crew into bloodthirsty monsters. Is Angela the cure for the madness, or is it possible that she is the disease?

In some way, [REC] 4 can be seen as an apology for the previous installment, which traveled a bit too far down the path of horror-comedy and was too much its own movie, in the eyes of many fans. As a stand-alone sequel, [REC] 3 is a whole lot of fun, but this fourth installment is quite frankly a much better [REC] 3 than [REC] 3 managed to be.

A real treat for those who didn’t quite care for Genesis, Apocalypse is in many ways a return to form for the franchise, very much worthy of hanging out under the [REC] umbrella. Though the location is different from the first two films, the ship has its own claustrophobic charms, calling to mind the apartment complex that was our gateway into this series. It’s a nice locational reference, and it’s also really nice to see that original storyline continuing, six years later – in the same way it was nice to see Myers come back, in Halloween 4.

That said, there is also a lot about this fourth installment that feels similar to its direct predecessor, as a whole lot of humor is infused into the proceedings and the found footage element has again been voted off the island – or the ship, rather. In that sense, [REC] 4 is somewhat of a mish-mash of all the previous films, throwing the two differing tones (horror and comedy) into a blender and whipping up a gory little treat that’s a fitting and wildly entertaining period to the sentence Balaguero and Paco Plaza have spent nearly a decade writing.

With a frenetic energy that doesn’t quit, Apocalypse is a nonstop thrill-ride from start to finish, the sort of zombie film that serves as the perfect antidote to The Walking Dead‘s slow-paced depiction of the apocalypse – not that there’s anything wrong with that. From undead monkeys to a boat propeller being turned into a brutal weapon, over the top fun is the name of the game here, and that’s precisely what Balaguero has served up with [REC]‘s swan song.

Like in the previous films, the characters in this one are a blast, including a computer nerd who’s a big time fan of Angela’s and a survivor of [REC] 3 who can’t seem to wrap her head around what’s going on. And then there’s of course Angela herself, who is perhaps the closest us horror fans have got to a modern day Ellen Ripley. Once again played by Manuela Velasco, Angela is a sexy heroine worth rooting for, and one of the truly great ‘final girls’ in recent years.

If there’s any complaint about [REC] 4 it’s that it doesn’t quite live up to its subtitle, as the film is much more confined than is suggested. Perhaps it’s simply because we were promised many years ago that the fourth installment would be the final one, but it’s hard not to go into this one expecting some sort of epic franchise finale. I wouldn’t quite call it that, though it’s nevertheless a solid end-cap to what has all around been an impressively solid series of modern day horror films.

Though it’s impossible to say whether or not the franchise is truly over – this isn’t the first horror series to proclaim such things, after all – I can’t say that I’d be disappointed if this was indeed the last time we saw Angela Vidal kicking some zombie ass. True, I’ve love to see her do it all over again, but I’m pretty happy with the complete painting that is the [REC] franchise, and I’m content with the way this final nail in the coffin was hammered.

Thank you for all the entertainment, Jaume Balaguero and Paco Plaza. You’ve made me laugh, you’ve satiated my cinematic blood-lust and you’ve even scared the living shit right out of me, in a way that few horror movies ever have.

I don’t know about you guys, but I can’t ask for much more from a horror franchise. And it’s nice to see one ending of its own volition, for a change.