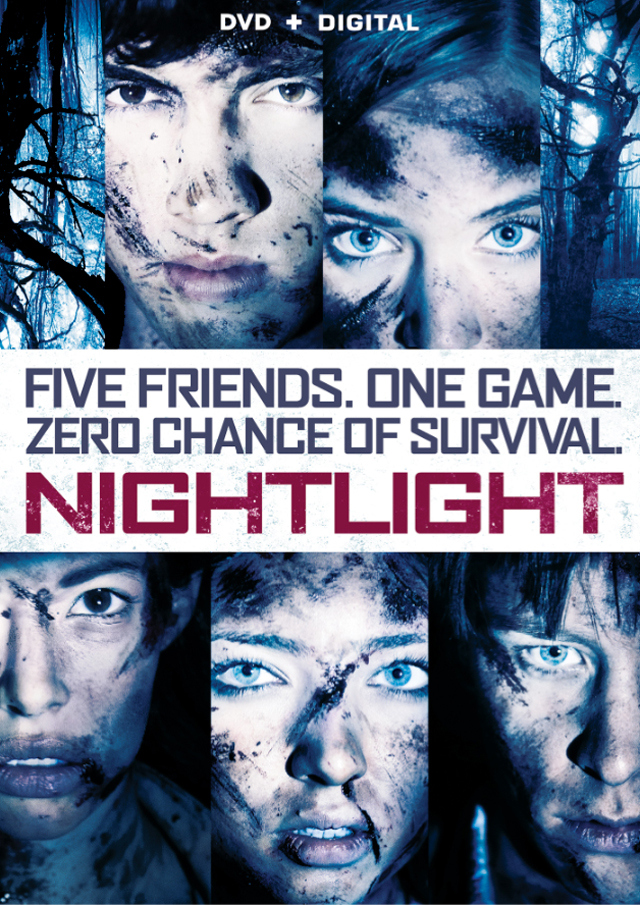 There’s currently no type of horror movie that fans are more tired of than the found footage film, which has been dominating horror cinema for just a tad bit too long now. Sub-genre pioneer The Blair Witch Project was released more than 15 years ago, and it’s a sad reflection of the genre’s inherent unoriginality that filmmakers are still trying to recreate the magic of that film.

Written/directed by the filmmaking duo of Scott Beck and Bryan Woods, Nightlight is set in the fictional Covington Forest, where many youths have gone to commit suicide. Five friends head out into the woods one night to play spooky games and see if the rumors of the forest being haunted are true, and as you’d expect, it’s not long before they find themselves pursued by a supernatural entity.

There’s often a good deal of internet debate about what makes a movie ‘found footage’ versus ‘POV,’ and though the two terms are more or less interchangeable, Nightlight makes a pretty good case for not being referred to as a found footage movie. And it’s really not one, at least on a technical level, because there’s no character in the film who is actually filming anything at all.

The concept behind Nightlight is that the entire movie is told from the POV of lead character Robin’s flashlight, which allows for the movie to side-step the ‘Why the hell are they still filming?’ question that found footage movies often make viewers ponder. When wandering out in the woods, you of course would never let go of your only source of light, so the flashlight POV is admittedly a pretty clever little gimmick.

Unfortunately, it becomes clear early on that the ‘flashlight as camera’ concept is not just a gimmick, but also a rather cheap one. The flashlight is treated like a camera in a found footage film to the point that you often forget it’s not a camera, and since it so obviously is a camera that the actors are wielding, the seemingly creative idea never amounts to much or helps the film stand apart from the POV pack.

Worse yet, Beck and Woods seem perfectly comfortable emulating found footage movies past, rather than bringing anything new to the table or having fun with the fact that theirs is – on paper, at least – a bit different from all the others. It doesn’t take long before Nightlight becomes a copy of a copy of a film that copied The Blair Witch Project, and it goes through the motions to the point of being a total bore.

Tropes and clichés are the name of the game in Nightlight, an 80-minute film that relies solely on the inherent creepiness of characters, both human and inhuman, walking around in the woods at night. To the film’s credit, the locations do lend some measure of spooky atmosphere to the proceedings, but this is nevertheless another uninspired movie plucked from that pesky Found Footage 101 handbook.

Being that POV movies tell stories from the perspectives of their characters, it’s surprising how few of them put any stock into character development. And Nightlight is no different in that regard, as the script never bothers to introduce us to any of the characters or make us like any of them. And I’m not even exaggerating when I say that the flashlight gets more character development than the humans do.

As effective as The Blair Witch Project was in squeezing optimum terror out of the simple concept of people walking around the woods, very few films that have followed in its wake have been able to do the same. Nightlight is merely the latest reminder that copying a past success story isn’t the way to make a good movie, and it’s also a reminder that it might be time for POV horror to take a nap.

But hey. Props to Beck and Woods for at least coming up with the flashlight concept. If only because Nightlight is the first and only movie to be filmed from the POV of a flashlight, I guess that makes it somewhat of a notable entry in the found footage sub-genre. So there’s that.