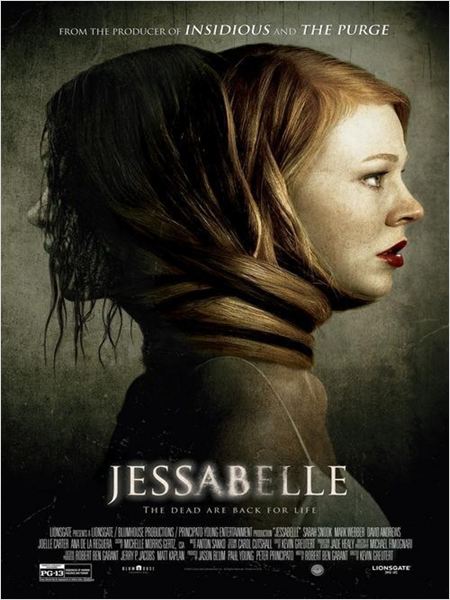 It’s never a good sign when a planned theatrical release is suddenly dumped to VOD outlets, which is precisely the fate that befell this latest effort from the ‘are you sick of us yet?!’ production company Blumhouse.

Originally, Jessabelle was set for widespread theatrical release in January of this year, before being pushed back to an August date. And then, as if they totally lost all faith in the project, Blumhouse again bumped the film, remanding it a limited theatrical/VOD release on November 7th.

Directed by Kevin Greutert, who helmed the sixth and seventh installments in the Saw franchise, Jessabelle was likely a victim of similar movies not doing so well at the box office, which would serve to explain the last minute cold feet from Jason Blum and company.

Sarah Snook plays the titular character in Jessabelle, a young woman recovering from a car crash that killed her boyfriend and unborn child. Forced to return to her childhood home in Louisiana, where she’s cared for by her father, Jessabelle discovers videos recorded by her deceased mother, which seem to indicate that a malicious spirit resides in the home.

The bummer of Jessabelle is that it starts off with promise, as the first 20 or so minutes are wonderfully restrained, with very little dialogue. Atmosphere is key in a horror film, particularly one of the ‘haunted house’ variety, and Greutert effectively sets the mood right from the get-go. The film is at its best in these opening moments, before anything really happens and when only fleeting glimpses of creepy things are seen.

Unfortunately, things do eventually happen. And none of them are good.

The more the mystery of Jessabelle starts to unravel, the less interesting it becomes, as each new reveal is plucked straight out of the Horror Movie 101 handbook. Blumhouse has become known as a label that specializes in horror films devoid of originality, and Jessabelle is nothing more than another one of those. You’ve seen this story before and you’ve experienced these scares before, making this a dull effort even for a company that thrives on dull efforts.

If there’s anything interesting about Jessabelle it’s that there’s a sub-plot involving voodoo, which seems to promise that the film is at some point going to rise above its lack of inspiration, and become something more than just another generic haunted house movie. Ultimately, however, that particular storyline is never really explored all that much, and the voodoo element turns out to be one that’s just kind of there for the sake of being there.

I’m trying to be somewhat kind here but the truth is that Jessabelle is just plain dumb, filled out by bad acting and even worse dialogue. Not for a second does anything about the movie or the characters feel genuine, and the pacing is as bad as everything else going on here. Scenes of horror are almost always followed up by scenes of the main characters acting like some crazy shit didn’t just happen, and the whole thing overall just couldn’t possibly be any less interesting or any more dull.

I of course don’t want to spoil the ending for anyone who hasn’t yet seen the film, but if you’re not laughing and rolling your eyes by the time Kevin Greutert’s name pops up on the screen, well… you will be. I’m pretty sure you will be.

Though Blumhouse continues to be a major player in the horror game, their formula has worn quite thin by now, and Jessabelle is perhaps the final nail in that coffin of mediocrity. Enough is enough, and it’s time for a change. Fortunately, it seems even they have finally made that realization, and I can only hope that the scaled back release of this movie indicates that they too are sick of the product they’ve now been peddling for years.

Nothing to see here. Nothing at all.