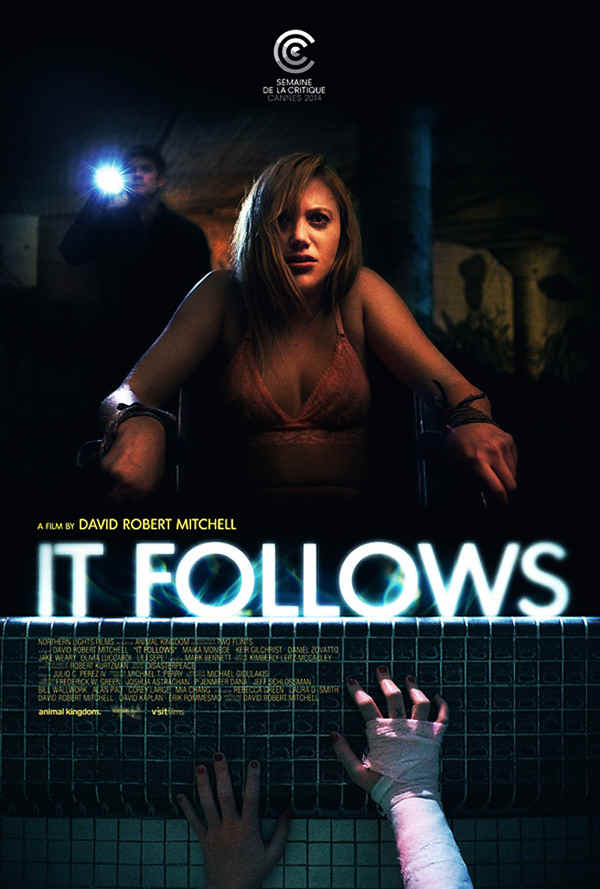 Every year there’s one horror movie that tends to stand head and shoulders above the rest, almost universally praised to the point of being widely considered the best of the year. Last year’s movie was The Babadook. And though we’re only heading into April, early indication is that this year’s standout horror effort is going to be It Follows.

Written and directed by David Robert Mitchell, It Follows centers on a young girl by the name of Jay Height (an exceptional Maika Monroe), who finds herself pursued by a mysterious force in the wake of a sexual encounter. She is being relentlessly followed by something, and the only cure, she is told, is passing the strange entity onto someone else.

Sex, in the world of horror cinema, is often a catalyst for death, with movie monsters seeming to have it out for those who can’t keep it in their pants. It Follows, rather brilliantly, takes that idea and attempts to ground it in some sort of reality, bringing to life a movie monster that doesn’t hunt down people who have sex, but rather is created by people having sex – and it’s killed the same way it’s created.

It’s no secret by this point that the movie’s villain is a physical representation of a deadly STD, as Mitchell’s film essentially gives such a virus a corporeal form. In doing so, he has created a horror movie that is unlike any other horror movie you have ever seen, and one that injects an endless barrage of new life into what is, at its core, a relatively familiar idea.

And there’s a whole lot to love about It Follows, as it’s visually striking to the point of being downright beautiful to look at. It’s the sort of movie where every frame looks like a piece of art, and every sweeping camera shot feels like a paintbrush being swiped across a canvas. What we have here is a genuine piece of art, and nobody can take that away from it.

Another standout gem of the film is the soundtrack, which comes courtesy of Disasterpeace. Exceptional horror soundtracks have been coming back in a big way in recent years, and It Follows is home to another that is John Carpenter-inspired and delightful to listen to. Even if you don’t like the movie, you’ll likely find yourself wanting to buy the soundtrack – yea, it’s one of those.

But the good almost always comes with the bad, and in the case of It Follows, the bad is that the overall style of the film completely takes center stage, while the substance is very much left on the back-burner. Though the movie is always beautiful to look at, and though the soundtrack is never not delighting the ears, it’s ultimately a gorgeous piece of art that doesn’t have all that much to say.

The idea of a sentient sexually-transmitted disease is without question a brilliant one, but the movie never quite explores or really even plays around with the idea. Instead, we’re treated to scene after scene of Height and friends being followed by increasingly disturbing visions, and though things get fairly creepy at times, there’s never really any depth to the proceedings.

Whereas a movie like The Babadook featured a monster that represented something way deeper than what was on the surface, It Follows reveals what the monster represents almost immediately, and then never delves any further into that idea. If Mitchell was trying to say something with the movie than that message went over my head, as it felt to me like a concept that he just didn’t know how to flesh out.

At around the one-hour mark, when we’re treated to yet another scene of Height being pursued by something only she can see, It Follows starts to drag and becomes downright boring, despite still being a visual and auditory feast. The concept devolves into little more than another movie about a paranormal entity, which is a shame considering the idea is so rich and ripe for deep exploration.

The other issue I had is that there’s very little mythology created for the STD-like entity, which leaves you questioning several aspects of what is actually going on. I don’t mind a movie that leaves things open to interpretation but It Follows frankly doesn’t explain enough, and its insistence on letting viewers fill in the blanks feels less like ‘open to interpretation’ and more like ‘lazy.’

I have no doubt in my mind that people will add their own meanings to It Follows and find deeper things hidden within it, which is all good and well, but I never got the sense that any of that rich subtext was actually present within the script – nor does it, in my mind, earn such deep interpretation. Maybe it was just drowned out by the blaring soundtrack, which is again wonderful though ever-present to the point of being overbearing.

It’s impossible not to respect David Robert Mitchell for what he’s created with It Follows, as it’s a genuinely original slice of horror cinema that we should all be consuming, talking about and supporting. It’s a movie you won’t soon forget, and it’s one that is guaranteed to spawn lots of conversation between you and your friends – which is more than can be said for most horror movies.

For me, however, It Follows is the very definition of style over substance.