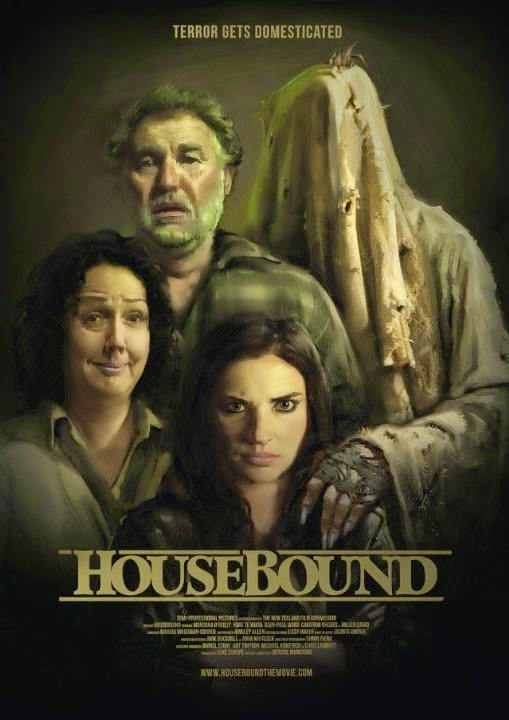 You’re unlikely to find a year-end ‘Best Of’ list that doesn’t have The Babadook on it, a film that was particularly impressive given the fact that it marked the directorial debut of Jennifer Kent. Another film garnering much praise on those same lists is Housebound, which is also noteworthy for introducing us horror fans to a brand new filmmaking voice.

Written and directed by New Zealander Gerard Johnstone, Housebound tells the tale of Kylie Bucknell, who at the start of the film is placed under house arrest after a botched robbery attempt. When the court orders her to spend the next eight months in her creepy childhood home, Kylie begins to realize that something strange is going on there, and her mother is convinced that they’re sharing the house with a paranormal entity.

On paper, Johnstone’s debut feature sounds like your run of the mill haunted house movie, though the reality is that it’s anything but. Housebound defies conventions and marches to the beat of its own drum from beginning to end, the story taking so many unexpected detours that you never quite know where you’re going to end up next. You simply can’t put a movie like this into a box, or quite frankly even classify it as belonging to any one genre/sub-genre, which is something to be appreciated.

Horror movies, particularly ones with a paranormal set-up, have become painfully generic and wholly predictable in recent years, and you need not look any further than this year’s theatrical output to know what I mean. That’s why it’s so refreshing when one comes along that refuses to play by the rules or stay inside any sort of neat and tidy box, and I greatly respect Johnstone for throwing the rule book out the window with his inaugural feature. Housebound is a film that’s rife with inventive and original ideas all its own, which nobody can take away from it.

But alas, all of the film’s twists and surprises are not without their downsides, as there are so many of them packed into the script that the film loses focus at times, dragging its feet when it should be getting to the point. There’s an unexpectedly heartwarming story at the center of the film, which presents itself in the stellar final act, but it’s so bogged down by everything else going on that the big reveal almost becomes secondary to all the other reveals. It’s a shame, really, because it feels like there’s a ring there that was never properly grasped.

Running 112-minutes long, Housebound could’ve greatly benefited from shedding 15 or 20 of those minutes, and trimming some of that fat off its bones. There’s almost too much going on here, and if I’m being honest I spent a good deal of the film’s runtime teetering on the brink of disinterest and mild amusement. Everything was neatly tied together in the end, forming a cohesive whole that I couldn’t help but appreciate, but I’d be lying if I said I was on board with Johnstone’s vision the whole way through.

Back on the plus side, Morgana O’Reilly is a delight as main character Kylie, her performance being the true highlight of the film. Kylie is the sort of bratty bad girl that you kinda can’t help but love, mostly because you know you’ll never actually have to deal with her, and O’Reilly is terrific in the role. I don’t think anyone will disagree when I say that Kylie is one of the downright best female characters in 2014 horror, a smart and ballsy fighter who does so much more than run, hide and scream. Nice to see, as always.

Equally impressive in their respective roles are Rima Te Wiata as Kylie’s mother Miriam Bucknell and Glen-Paul Waru as Amos, the security guard assigned with monitoring Kylie. They’re a blast to hang around with, both individually and together, and it is Waru in particular who brings a whole lot of humor to the proceedings. As it turns out, Amos moonlights as a bumbling ghost hunter, and he’s the sort of character you wish was around to liven up every movie of the paranormal variety.

On the subject of genre classifications, which I touched upon earlier, Housebound is being described by most as a ‘horror-comedy,’ which is somewhat of a misleading label. Johnstone’s script pulls a lot of humor out of otherwise unfunny situations, but this isn’t the sort of laugh-out-loud, buckets of blood horror film you might be expecting. Neither the humor nor the horror ever dominates the proceedings – rather, it’s an impressive balance of the two.

All in all, Housebound is fresh, unique and innovative enough to warrant its inclusion on many of this year’s ‘Best Of’ lists, even if I’m not so certain it’ll pop up on mine. Like The Babadook, it’s a debut effort that should make us all take note of its director, as Gerard Johnstone is one filmmaker that should be on every horror fan’s radar, going into 2015.