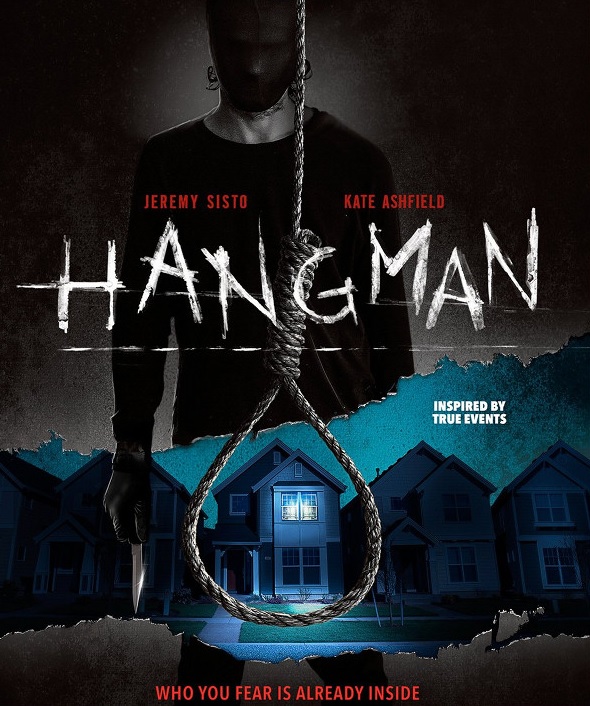 Nearly twenty years after The Blair Witch Project popularized the POV style, found footage films are still coming at us hot and heavy, though the smart ones understand how tired we are of the gimmick. It’s no longer enough to give a character a handheld camera and place him into a horrifying situation, and so the sub-genre has been forced to evolve in recent years. Sometimes all it takes is a slight tweak on the gimmick to make it feel fresh again, and this latest one comes armed with a deliciously creepy twist.

Written by Simon Boyes and Adam Mason, and directed by Mason, Hangman centers on the Miller family, who return home from an extended vacation to find their house ransacked. While they were gone, a mysterious stranger broke in and placed cameras all over the house, intent on filming their every move without their knowledge. And to make matters so much worse, the man is still inside the house.

The events of Hangman are documented by the cameras installed in the Miller family home, and sometimes by a handheld cam that the creep carries around with him, making this a found footage film not about people filming things, but rather about them being filmed. There’s something inherently voyeuristic about the POV gimmick, appealing to our modern desires to watch people’s lives unfold through the lens of a camera, and what Boyes and Mason bring to the table here squeezes optimum creepiness out of that admittedly strange desire we all seem to share.

Watching Hangman, you get the sense that you’re watching something you should not be, as we’re literally put inside the sick headspace of the villain. We see only what he sees, and Mason brings those voyeuristic home movies to the screen with a realism that reminds how effective the found footage style can be when it’s properly utilized. We watch the family sleep, take showers, and go about their daily lives, and it’s quite unsettling to play that figurative fly on the wall of their home.

As if the idea of being filmed without your knowledge wasn’t already terrifying enough, Hangman takes things one step further by having the villain literally move into the family’s home – also without their knowledge. He takes up residence in the attic, and whenever the family members go off to work/school or turn in for the night, we watch along as he moves freely around the house – wearing a stocking over his head and looking like a mix between Slender Man and Manhunter‘s Tooth Fairy. At times, he’s even lurking about while the family is home and awake, making for some genuinely tense sequences.

While much of Hangman works quite well, it’s unfortunately plagued by a lack of empathy for the characters. Since we’re watching everything from the villain’s POV, it’s hard not to feel removed from the family and their discomfort about the situation, and it doesn’t help matters that the character development is lacking. The Millers are likable – particularly Jeremy Sisto as the father – and they seem like a great family, but it’s just not enough to develop a strong bond with them.

Even at 80-minutes long, Hangman also finds itself running out of ideas around the halfway mark, as the creepiness of the premise starts to get long in the tooth and you realize there’s not much else going on here. The story is paper thin and entirely too predictable the whole way through, turning what could’ve been an exceptionally disturbing horror film into what ultimately amounts to a one-trick pony that relies entirely on its gimmick – but it is, I must remind, a damn good one.

At the end of the day, Hangman is sure to make you wonder about what’s going on in your house when you’re not there, and it’s the sort of movie that will continue to creep you out while you lay in bed and question if someone, somewhere, is watching you. Despite its shortcomings, those lasting effects make the film something of a treat in the realm of found footage horror. At this point, it’s hard to bring new ideas to the sub-genre, and Adam Mason has my respect for doing just that.