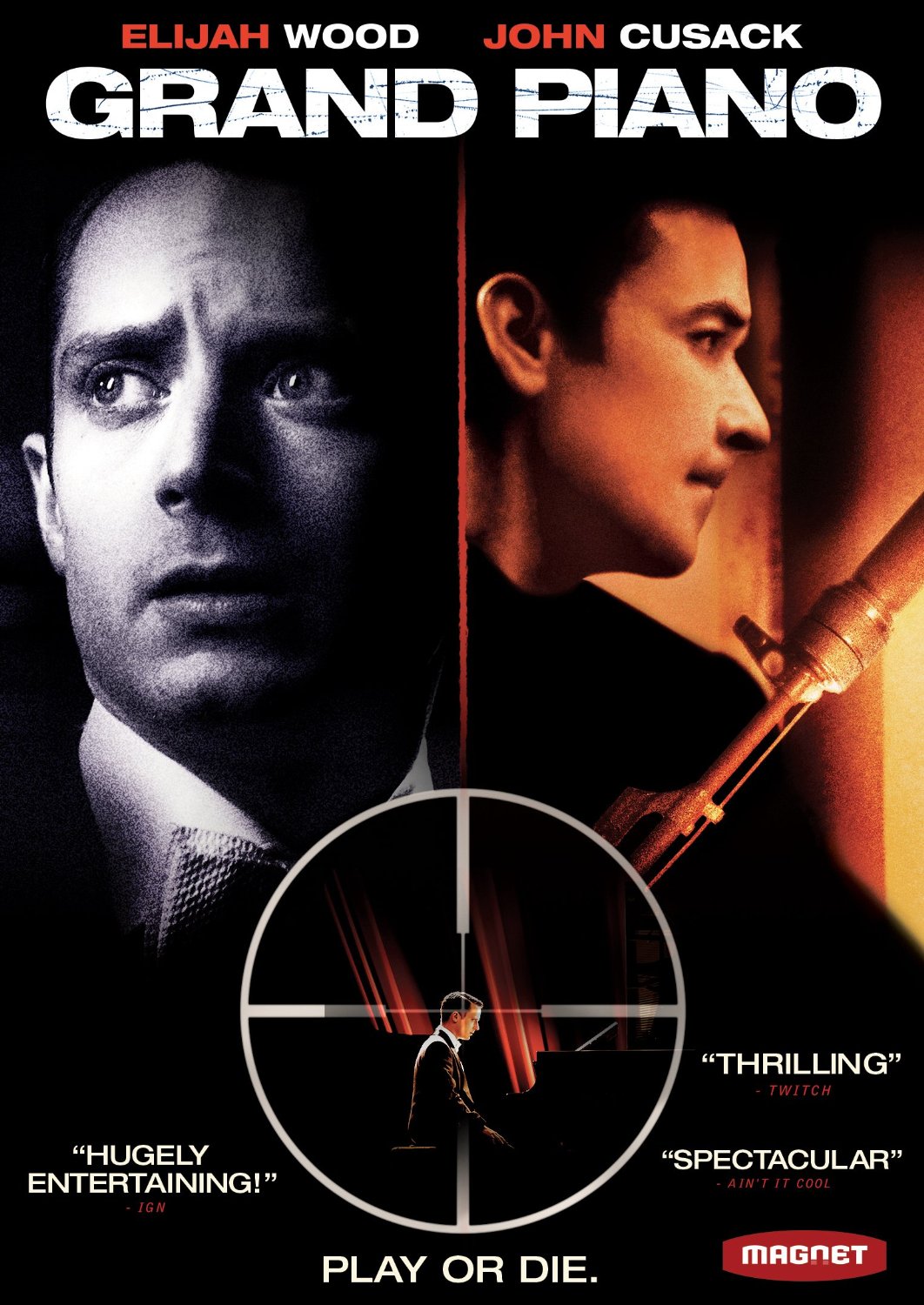 I’ve always been a fan of movies that primarily take place in one location and revolve around a simple premise, as it’s fun to see what clever filmmakers are able to do with their hands tied behind their backs, so to speak.

2010’s Buried immediately comes to mind, which takes place completely underground, with Ryan Reynolds finding himself buried alive at the start of the film. The entirety of the movie takes place inside that confined space, and it’s incredibly impressive what writer Chris Sparling and director Rodrigo Cortes were able to do with so little, as they somehow accomplished the seemingly impossible and crafted a suspenseful and highly engaging thriller out of the very limited concept.

Grand Piano, which hit VOD outlets a couple months back and was released on DVD and Blu-ray today, comes from that same school of thought, wringing optimum suspense and entertainment out of a simple idea that seems destined to bore, at least on paper.

Written by Damien Chazelle and directed by Eugenio Mira, Grand Piano stars Elijah Wood as Tom Selznick, a renowned concert pianist who has been suffering from a nasty case of stage fright for the past five years, after an epic botch that made him the ridicule of his peers… and, of course, the laughing stock of the YouTube generation.

After a five year hiatus, Selznick reluctantly returns to the stage in an effort to redeem himself, and his stage fright is cranked up to eleven when he discovers a note written on his sheet music just as he sits down to play, informing him that he will be killed if he incorrectly plays so much as a single note. The unseen killer (John Cusack) has a sniper rifle pointed directly at Tom, and he’s also instructed that if he runs away or seeks help from anyone, his movie star wife – who is in the audience – will suffer the same grisly fate.

Right off the bat, one thing that’s immediately noteworthy about Grand Piano is the visual style, which is sure to be mentioned in every review of the film – and rightfully so. The camera glides and flows around the action in a manner that’s as beautiful as the music emanating from between the protagonist’s limber little fingers, and the visual style of this short but sweet thriller is quite frankly worth the price of admission alone.

There’s one particular memorable moment which shows something going on up in the balcony of the concert hall, with the camera positioned in such a way that we also see Tom playing at the same time, which ends with a zoom-in only on the half of the screen that Tom is visible in. It’s a clever camera trick that seems to clearly be an homage to the split screen stylings of Brian De Palma – a fitting visual reference considering the film as a whole was no doubt inspired by De Palma’s thrillers.

It’s hard not to compare Grand Piano to De Palma’s work and equally hard for me to refrain from name-dropping Dario Argento, as the film is somewhat of a fusion between those two masters. And while it may not be as good as their best work, it’s certainly a fitting tribute, as well as a solid old-school thriller that reminds us that a whole lot need not be happening, for a movie to entertain.

Running just under an hour and twenty minutes, Grand Piano is both entertaining and engaging throughout, and though some silliness on display admittedly forces you to suspend disbelief just a wee bit – particularly in the moments where Tom is somehow talking, texting and making phone calls, while playing the piano – it’s certainly never boring, and because of that I never found myself with enough time on my hands to really care about the inherent silliness of the plot.

The way I see it, you’re either going to roll your eyes throughout Grand Piano or just strap in and enjoy the ride, and I encourage you to try to not over analyze, and just have fun with this taut little thriller. There’s a whole lot of fun to be had here, you just have to be willing to embrace the twists and turns, and enjoy that ride.

Can’t say I ever thought I’d be entertained by watching a dude tickle the ivories for an hour. So thanks for that, Grand Piano!