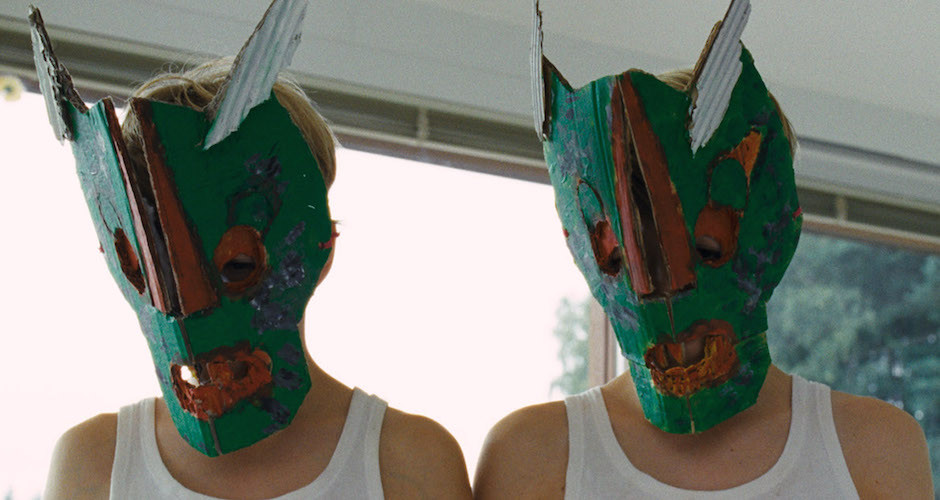 Ever since its festival debut last year, the buzz surrounding Austrian horror film Goodnight Mommy has been off the charts. When the creepy trailer hit a few months back, many were already praising it as the scariest movie of the year, and then there was all the “hype” generated by the announcement that the film had been submitted for a nomination at next year’s Academy Awards. Talk about must-see cinema.

Co-written and co-directed by Severin Fiala and Veronika Franz, Goodnight Mommy stars real-life twins Lukas Schwarz and Elias Schwarz as, well, Lukas and Elias, twin brothers whose lives are turned upside down after their mom returns home from having face-altering plastic surgery. When she starts exhibiting strange behavior, the twins begin to suspect that the woman in their home isn’t actually their mom.

Watching Goodnight Mommy, it’s not hard to see where much of the praise is coming from. Masterfully shot on 35mm by cinematographer Martin Gschlacht, the film is absolutely gorgeous, oozing with an art-house style that almost demands praise and deep examination. So too is Fiala and Franz’ debut feature incredibly well acted, boasting strong performances from Susanne Wuest and the young Schwarz twins.

Nobody can deny how beautiful Goodnight Mommy looks, and it’s also home to some of this year’s most memorable imagery. Her character’s face bruised, swollen, and wrapped tightly in bandages for much of the film, Susanne Wuest is immediately nightmarish, and simple moments like her observing her body in the mirror and taking a late night walk in the woods are sure to remain etched in your brain for some time.

And just wait until you see her unknowingly feast on a revolting meal.

Despite how appealing Goodnight Mommy is in the visual sense, the problem is that the story – and the particular methods of telling that story – leave much to be desired. The first hour of the film is a tedious drag, and though it was most certainly intentional, it’s so impossible to figure out what is going on that it’s hard to become invested in any of it. Worse yet, the movie’s big secret is painfully obvious.

It doesn’t take more than 10 minutes before you realize exactly where the story is going to end up, and though that again may have been an intentional choice, it’s hard to fathom why Fiala and Franz would choose to divulge that information so quickly. It’s almost as if they want you to know the “twist” long before it’s revealed, and the complete lack of a poker face sucks much of the tension out of the proceedings.

That said, what Fiala and Franz do incredibly well with the story is constantly make you question whose side you should be on. There’s undoubtedly something strange going on with the mother – if she even really is the mother – but the twin brothers also have some peculiar qualities of their own. With most horror movies, you instantly know who to root for and who to fear, but this one smartly plays around with that.

Alas, any suspense and mystery the duo build up in the first hour of Goodnight Mommy – and there is a bit of both, despite how dull it all tends to be – is tossed out the window in the final act, wherein the film becomes a gory exercise in hard-to-watch torture. The highly unexpected tonal shift does the movie no favors whatsoever, and the reliance on blood and violence seems to belie the potential depth of the story.

Ultimately, Goodnight Mommy is a frustrating movie, as there is unquestionably a compelling story to be found somewhere within, but it never really bubbles to the surface. The idea of young kids being terrified about the fact that their mother isn’t really their mother is a brilliantly horrifying one that could’ve resulted in a brilliantly horrifying film, and while many will find this one to be precisely that, I did not.

For me, Goodnight Mommy was an overly-artsy, obvious, and tedious experience.

As always, I encourage you to check it out and form your own opinion.