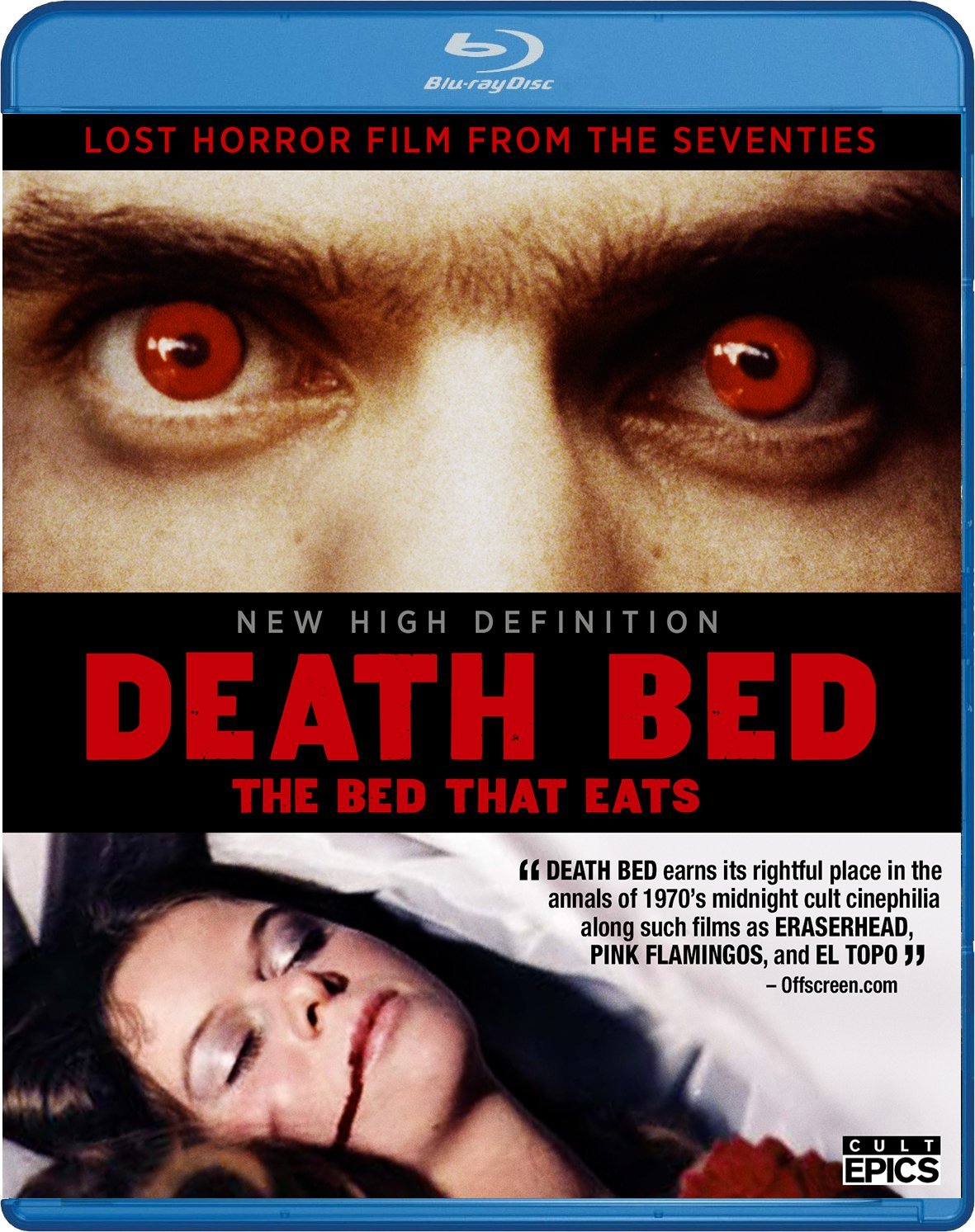 As much as I dig it when home video companies give slick new releases to old favorites that we all know and love, I dig it even more when they give that special treatment to lost films from the past, which many of us have never seen or even heard of.

Such is the case with the latest release from Cult Epics, which puts the 1977 film Death Bed onto Blu-ray for the very first time. Having previously released the movie on DVD back in 2003, the company just unloaded the Blu-ray on June 3rd, and I got the chance to give the disc a watch earlier today.

Broken up into four parts, with the aptly-named chapter headings ‘Breakfast,’ ‘Lunch,’ ‘Dinner,’ and ‘The Just Desserts,’ Death Bed: The Bed That Eats is the wildly whacky tale of a demonic carnivorous bed, which essentially consumes anything that it comes into contact with – be it cigars, books, bottles of Pepto Bismol, fried chicken or tasty human beings.

I’m sure you’re wondering what the logistics of this whole operation are, so allow me to explain. How it works is that when someone/something is placed onto the bed, it growls with hunger and then salivary foam bubbles to the surface, as if someone’s shaken up a bottle of Root Beer and then quickly twisted the cap off. From there, the object/person is sucked into the bed, and digested by the acidic juices that are contained within.

And yes, we get to see the whole digestive process, thanks to many shots that actually take us inside the bed’s GI tract. I trust you’ll believe me when I say it’s fucking wild. Absolutely fucking wild.

The long lost 70s gem kicks off with an epic 10-minute opening sequence showing the complete consumption of a love-making couple and then segues into the arrival of three ill-fated young ladies, who are also consumed one-by-one by the world’s most evil inanimate object.

And that’s really all that’s going on here in terms of Death Bed‘s plot, aside from several flashback sequences which detail the most bizarre origin story in the history of origin stories…

The bed was created by a demonic force that resides in a tree, you see, for the purpose of seducing a pretty young gal that the demon was smitten with. In a tragic twist, she died upon seeing the demon in his red-eyed human form, and after droplets of his bloody tears made contact with the ordinary bed, it became a vessel for his demonic spirit. Since that fateful day, the bed has had an insatiable appetite, with no limits to its hunger.

Oh and did I mention that there’s also a dead guy living behind a painting of the bed, in the room where the titular Death Bed resides? Story goes that the man was one of the victims of the bed, but since he was deathly ill at the time of his consumption, the bed resigned him to a fate of being locked behind one of his paintings, rather than fully digesting him. So there he sits behind that painting, looking on in disgust as the bed chows down on everything in sight. It’s through the man behind the painting that we learn the bed’s origin story, as he narrates the majority of the film.

I’d say you can’t make this stuff up, but someone did. His name is George Barry, and he’s either one of the most brilliant cinematic minds to ever pick up a camera or a total nutjob that should be locked away. Either way, what he created with Death Bed is nothing short of the most off the wall film I’ve ever had the pleasure – or is it displeasure? – of sitting through, and an experience that I’ll likely never forget.

This is the kind of movie that you just have to see for yourself to even believe, as the experience of watching it is essentially indescribable. As a result, it’s almost impossible to even review or adequately convey one’s feelings about the film. Straddling the line between being an insufferable piece of shit and the most awesome movie ever made, Death Bed is truly an experience unlike any other, more deserving of the ‘best worst movie’ title than even Troll 2.

Quite frankly, you haven’t lived until you’ve seen a bed eat things, and it’s for that reason that I highly recommend you seek Death Bed out. It’s not a good movie by any means, in fact it’s a chore to even make it through the whole thing, but it’s an experience that every horror fan should be able to say they’ve had, before shifting off this mortal coil. So thank you for digging the movie up and breathing new life into it, Cult Epics.

If you’re tired of generic horror movies and you want to see something completely original, the kind of oddball work of art that could’ve only been made by a dude with a few screws loose and presumably an ample amount of drugs in his system, then track down a copy of Death Bed and enjoy. At the very least, you’ll be glad you crossed it off your movie-watching bucket list.

Cult Epics’ Blu-ray release includes a brand new HD transfer as well as brief introductions by both George Barry and Stephen Thrower (author of the book Nightmare USA), a 15-minute conversation between the two, a 7-minute behind the scenes featurette, and the original music credit track.