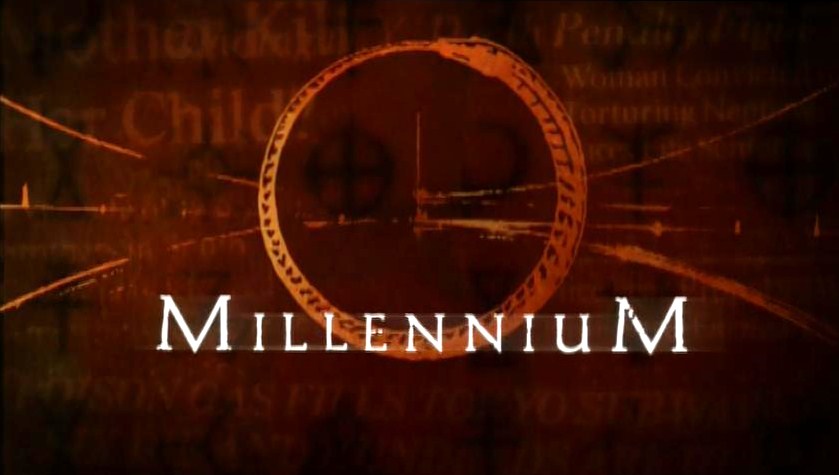 Millennium is another unfortunate example of an amazing, superb TV show being canceled.

Millennium is often described as an X-Files spin-off, but that’s really not accurate. In fact if anything, an X-Files episode, appropriately named “Millennium” (season 7, episode 4), was a spin-off of Millennium or a hybrid, clash of the two shows.

Despite several similarities due mostly to a lot of the same creative and production people being involved on both shows, Millennium was an entirely unique and original inception not based on anything or any character previously established on X-Files like The Lone Gunmen spin-off.

There were a few hints throughout the Millennium series that the two shows existed in the same universe, one easy-to-miss cameo by Mulder and Scully was made in the first season (episode 18, “Lamentation“) as Frank Black (our protagonist, played wonderfully by Lance Henriksen) passed Mulder and Scully on the stairs in the FBI Training Academy building at Quantico, Virginia:

Surprisingly, this cameo was only ever briefly and vaguely mentioned, but was never covered or shared with an image or video that I could find until I uploaded the above video.

The X-Files — The establishing TV series of this universe created by Chris Carter. A main storyline following strongly the conspiracy of the known existence of aliens and the cover-up of such knowledge, but more than anything, the show was really a horror anthology with many great stand-alone episodes revolving around urban legends, myths, and monsters.

Millennium — From a creative standpoint, let’s just call this a serious spin-off of X-Files. Very dark, grim, and mostly rooted in real human, serial killer horror, void of Mulder-esque wise-cracking and fantastical elements kept to a minimum. Although there was some legitimate confusion over whether Frank was a psychic or just an incredibly talented criminal profiler with an unknown “gift”. There were also demons, angels, and other oddities sprinkled throughout. After watching the special feature interviews, it’s clear that a lot of this back-and-forth was due to Chris Carter being busy with X-Files off-and-on and other writers taking things in different directions.

The Lone Gunmen — From a creative standpoint, let’s just call this a comedic spin-off of X-Files. A goofy ragtag team of computer nerds often getting in over-their-heads.

The Wire — According to this article, The Wire also exists in the X-Files universe. I’ve only watched the first episode or so, but this appears to be completely grounded in normal human crime with no fantasy elements whatsoever.

The After — There’s really no saying, you never know what Chris might do with his writing. I’m about to watch the pilot, which is apparently an Amazon Original test to see if the show should be picked up. The After is a sci-fi drama so it’s not unreasonable to imagine that it might also exist in the same universe as do all of the others. According to this article, it does exist in the same universe, though I’m not seeing any official sources for that. Watch the Pilot Now

UPDATE — After watching the pilot of The After, which appears to be taking place in an unknown end-of-the-world type scenario, and seeing the Ouroboros symbol, which is prevalent throughout Millennium, I’m thinking (hoping) they must be connected. If the show ends up getting picked up for a whole season, I wonder if we’ll end up seeing a special appearance from Frank Blank, played by Lance Henriksen who in the Millennium DVD interviews expressed a strong interest in continuing the story.

Call my mind officially blown. Did I miss any shows that might also be apart of this universe?

I remember speculation and rumors to whether or not Fringe existed in the same universe and whether there might be a possible Mulder and Scully cameo, which after watching Fringe, beginning to end, I didn’t see any such connections. I think, however, the shows were just very similar and both aired on Fox.

As always, and the same goes for anything I write, correct me if I’m wrong please!

What started as a simple Millennium article, has turned into a much deeper discussion of the overall universe itself.