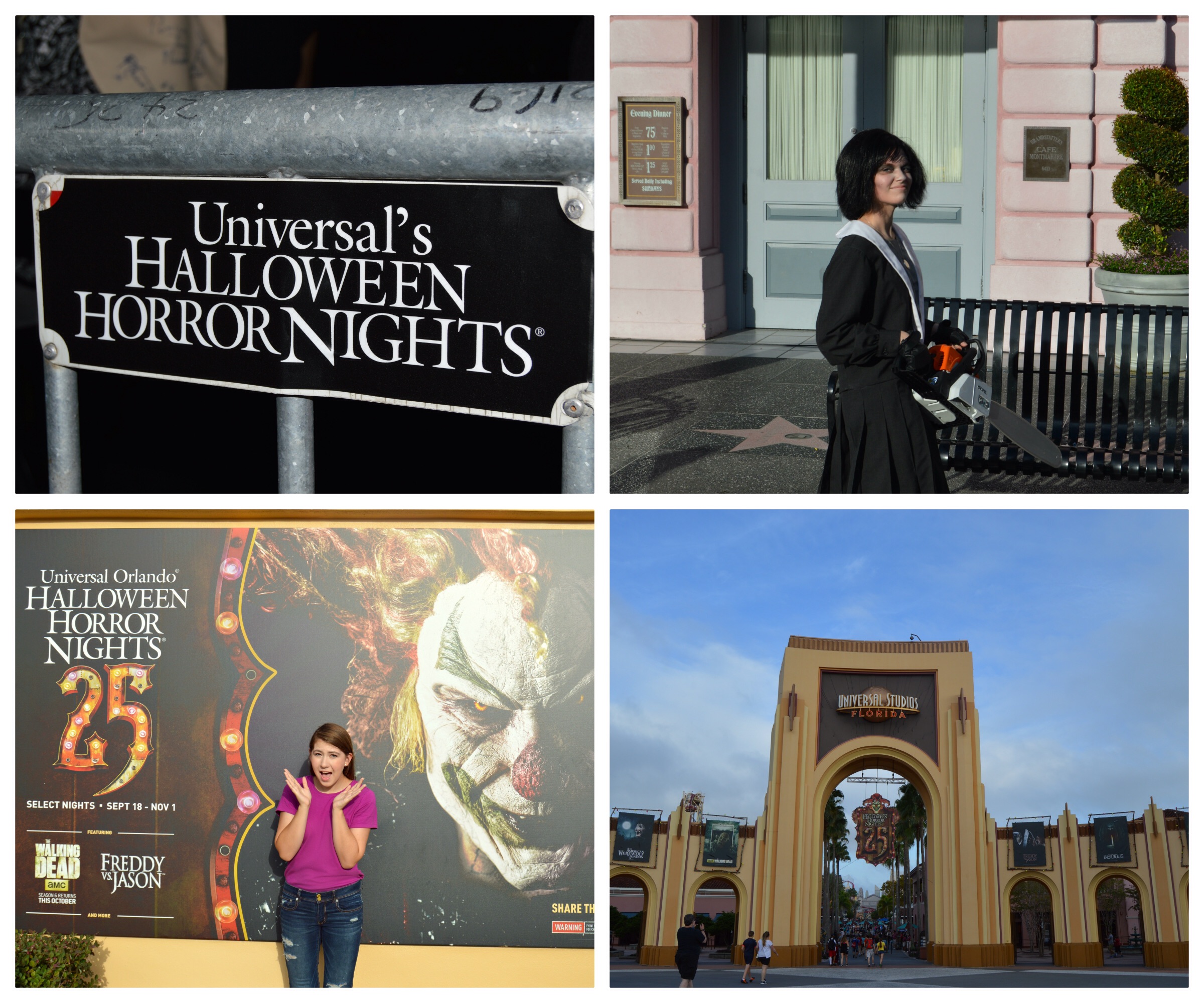 Zombies, vampires, werewolves, chainsaw killers… are you ready to face your fears? Every fall, Universal Studios converts the working studio back-lots into themed houses and mazes for the incredible Halloween Horror Nights. This year was the 25th anniversary of Halloween Horror Nights at Universal Studios Orlando, making the annual celebration extra special. Even though I lost my voice screaming, I had the best time ever.

Last year was my first year attending Halloween Horror Nights, so I thought this time around I would be a pro.

Who was I kidding?

I only watch scary movies with the lights on. If I hear a noise when everyone else is asleep, I’ll assume it’s a murderer. I took a hiatus from the babysitting business after seeing the teenage babysitter (aka Jamie Lee Curtis) targeted in John Carpenter’s iconic film, Halloween. As you can probably tell, I’m not very rational when it comes to horror situations. I was scared to even click on the Halloween Horror Nights website; this was the first indication that I was in for an intense evening.

This year, there are 9 themed houses, 5 scare zones, and 2 outrageous shows, and I managed to survive it all but not without some serious chills and thrills! Earlier in the day I visited Universal Studios and thought I would know the terrain for that evening, but I was amazed at how different the park looked at night! It was such a contrast. Where there was once a recreation of Hollywood Boulevard, complete with restaurants and shops, there was now a scare zone full of Halloween Horror Night icons.

As I walked (or more specifically, was chased) through the theme park, I wondered, “What happened to the relaxing waterfront I was eating ice cream at 4 hours ago? Where are the cuddly Despicable Me minions?”

Everything was completely transformed! One of the houses, Asylum in Wonderland 3D (a twist on Lewis Carroll’s classic tale, Alice in Wonderland), was actually located in part of the Shrek attraction queue. Most people would never be able to guess, because the walk-thru inside was reconstructed and drastically changed. Not a green ogre in sight! Regardless of the fear I was facing at Halloween Horror Nights, I had a scary good time!

Even a scaredy cat like me can enjoy and appreciate the thoughtful storytellers and meticulous details that go into every single attraction. It’s an immersive experience like no other.

The 9 haunted houses include licensed themes such as Freddy vs, Jason, The Walking Dead, Insidious, The Purge, and An American Werewolf in London. I especially enjoyed the houses and attractions based on franchises, because I think entering a story that you have an established history with is pretty extraordinary. Universal Orlando’s creative development team goes to extreme lengths to stay true to each story. For example, the wallpaper in the Insidious house is an exact replica from the film. Universal had the identical wallpaper custom-made. This small detail enhanced the overall set design.

My favorite house was Freddie vs. Jason, where you actually have the opportunity to walk through legendary 1428 Elm Street and experience infamous Camp Crystal Lake. Additionally, I really enjoyed The Walking Dead: The Living and the Dead, where I found myself re-living moments from the last season of AMC’s hit TV show, The Walking Dead. Get ready for your starring role, because you’ll truly feel like you’re making an appearance on the television show as hordes of walkers (aka zombies) follow you throughout sets.

Halloween Horror Nights also offers original content like Jack Presents: 25 Years of Monsters and Mayhem, Asylum in Wonderland 3D, Body Collectors: Recollections, and Run: Blood, Sweat, and Fears. In addition to these spectacular houses, you can’t miss the scare zones as they are scattered throughout the amusement park. The 5 featured themes in the scare zones are: Psychoscareapy – Unleashed, ICONS – Halloween Horror Nights, Scary Tales – ScreamPunk, All Nite Die-In – Double Feature, and Evil’s Roots.

Last but not least, you’ll be able to take a breather and watch 2 live shows. These shows differ greatly, from the hilarious, satire-filled Bill & Ted’s Excellent Halloween Adventure to a more treacherous option, The Carnage Returns, featuring Jack the Clown.