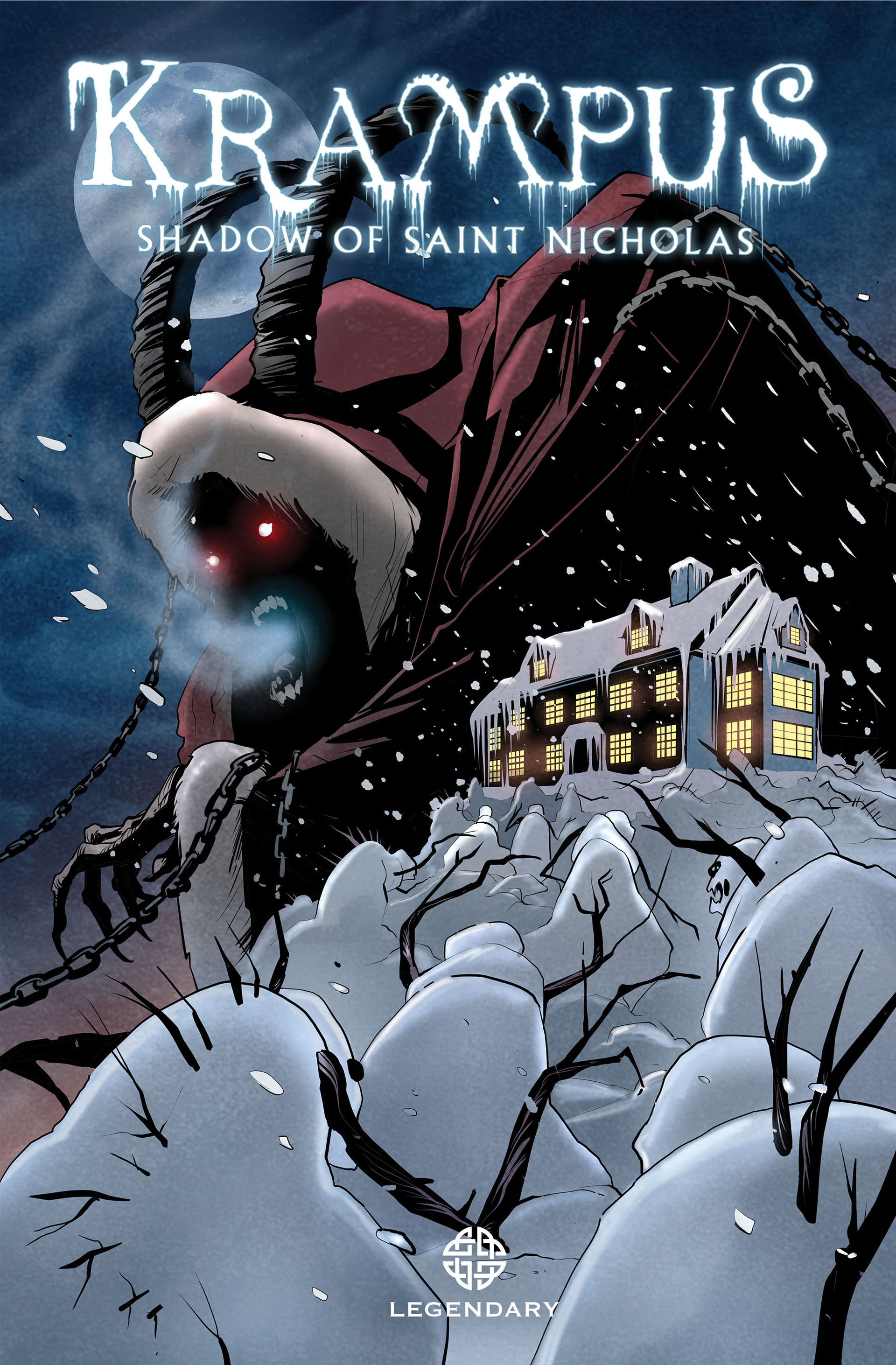 The growing popularity of Krampus has been almost palpable in recent years, and it was only a matter of time before the Christmas beast broke on through into the mainstream. On Friday, December 4th, Trick ‘r Treat writer/director Michael Dougherty brings the shadow of Saint Nick out of the shadows and onto the silver screen in the form of Krampus, one of the first feature films to center on the so-called Anti-Claus.

Ahead of the release, Dougherty and Krampus co-writers Zach Shields and Todd Casey – along with some of the top artists in the game – have unleashed Krampus: Shadow of Saint Nicholas, a graphic novel anthology that serves to get us up to speed with what the titular character is all about and whet our appetites for his upcoming reign of big screen terror. To do so, they’ve concocted three tales of holiday horror.

Oddly enough, the individual stories don’t actually have titles, but the first one centers on a miserable, drunken mall Santa who is haunted by his past. The grouchy war veteran finds a reason to be useful for a change when Krampus and his evil minions – including sinister “elves” and all sorts of mischievous toys – invade the mall, as he realizes he’s the only one who can save the small group of children locked inside.

There’s a theme of redemption running through Shadow of Saint Nicholas, and the first story sets the tone for what ends up being a collection of unexpectedly dark tales. But despite touching on very serious matters, such as the damaging effects of PTSD, the first of three is way more fun than the others – aside from a depressing, abrupt ending. There’s just something about seeing a drunk mall Santa kick ass and save kids that does it for me.

In the second story, we meet a cop who can’t get over the tragic accident that took her sister’s life many years prior, which she blames herself for. It has become her personal mission to track down the man responsible and make him pay, though in the meantime she’s got other bad guys to catch. On this particular night, she arrests a man stealing gifts, and soon after runs afoul of Krampus’ hellish minions.

Whereas the art panels in the first story are colorful and vibrant, they’re much more drab in the second, and the story itself is also quite a bit darker. One could argue that the Christmas creatures were crow-barred into this one, as they don’t really play all that much of a role in the central story, but it’s nevertheless the most well-written of the three. Packed with genuine pathos, it’s a damn good tale.

In the final story, a group of homeless friends are driven out of the building they’ve been squatting in by Tad Ferguson, a wealthy man who orders the decrepit house to be bulldozed so that he can build a retail store on the property. With no place left to go, the squatters decide to break into Ferguson’s own home, and it’s not long before he shows up and holds the intruders hostage. But Krampus has other plans for them all.

As you might have guessed, the final tale is inspired by A Christmas Carol, with Ferguson playing the role of Scrooge. Like in that classic story, he’s taken on a journey through Christmases past, which is where things get a little too wacky for their own good. I found this one a bit hard to follow, not to mention nonsensical, and the art style didn’t do much for me either. In the end, it mostly left me scratching my head.

Shadow of Saint Nicholas is capped off with a brief epilogue that ties the three stories together, ending things on an upbeat note by showing that all isn’t exactly what it seemed to be. Given how depressing the tales tend to get, it’s nothing if not a welcome change of tone. The epilogue also provides insight into the way Michael Dougherty views Krampus, who seems to protect Christmas the way Sam protects Halloween.

More than anything, Shadow of Saint Nicholas gives us a sneak peek at the world the Krampus film is set in, and the teases of the various creatures – not to mention the big guy himself – should leave most readers hungry for more. It expands on the mythology without spoiling any of the movie’s fun, and though the stories are a bit dour, the whole thing comes together nicely in the end and imparts wholesome holiday cheer.

An enjoyable time killer while we wait for the movie, if nothing more.