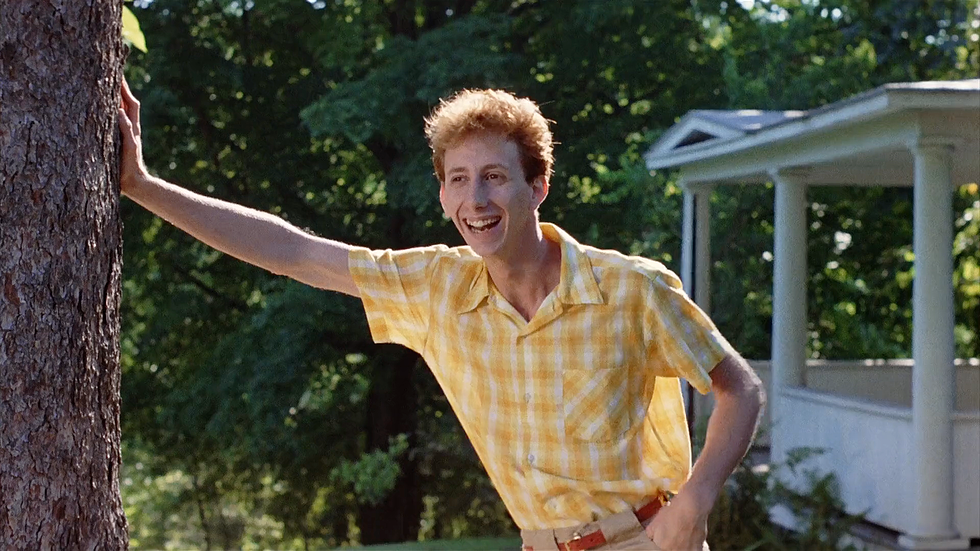 From the moment we meet Ted (Stu Charno) in Friday the 13th Part 2, it’s clear that he’s the character tasked with being the so-called comic relief. The token goofball, Ted immediately establishes himself as such by playing a prank on his fellow counselors, and there’s nary a moment in the film where he’s not telling a joke, making funny faces or playing more pranks. He’s a slasher movie victim, if there ever was one.

By 1981, the rules of the slasher film had already been firmly established, and the previous year’s Friday the 13th played no small part in hammering those unwritten guidelines into the brains of horror audiences. The basic formula is that a group of attractive young friends run afoul of a killer, and after they’re brutally knocked off one-by-one, the seemingly helpless “final girl” saves the day and avenges the dead.

In Friday the 13th Part 2, the final girl is Ginny Field, who outsmarts Jason at the end of the film by pretending to be his mother. At his most vulnerable, Ginny strikes the masked maniac with a machete, surviving the night’s ordeal and living to see another day. In typical slasher fashion, Ginny ends up being the only character who really matters, as the rest of the gang was simply there to up the body count.

Slasher 101, right? Well not exactly. Because loveable nerd Ted doesn’t die. And what’s even more remarkable about the character, making him one of the most unique in the sub-genre’s history, is HOW he survives.

Around the 45-minute mark, Ginny’s boyfriend Paul comes up with the idea of heading out to the local bar to kick back with a few beverages and enjoy one last night of fun before all the kids arrive, and comic relief Ted tags along as the third wheel – because of course he does. Unlike Ginny and Paul, who slowly savor a couple beers apiece, Ted gets blackout drunk, pounding back no less than eight brewskies.

As the counselors back at camp are slaughtered left and right, Ginny, Paul and Ted discuss the legend of Crystal Lake, and when the two lovebirds decide to return to the campgrounds, Ted makes the highly unexpected decision to stay behind. He’s in full-on party mode, you see, and he wants to hang out until last call. When the bar closes up, Ted promises Paul, he will stumble back to camp and join the others.

In one final scene, we see a drunken Ted ask a fellow bar patron if there are any after-hours places nearby, implying that he plans on staying out even after the bar closes, and then we never see Ted again. At the point the scene takes place, a solid 22 minutes are left in the film, though the remainder of Ted’s night is a total mystery. He presumably continues partying, and by all accounts doesn’t get killed.

It’s of course incredibly strange for a movie to develop a character and then never bother to tell us his fate, and one could chalk that up to bad writing, but what’s interesting about Ted’s particular method of survival is that it completely defies the rules and expectations of slasher cinema. Not only does Ted, the goofy nerd, have no business surviving, but he survives, in so many words, because he plays the victim.

Anyone who has seen their fair share of slasher movies has surely picked up on the fact that drinking, having sex and just generally being a partier is the easiest way for a character to guarantee his or her death in a body count flick, but it’s oddly enough BECAUSE of Ted’s heavy drinking that he makes it through the night. To my knowledge, he’s the only slasher character whose survival, rather than death, is alcohol-fueled.

Ted doesn’t bravely fight Jason or cowardly run away from the camp, he simply decides to get drunk all by his lonesome – and it’s this decision, one that bucks sub-genre expectations, that makes him a slasher movie victim who somehow manages to not become a slasher movie victim. There’s almost a self-awareness to the character, intended or not, as he seems to know what to do in order to survive the slasher film he’s in.

It’s easy to overlook Ted because of the way he’s unceremoniously written out of Friday the 13th Part 2, but make no mistake that he’s one of the smartest and most unique characters in the entire franchise. Not only does he bring the laughs, but he also manages to become the series’ first “final guy,” and though the film never bothers to acknowledge or celebrate his unlikely victory, we hope that you will join us in doing so today.

We love you, Ted. Happy Friday the 13th.